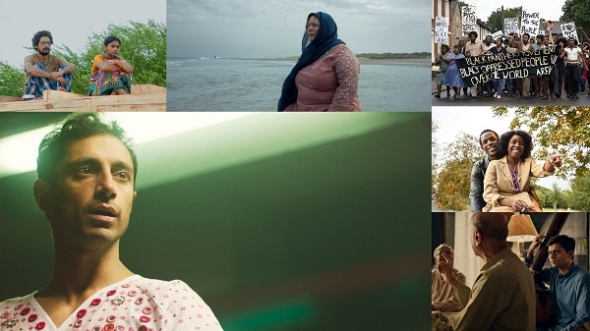 IT MAY HAVE been smaller and more compact, but London Film Festival (October 7-18) still packed a punch.

We were able to cover the festival online, though like some festivals LFF was hybrid (a mix of physical screenings and digital offerings) this year – no early morning risings to attend press screenings in Leicester Square for the biggest films.

Instead, we had to watch on the industry and press viewing platform and only had a 60-minute window to do so, mostly.

Those practicalities aside, two British films stood out for www.asianculturevulture.com and the one from Bangladesh, ‘The Salt in Our Waters’ was a cogent reminder that our world is smaller than we think and film is just one way of bridging differences – and addressing all forms of inequality.

Equally affecting – but from a different perspective was Chaitanya Tamhane’s ‘The Disciple’ from India.

As a site that covers Indian classical music, it was thrilling to see this world recreated for the big screen, both in its glory and ignominy…(the film reminds us).

It didn’t have the inadvertent humour of Tamhane’s debut ‘Court’ (2014) but it did show that the plight of Indian classical musicians in modern India is not an easy one.

Riz Ahmed and Bassam Tariq’s ‘Mogul Mowgli’ has much to recommend it – not least because it seems to open on a door and excitingly introduce a new generation of filmmakers onto the global stage.

Ahmed and Tariq wrote the film together and it is such a rich film that it will and should be with us for many years.

It premiered in Berlin early this year where www.asianculturevulture.com’ s Suman Bhuchar was able to hear both Ahmed and Tariq talk expansively about their film and the ideas that inspired it.

The depth of the conversation (it was a journalists’ roundtable) is remarkable and British critic Kaleem Aftab explored some of the same themes with Ahmed in an hour-long LFF talk with the actor (see link below).

Considering this is the pair’s first film, we’re hugely excited about the next film – Tariq spoke to acv about ‘Mogul Mowgli’ at an LFF tea and we also have interviews with two of the younger cast, Anjana Vasan who plays Zed’s business manager and friend, Vaseem, and Nabhaan Rizwan, who is Zed’s rival and associate, ‘RPG’ in the film.

‘Mogul Mowgli’ gets a UK and Ireland cinema release on October 30 – and well worth supporting – because we need to see more films like this.

In a similar vein, ‘After Love’ too deserves much attention and affection.

Aleem Khan’s tale of two families learning about each other following a bereavement is beautifully assembled and very poignant.

Khan participated in two talks at LFF and is an articulate and admirable new voice and very much worth following and engaging with – we hope the film fraternity and the mainstream in the UK will embrace him.

He hails from two large minority communities (of mixed heritage and orientations) and derives inspiration from as a result – but this is no reason to compartmentalise him or his films.

Please, don’t do it.

His film was headed to Cannes and it’s a shame in some ways that the world did not get to appreciate this film in the way we did in London and the UK.

‘After Love‘ has deeply autobiographical elements – though the story is entirely fictional and it is this closeness to the material and the culture that gives this film its power and authencity and marks him out as another exciting young and new British filmmaker.

Both these films – interestingly to be distributed by the British Film Institute (BFI) – show new facets of British life. After Love is due for a Spring 2021 cinema release in the UK – let’s hope it gets to travel the world a bit too.

Of course, these cultural elements of British life have been here since the post-war period and immigration from the Commonwealth.

And yet our big screens rarely give any indication that Britain is a multi-cultural country and has been for many years now and that British culture is changing.

While this may not be the place to discuss the term, British Asian, we feel it makes more sense to talk about these as simply British.

In the same way, it was brilliant to have two instalments of Steve McQueen’s much anticipated ‘Small Axe’ anthology series at LFF.

We will have more on this – ahead of its BBC One screenings from mid-November.

Looking beyond Britain, ‘The Salt in Our Waters’ was an excellent watch – the cinematography and the story itself – though perhaps a tad predictable – was a reminder of another huge global challenge that has not gone away – Climate Change.

It showed traditional communities at threat from changing weather patterns and sometimes they remain caught up with superstition and the power of one over the many in using traditional practices to continue to exert power.

Director Rezwan Shahriar Sumit is another exciting voice – this was his first feature and his script won the admiration of Spike Lee who endorsed it. The film is one of only a handful of films granted a Spike Lee Fellowship.

Sumit (as he prefers to be called) took time out to talk about this, the ideas behind the film and the future in an acv zoom. Check our social media channels or subscribe to our Youtube channel not to miss this interview with Sumit – who incidentally was able to raise funding through Film Bazaar (the market section of International Film Festival of India – which has been moved to January 16-24 2021 from its usual November dates and Bazaar will be hosted at the same time).

Like several other films that screened at LFF, Sumit’s film is now heading to the delayed Busan International Film Festival (October 21-28) in South Korea – though international filmmakers will not be attending due to the Covid pandemic.

More generally, Mads Mikkelsen was terrific in ‘Another Round’ and perhaps unsurprisingly, the film won this year’s LFF Audience Award.

A film about mid-life blues and trying to drink your way out of it – looks both silly and fun – and it is, but there are consequences – as anyone who has drunk with reckless abandon will know to their detriment.

The Kierkegaardian overtones put the film on another level, as does its lush look – both when it is miserable and unforgiving and utterly joyous, in inebriation.

ACV critics also enjoyed ‘200 Metres’ and ‘Limbo’ – showing that refugee drama does not have to be bleak and depressing.

Of the documentary strand, ‘Ultraviolence’ and its links to the current Black Lives Matter movement should not be underestimated. Personal, angry and caringly amassed, it deserves to be seen and the women are stars who should be heard and respected everywhere!

And both ‘Bloody Nose, Empty Pockets’ and ‘Time’ had much to say about the times we are all living in.

Among the shorts, we looked at three with vital angles for us and all with strong British connections – do see ‘Stray Dogs Come Out at Night’, ‘Happy Thuggish Paki’ and ‘Jambo Cinema’ when you can.

Let’s hope next year, we will all be back to early morning starts and the Odeon in Leicester Square for the blockbusters screening at LFF in 2021.

What we miss, of course, is meeting others with a similar passion for film and filmmakers themselves – and then exchanging views with those who want to see more people like us up there too and in the limelight…😉

The Salt in Our Waters – Review