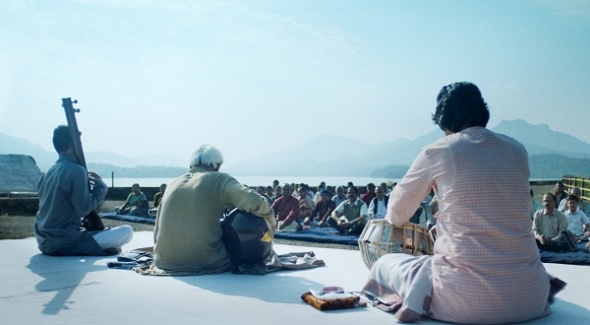 This film is only young writer-director’s second, but is already making waves around the world and was executively produced by Oscar winner, Alfonso Cuarón…

DIRECTOR Chaitanya Tamhane’s second feature is a rich, meditative rumination on the life of an aspiring Indian classical music vocalist.

It puts the ancient and the modern right up against each other through the lead character of ‘Sharad Nerulkar’ (Aditya Modak) and then observes the havoc wreaked by both.

‘The Disciple’ won two prizes at the Venice Film Festival and is currently on the global festival round. It screened only on the BFI London Film Festival (LFF) i-player last night (October 7). Acv interviewed Tamhane when he presented his film at its world premiere in Venice last month.

It is well worth seeing – whether you like Indian classical music and vocals or not.

The beauty of Tamhane’s direction is its strong observational and non-judgmental style. There is a documentary quality to Tamhane’s work and it makes seemingly hard subjects (such as a legal system in his previous film or Indian classical music) very accessible to a lay audience.

It may not have the surprising humour or obvious absurdity of a few scenes in ‘Court’ – his first and much celebrated, much garlanded first feature (which screened at LFF in 2014 and got a UK release in 2016) but just like ‘Court’, Tamhane immerses you in a world that is both alien and relatable.

Nerulkar is dedicated and passionate about his vocation – it certainly isn’t a career, as his family keep reminding him – at least not at the level he finds himself.

The money is poor, there is no real structure or ladder to it and you could wait a lifetime for a real break.

The tradition demands devotion, especially to the Guru who doesn’t just teach you how to sing but how to live.

Nerulkar’s obsession extends to an obscure artist who didn’t perform but had a lot to say about classical Indian vocals and referred to in the film, as ‘Ma’. (The tradition of Indian classical music is at least some 2,000 years old).

The main character’s late father was also a musician and vocalist and a staunch devotee of Ma.

Nerulkar senior first trained his son (Modak) and clearly passed on his love and passion for singing.

There are lovely scenes of the young Sharad learning and his father eschewing playtime for his son to practise more and become ever more proficient.

The film moves back and forward in time and you don’t notice too much because Modak holds it all together very well – the quiet frustrations, the happy moments and the long periods of seeming inertia and lack of progress.

That his father is noted for not reaching a certain level or not fulfilling his potential (a more benign interpretation) is something Tamhane explores deftly and like much else you are prompted to think about this some time after the film has finished.

It is brilliant to see Indian classical music get the big screen treatment it deserves.

Tamhane takes us into this world and out – we can see it from both the inside through Nerulkar’s struggles and from the outside where he has to engage with his family, and wider society.

Slow motion shots of Nerulkar on his bike on the empty streets of Mumbai (pre-Covid) in the depth of night and running the philosophical reflections of ‘Ma’ in his own head at the same time (as a voiceover) are also beautifully constructed.

‘The Disciple’ is a fine film on many levels and you can see why people warm to it and have given it awards.

Gentle, precise and sympathetic, it lets us into a world of which we only really see from the outside – as an audience. At just over two hours, it certainly doesn’t outstay its welcome either.

Behind the music itself, the artists themselves have the same struggles and torments – sometimes more amplified by a devotion to art and tradition.

In some ways, Tamhane asks is it worth it? Is it right for anyone without an outrageous talent to devote themselves to art?

Such subtle films coming out of India are rare and Tamhane has taken them onto the world stage. The backing and support of Cuarón came through a mentorship scheme run by watchmakers Rolex.

The main hope is that a new generation (Tamhane is only 33) is emerging and will continue to make more films of this quality.

Privacy & Cookies: This site uses cookies. By continuing to use this website, you agree to their use.
To find out more, including how to control cookies, see here: Cookie Policy
← Toronto International Film Festival (TIFF) 2022: round-up wrap of films: Awards for two Indian films
‘The Cherry Orchard’ – Reimagined as a family space odyssey (video interview with writer Vinay Patel) & review →