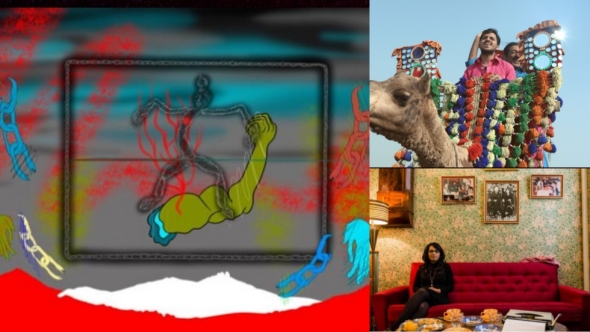 POWERFUL, unsettling and uncomfortable is how you might describe the short film, ‘Stray Dogs Come Out At Night’.

Showing in the Secrets & Lies strand of London Film Festival (October 7-18) shorts, this 11-minute film is set in Karachi in Pakistan and explores the working lives and thoughts of two men on the margins.

It’s best not to know too much about the actual story – it will hit you more, the less you know and the more you work out from the film itself.

Executively produced by London-based psychiatrist Dr Mina Husain, she told www.asianculturevulture.com why she got involved.

“Film is a really effective way to engage and educate people – and to bring topics such as mental health to the fore.”

There is a younger man and his uncle – and the former is a man clearly in a state of some turmoil. He has migrated to the city from his village and works as a Maalishwallah – loosely a masseur, who tends to a horse, which works the beach for pleasure rides.

“He’s feeling isolated, lonely and there’s also a sense of entrapment and desolation,” Dr Husain told us. “He is grappling with a physical illness as well and all these things are contributing to his mental distress. His support network is very limited.”

Part funded by the Pakistan Institute of Living and Learning – a charitable organisation that addresses social issues in the country, she met the director Hamza Bangash while working in Karachi more than two years ago. It’s their second short film together – after ‘Dia’ in 2018.

“He comes from a creative filmmaking background and I am a medic and we shared ideas.”

Based in London now having been raised in Toronto, Manchester (UK) and Islamabad, she’s come into filmmaking to help raise awareness of the signs of mental health issues.

“Stray Dogs is more about common mental health disorders – such as Anxiety and Depression and explores the social determinant of mental health,” she told acv.

Glasgow-based, Birmingham-raised Hardeep Pandhal’s ‘Happy Thuggish Paki’ is a 21-minute film screening in the Experimenta section of the festival.

The film is an eclectic mix of rap, personal and social commentary, traditional documentary footage (when quizzing an animator), cartoons and riffs off video games, and has pornographic references (without any visual content displayed).

In Pandhal’s film there is a voiceover from an original cartoon, based on the video game character ‘Pacman’ and the voiceover narrates ‘paki’s’ predicament – it is both absurd and comical and Pandhal’s title draws attention to a word, which phoentically in the world of video games has no apparent racial connotation.

“It sounds like ‘Paki’ (phonetically) in the cartoon, so I went with that,” Pandhal explained to acv.

“It exposes the lack of care in transmitting the programme to a UK audience.”

The ‘Happy’ bit, he explained is inspired by a book, Catherine Spooner’s, ‘Post-Millennial Gothic: Comedy, Romance and the Rise of Happy Gothic’ and is about the idea of darkness being related to evil and villainy.

He told acv that the film was originally conceived as part of a larger installation around the idea of ‘Thuggee’ in British India. The English word, ‘thug’ is derived from the Hindi, ‘Thuggee’.

Pandhal is considering how ‘Happy Thuggish Paki’ might be extended into a feature-length film.

Dawinder Bansal’s 11-minute short, ‘Jambo Cinema’ appears in This is The Rhythm of My Life section of the shorts.

The Midlands-based immersive theatre producer turned filmmaker takes us on a nostalgic, touching, honest journey to her family’s video store in Wolverhampton in 1980s.

Bansal (pictured above) told acv how she came to make it: “I was working as an immersive theatre producer and was telling other people’s stories, but I wanted to tell my own story.“

The film shows how the store became a focal point for the community in some ways, and enabled dreams. She told us that Bollywood and TV have had an influence on her as a filmmaker.

“It’s influenced my creativity as an artist and I grew up watching quite a lot of TV in general, but Bollywood was such a huge part of my childhood and informative years that it’s had a long lasting impact.”

She is still developing ‘Jambo Cinema’ – having first found artefacts such as old video tape cassettes to tell her family’s story.