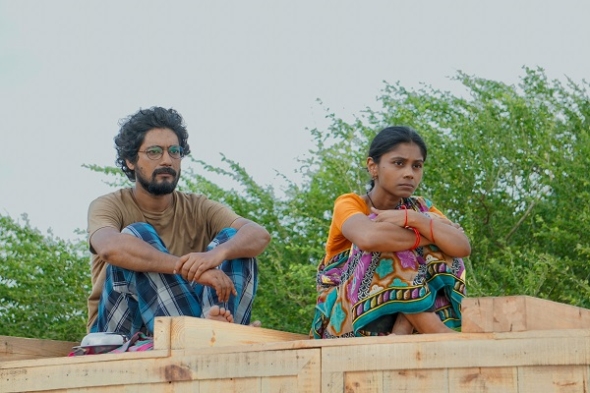 OPENING with desolate scenes of a grey seascape, there’s a melancholic edge to ‘The Salt In Our Waters’ (‘Nonajoler Kabbo’), the debut film by Rezwan Shahriar Sumit – yet despite the bleak backdrop, there’s an abundance of brilliance throughout this fable-inspired tale.

Set in a remote coastal village in Southern Bangladesh (Patuakhali), the film centres on artist ‘Rudro’ (Titas Zia, left in picture above) who swaps his city studio to undertake a project by the sea.

His presence is met by intrigue from the local fishing community, and though he attempts to get acquainted with them, the elders soon turn against him when they discover that his medium is sculpture, likening his statues to idols; the worship of which is forbidden in Islam.

It’s a familiar story of a modern urban dweller clashing with the values of traditional rural folk. Though he finds allies in village girl ‘Tuni’ (Tasnova Tammana, pictured right above), and her younger brother, he becomes the centre of a witch-hunt.

One by one, the residents turn against him, in a campaign spearheaded by the village ‘Chairman’ (Fazlur Rahman Babu, pictured above seated in white) who feeds them folklores that Rudro’s blasphemous art is responsible for their low fishing yields.

The grim outlook for the fishermen who are unable to catch their usual ‘illish mach,’ is heightened by the isolated coastline they reside in, that was once torn apart by a cyclone; evidence of this past destruction is still apparent in the landscape.

The cinematography is exquisite, showing the vastness of the land, masterfully capturing the authenticity of the moment.

It was shot during the monsoon season when the sky, sea, and sands are grey; the same conditions in which the story is set. This results in a striking mise en scene, where the vibrant, colourful saris worn by the women, and the bold printed lungis worn by the village boys light up the frame.

Moments of pure visual joy include when the village children dance through the streets waving handmade flying fish, and a scene where all the villagers line up behind each other, to walk through the rising waters so they can reach safety ahead of an approaching storm; their silhouettes beautifully juxtaposed against green aquatic plant life.

Calmly paced from beginning to end, allowing the viewer to delve inside the close-knit nature of a lesser-represented aspect of Bangladesh, ‘The Salt In Our Waters’ is a thoughtful film that shines a light on the folk that reside in remote fishing villages.

It’s an impressive debut from Sumit who wrote, and directed the film, and co-produced it alongside French producer Ilann Girard.

The movie has been widely supported by international funders including an award from the Spike Lee Fellowship, recognising the flair, and originality that Sumit brings to his storytelling.

The cast too deserves a mention, there’s a likable chemistry between the characters of Rudro and Tuni, but it’s the Chairman who steals the show.

He delivers his sermons with the exact precision and passion that you’d expect to hear from a real-life preacher, and it’s authentic qualities like this that lift ‘The Salt in Our Waters’ from being an ordinary film, into an extraordinary one.
ACV rating: **** (four out of five)