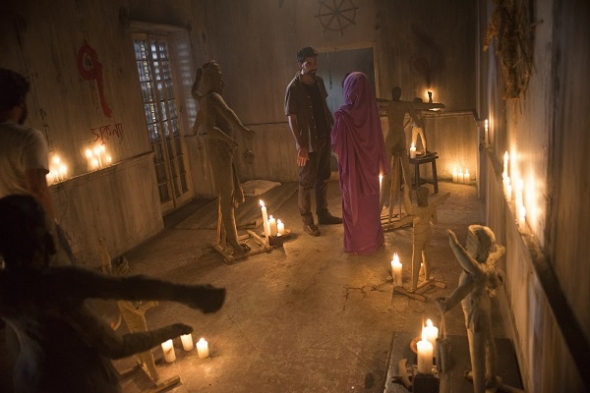 A PERFECTLY-timed Halloween release Brit-flick ‘Darkness Visible’ is a supernatural thriller steeped in the world of occult, and set in the underbelly of Kolkata.

Our protagonist ‘Ronnie’ (Jaz Deol) arrives in the city after his mother goes missing from London and is found there following an accident. While trying to piece together why she’s in India, Ronnie gets caught up in a horror story of his own, where he finds himself linked to a series of murders.

Director Neil Biswas’ fresh take on filmmaking is part of a growing indie horror genre in India. In Adesh Prasad’s ‘Tumbbad’, which acv caught at the International Film Festival and Awards Macao, we were introduced to mythical monster figure ‘Hastar’ while in ‘Darkness Visible’ we’re transported into the world of Indian mythology by spirits and demons.

Drawing you in with its eerie twists, ‘Darkness Visible’ is entertaining viewing. Told in English and Bengali, Kolkata steals the show. It emanates the quirkiness of Batman’s Gotham with its dark lighting, eccentric characters and curious asylum while maintaining the character of a contemporary Indian city.

We see the quaint abodes of middle class families juxtaposed against the uncomfortable world of slum dwellers, set against the familiarity of bustling street markets and the iconic Howrah Bridge: it’s definitely Kolkata, but bleaker.

Though billed as a horror, ‘Darkness Visible’ is less of a scary watch and more a dramatic one. You won’t need a cushion to hide behind, as you’ll be too eager to see how the story unfolds.

Where the film falters is its un-engaging and clichéd opened scenes but if you hang in until the action reaches India you’ll be rewarded. It’s also a missed opportunity that Biswas chose not to show more of the Durga Puja celebrations underway in Kolkata where the film is set.

It would have been more satisfying to make it a larger part of the narrative rather than only catch the odd glimpse and hear about it in detail from Ronnie’s cousin AJ (Neil Bhoopalam), especially as the festival is part of the plot and Biswas filmed in Kolkata while it was on. Also spot Seema Biswas (of ‘Bandit Queen‘ fame) in there…

Overall ‘Darkness Visible’ feels less like a movie and more like the pilot episode of a TV thriller that could easily be adapted into a Netflix series that would accrue an instant cult following. Biswas has certainly touched on something special and it would be a shame to end it with just one project; here’s hoping that’s what he has in mind.

Privacy & Cookies: This site uses cookies. By continuing to use this website, you agree to their use.
To find out more, including how to control cookies, see here: Cookie Policy
← ACV Lockdown Listings: We Are One film festival, LIFF masterclasses, new online South Asian Literary Festival, Desi Lockdown TV and nibs: Johny Pitts wins Jhalak Prize; Raja Chhinal tributes
Cannes 2020: At home…reflections! →