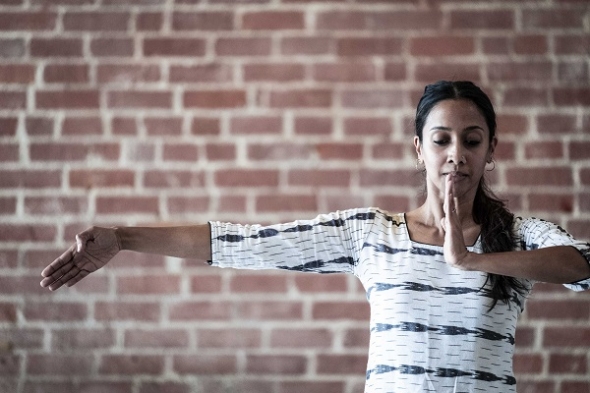 Regarded as one of the finest exponents of bharatanatyam, this artist has the special endorsement of Britain’s very own totemic Akram Khan…

US-BORN Mythili Prakash is one of the leading exponents of bharatanatyam – the Indian classical dance that developed originally in the South of India – and she makes a rare UK appearance at the Dance Umbrella Festival tomorrow (October 18) for a world premiere performance.

The festival itself, one of the best known and most popular dance gatherings in the UK, is marking 40 years this year and commissioned four artists who have performed previously to nominate their own ‘choreographer of the future’ for this year’s festival.

While Khan is from a different tradition – Kathak, he has arguably expanded the repertoire of what it means to be an ‘Indian classical dancer’ – especially in the West.

The piece will be accompanied by Sushma Soma – a vocalist and Sumesh Narayanan on percussion and who co-composed the music with Mythili’s brother, Aditya Prakash.

It will be a world premiere and a very special moment for everyone.

She told www.asianculturevulture.com: “’Here and Now’ is about my relationship with time as a mother and as an artist – navigating the human struggle to be in the present.”

It’s a philosophical piece that looks at what it is to be human and experience time.

“The starting point of the piece was one of my favourite childhood stories, ‘Narada and the story of Maya’, which is a simple illustration of a profound philosophy that questions our perception of ‘Reality’,” she revealed in an email exchange.

She explained further: “For me this questioning of ‘Reality’ is so linked to our experience of time, which is so ambiguous and yet seems so certain.

“We live our life on the certainty that the sun will rise every morning, and yet our mind is the epitome of uncertainty, swinging constantly between past and future.

She is keen for ‘Here and Now’ to connect on a very human level – it is easy to get caught up in tradition and convention – but her quest has been to find something connecting us all through the medium of her practice.

“Without compromising authenticity or integrity of the form, or,” she emphasised, “on the contrary – feeling pressured to adhere to conventional structures that don’t serve the concept of the piece, I want the incredible language of my classical form to be incidental, and for the human experience to be central.”

She has been recently performing Khan’s newest work, ‘Outwitting the Devil’. It is currently on a world tour and has yet to be seen in Britain.

Prakash regards Khan as one of her most important mentors.

“He has opened my eyes to a whole new world and way of thinking that stretches boundaries of the classical. He has mentored my through the process of creating this new piece.”

Her other mentors during her dance career, have been Malavika Sarrukai one of the most celebrated bharatanatyam dancers of the modern era. Prakash spent time in India after her graduation learning about dance from her.

She “really deepened my journey. In my years of training with her, there is increased mindfulness in the practice of the form an in choreography and it’s a journey of constant discovery,” revealed Prakash.

Being marked out of a ‘choreographer of the future’ by one of the great dancers of our times means that Khan sees Prakash as gifted and someone who can take Indian classical dance to new places and old.

And someone whose western upbringing and critical practice (in the West) can push the form and engage new audiences.

“I do feel I have responsibility to current and future generations,” she told acv. “The desire is simply to dance and create work!” she said in response to a question about participating in Dance Umbrella. She feels that social media is playing a part in standards being lowered.

“I am deeply concerned about the state and quality of dance due to social media.

“Many things that I find terribly mediocre are eulogized. And the louder you are, the more attention (and likes) you attract.”

She said that in such an environment – the discipline and dedication required to excel become that less demanding.

“The rigor and focus needed for the art to grow are nearly impossible to generate and maintain. I am worried for the future generations who are impressed by big talk but fail to see the inconsistency in the output.”

Prakash grew up in a very musical family – her mother danced – even while pregnant with her and both her parents helped to create a school of bharatanatyam in Los Angeles.

“Dance was my first language and my first love,” she said.

She started performing when she was just nine years old but maintained her studies and has a degree in mass communications from the University of California Berkeley and it was there, that she first began to feel the pull of a professional calling as a dancer.

Her parents persuaded her to take time away and pursue dance wholeheartedly.

“They knew me better than I knew myself; they knew I would not be happy pursuing anything but dance.”

She went off to India and immersed herself in the practice and emerged on her return, more or less convinced she had found her calling.

“I started a master’s degree in Fine Arts at UCLA, but my performance schedule was too busy to commit to an academic life.”

Privacy & Cookies: This site uses cookies. By continuing to use this website, you agree to their use.
To find out more, including how to control cookies, see here: Cookie Policy
← ‘Innocent’ – Priyanga Burford: “Drama world is catching up with real world”, as she talks representation, love rivalry and outsider status in new ITV drama
Jhumpa Lahiri – My Indian heritage informs everything, she says as latest book is an English translation of her own work first published in Italian… →