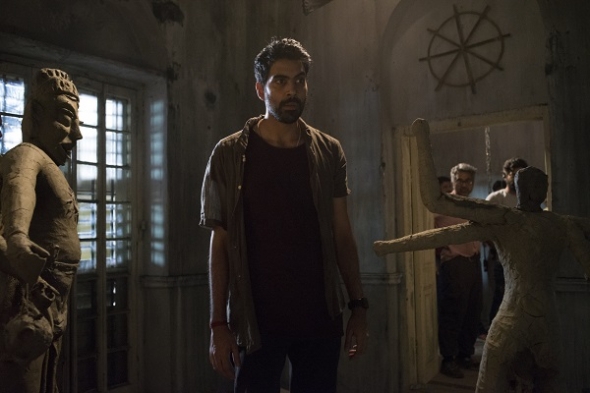 ESTABLISHED writer Neil Biswas is just about to release his first directorial feature – ‘Darkness Visible’ – a horror thriller set mostly in Kolkata.
Starring Jaz Deol (‘Eastenders ’, ‘Viceroy’s House ’, ‘Assassin’s Creed’), it tells the story of 28-year-old Ronnie who is a London-based graffiti and video artist for his girlfriend’s rock band.
Shortly after celebrating his birthday with Lena (Salóme Gunnarsdóttir), he paints a huge graffiti mural and shows a picture of it to his mother, Suleka (Aventika Akerkar) – who left Kolkata on her own, in strange circumstances when Ronnie was just a baby.
When Ronnie and Lena go to his mother’s home later for a celebration cake, they discover she has left suddenly for Kolkata and has been involved in a serious accident there. And so Ronnie’s dark journey begins in earnest…
It’s exciting to have a new British Asian film director on the scene – and while the film goes on release tomorrow (October 18) other screenings can take place, if there is enough interest – so don’t hesitate, go! Book tickets – see below…

Biswas tells us more about his first feature film, having directed and written for TV…

www.asianculturevulture.com (ACV): How did you come upon the story? Were you exploring your own sense of identity?

Neil Biswas(NB): In truth I’ve always wanted to make a film about Kolkata and my relationship to it.
My parents have been taking me there since I was a little kid, and I’ve always felt this huge attachment to the people and the culture there – but yet at the same time – I’ve always felt apart from it by being British. And I guess I wanted to find a way – a story – that captured this strange conflicted relationship.

ACV: The story is very much based around the occult and the supernatural, what drew you to this subject?

NB: My uncles in Kolkata used to tell me scary stories about ghosts that they saw in the first house they lived in when they came to Kolkata.
I think my mum’s family were very attuned to the occult because – like Suleka in the story – they lost both their parents in one day. And like Suleka – a couple of them started attending seances (making contact with the deceased through a medium). So, a lot of the story in ‘Darkness Visible’ comes from their stories – and the worlds they created in my mind. I think they truly believed that there was another world of spirits wandering around night-time Kolkata – and I guess I did too.

ACV: How difficult or easy was it filming in a city like Kolkata?

NB: Drink a lot of water! It is very hard to film in Kolkata, and yet it’s also incredibly exciting. Anything can actually happen – especially if you are filming on the streets with real people as we were. I still marvel over some of the stuff we captured in the film – because it was so real. My crew were a mixture of an older, very experienced Kolkata filmmakers and a bunch of very young, film-savy Mumbai kids – and it was perfect for what was needed. My director of photograpy (DOP) – Robert Baumgartner came from America – and he was very experienced too – but it was a completely new, magical experience for him too. In short, making films is so important to people in India – that really they will do anything to make it work for you.

ACV: How did you raise funds to make the film itself?

NB: The BFI have been developing this project with me for a number of years – and I have to say – that they have persevered to make it happen. I had to do a lot of drafts. But it was worth it. There is no way a film like this could be made without BFI backing – both financial and creative. My producers Jason Newmark and Laurie Cook secured additional funding from the UK, and my American agent UTA helped package the last part of the money. We reached out to Sikhya Entertainment (an Indian production house headed by Guneet Monga, well-known internationally for the number of independent Indian films she has brought to the screen), when we made a teaser for this film about three years ago – and that was when I first worked with Shaan Vyaas (of Sikhya). After making the teaser – and seeing how Sikhya worked – I knew that Shaan and Guneet Monga were the perfect partners in India for the film.

ACV: It’s an intense and absorbing film and both Jaz Deol and Indian actor Sayani (pronounced Shayoni) Gupta do their roles justice – what was the casting process like?

NB: Jaz and Sayani were both tremendous collaborators. Jaz was in every scene in the film – which is an incredibly difficult task for an actor to achieve, especially in the conditions we were filming. Sayani is very unusual in Bollywood – in being an actress who is willing to dare – an actress who is not scared to go to places that are scary and challenging for her. Jaz, similarly, comes from a very method background – and is meticulous in finding the right way to get to those extreme emotions and psychological truths.

Biswas was the co-creator of ‘Stan Lee’s Lucky Man’ on Sky and led the writing team in the first series – which was the channel’s highest rated original drama ever. He is also well-known as the writer-director of ‘Bradford Riots’ (2006) and was lead director on Series 4 for Channel 4’s popular teen series, ‘Skins’.

Privacy & Cookies: This site uses cookies. By continuing to use this website, you agree to their use.
To find out more, including how to control cookies, see here: Cookie Policy
← Dilip Kumar – Nation mourns screen legend who was among earliest of Bollywood’s megastars…(Obituary)
Manchester International Festival 2021: Imtiaz Dharker on ‘Poet Slash Artist’ and her new artwork/poem ‘My Breath’ (video) →