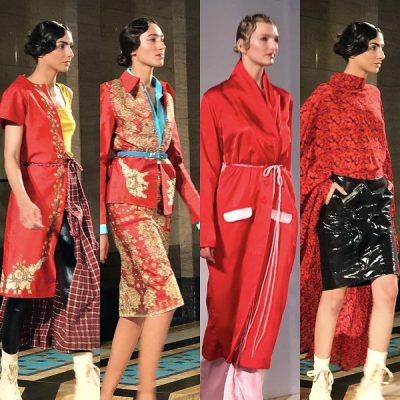 THE THING with London Fashion Week (LFW) is that the promise of high-glamour, super models and catwalk trends no longer cut it in the appeal stakes.

The attention has moved from being about a designer’s new collections and the celebrities who sit in the front row, to the controversies that surround it; and this year was a case in point.

On the first official day of LFW Grenfell campaigners took to the catwalk to highlight the fact that the West London fires resulted in 72 dead, yet no arrests have been made. On the same day body positivity activists drew attention to fact LFW was not representing realistic body sizes on the catwalk.

On day three over 150 campaigners from Extinction Rebellion, an environment group who believe LFW should be more sustainable, caused a major road blockage in protest against the fast fashion industry which they say contributes to climate change.

Disruption was caused to major shows like Victoria Beckham’s with the intention of getting the British Fashion Council to make climate concerns a part of Fashion Week. While this is a topic of much debate, one area where LFW has been praised is that after 34 years the event is fur-free.

Keeping with the topic of controversies, Creative Director of Burberry Riccardo Tisci found himself embroiled in a debate about sensitivity in design. The brand’s models strutting down the catwalk wearing hooded tops with a noose around their neck, which though he described as a ‘nautical theme’, was interpreted by others as glamourising suicide. The tops in question were removed from the collection soon afterwards. Coming just weeks after Gucci faced a backlash against its ‘blackface’ jumper, the big brands could do with some serious guidance on what’s appropriate and what’s not in the world of design.

No brand is perhaps more controversial however than the one-man brand of Karl Lagerfeld who was guaranteed his place in the fashion history books by dying during fashion week.

Though his biggest accolade will be presiding over powerhouse brand Chanel, he acquired a reputation as an individual in his own right, though not always for positive reasons. He was unpopular for not believing the #MeToo movement, and was accused of sexism, Islamaphobia and fatphobia.

Will the fashion world miss him? Absolutely. Even with these flaws, he will remembered as a one-of-kind character who was a major player in the fashion world for decades and without him being there to cause controversy, it could be argued that fashion politics may become more a tad more dull.

Apart from one designer creating a dress with India emblazoned on it in large letters, the collection was a fresh, colourful, contemporary selection of garments that didn’t overtly come across as South Asian – for a start there wasn’t a sari in sight. Block colours and handicraft techniques were employed to create pieces that used heritage craft techniques, but maintained a Western aesthetic.

As for the more established Indian designers, Ashish put on one of the most anticipated show of fashion week which consisted of a pitch black catwalk with just one spotlight that shone down on striking sequinned garments. His collection also featured classic crochet clothing that resembled ‘granny square’ blankets cut up and shaped into clothing, but he showed no originality there.

Crochet squares are a centuries old craft technique and there so there was nothing creative about the concept which has been done before.

Delhi designer Rocky Star made his 6th appearance at LFW with a collection inspired by the architecture of the Vatican. And his Indo-Western concepts didn’t end there: his showstopper was British Bollywood icon Amy Jackson.

In keeping with the positive news, children’s brand Panda London were praised for their diverse approach to their choice of catwalk models including 11-year-old Katie Renshaw who has cerebral palsy and was assisted on the ramp by a stroller and eight-year-old double amputee Daisy Demetre who performed a cartwheel while wearing two prosthetic limbs.

Meanwhile plus size brand 11 Honoré cast models in a range of body sizes, though being a brand aimed at larger sizes, this is to be expected. A number of brands also showed their commitment to age diversity. This included models such as 62-year-old Patti Hansen appearing in the Michael Kors show and Pat Cleveland (68) appearing for Hellessy.

Major Fashion Weeks wherever they are held have long been contentious when it comes to inclusivity and diversity, but the 2019 Autumn and Winter week highlighted that consumers and industry members are increasingly not accepting this standardised notion of fashion any more.

So, while change may be slow, it’s on the agenda and it will be interesting to observe over the coming seasons how the boundaries of fashion are pushed even further.