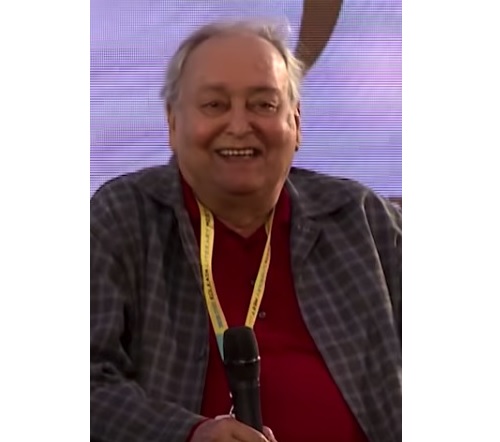 In this personal piece, writer-director and cultural polymath herself, Sangeeta Datta, mourns the loss of one of the most revered figures of modern Bengali culture…

ON SUNDAY 15 November, an actor died in the city of Kolkata.

An astounding 10,000 people walked with his cortege on his last journey to the crematorium on the same evening.

The crowd walked with lit candles and large posters of the artist, solemnly singing Tagore songs and showing great restraint.

Bengal’s chief minister Mamata Banerjee walked with the crowds. So did leaders of the opposition CPM (Communist Party Marxist) party who otherwise would not be seen sharing space with ruling party leaders.

People from all walks of life, the young and old, middle class housewives, parents and children, stepped out on the streets to bid goodbye to this iconic artist of Kolkata, who had been part of the fabric of the city for the last six decades.

This is the city of Kolkata which sets everything aside when paying tribute to arts and culture, and it was the city which Soumitra Chatterjee made his home and workplace from the 1950s, when he was cast by Satyajit Ray, in the role of Apu, in the third part of the Apu trilogy, called ‘Apur Sansar’ (1959).

A post-grad in Bengali from Calcutta University, Soumitra was already doing theatre, debates, editing a magazine, ruling over the famed Coffee House adda (chat) sessions with his charismatic presence.

At 23, he became an international star, as ‘Apur Sansar’ travelled through the West, winning awards and much critical praise.

The romance of the young married couple Apu and Aparna (Sharmila Tagore), became part of the Bengali collective consciousness.

He became a regular in Ray’s stable, doing an astonishing 14 films with the maestro, learning his discipline and attention to detail.

Chatterjee recounts how Ray would take him to Film Society screenings of European films every Sunday morning, to show him real acting, to scale down his stage pitch, as he was already doing a lot of theatre.

He was to the cinema of Ray what Toshiro Mifune was to Akiro Kurosawa, or Robert De Nero is to Martin Scorsese.

Ray offered him varied roles, Apu in ‘Apur Sansar’, the light hearted Amal in ‘Charulata’ (1964) , the young man who stands up against superstition in ‘Debi’ (1960), the very urban Ashim, who questions his narrow values after visiting the forest in ‘Days and Nights in the Forest’ (1969).

Each of these films were received very well in the West and in India with the Bengali audiences.

Mary Seton wrote of Soumitra “his chief asset was the natural sensitivity of his appearance”.

Soumitra’s popularity jumped after Ray cast him as Feluda – the popular detective in his children’s fiction.

Both ‘Shonar Kella’ (1974) and ‘Jai Baba Felunath’ (1978) were amazingly popular and every child of the 1980s loved Soumitra as the intelligent, cool, sleuth cousin brother.

As the intelligent actor, we loved his Feluda dialogue, “I have another weapon, it’s the magajastra (brain weapon), it stays in here”, he says tapping his temples.

Two favourites for me are his taxi driver in ‘Abhijaan’ (with Waheeda Rehman) and the mentally ill son in ‘Shakha Proshakha’ (1990).

Soumitra Chatterjee had also worked with the other Bengal greats, Mrinal Sen in ‘Akash Kusum’ (1965), with Tapan Sinha in the Tagore adaptation ‘Kshudita Pashaan’ (1960), ‘Jhinder Bandi’ (1961), with Tarun Majumdar in ‘Ganadebata’ (1978).

He was a popular hero in mainstream romances like ‘Teen Bhubaner Parey’ (1969), where his jiving on the streets became a statement of 1960s youth, and ‘Shaat Pakey Bandha’ (1963) with the legendary Suchitra Sen.

He would get under the skin of every character and not allow his star status to mark him, unlike the other bigger Bengal star Uttam Kumar, who was getting trapped in mannerisms.

Chatterjee also played the father of a schizophrenic child in Aparna Sen’s ‘15 Park Avenue’ (2006) and an ageing father of a film star in Rituparno Ghosh’s ‘Ashukh’ (1999).

At the Tollygunge Studios, I would be running in for a shoot and from across the wall a familiar voice would call out my name.

Soumitrada shooting for another production, would insist on a quick cup of tea and a catch up, before I ran to our set.

He has always been approachable to younger filmmakers and worked with the best contemporary filmmakers.

Scriptwriters were writing roles with him in mind and he played characters his age, exploring loneliness (‘Belasheshey’) , exploring dementia in ‘Mayurakshi’ (2017), old age friendships in Anik Dutta’s ‘Barunbabur Bondhu’ (2019).

Bengali audiences would throng to the theatres to see a new Chatterjee release and he left with ten unreleased films.

But for me, Soumitra as film actor is only one aspect of his career.

He was equally and passionately involved in Bengali theatre, returning to the stage in 1978 with ‘Naam Jiban’ and his last role as ‘King Lear’ (directed by Suman Mukherjee) just a few years ago – and to which he personally invited me – will remain indelible in my mind.

Soumitra was a playwright, stage director, poet, painter,and long time co-editor of the little magazine Ekkhon; he was also an actor activist, who walked the streets of Kolkata for socio-political causes.

Even in late September he wrote in the Left party magazine Ganashakti, critiquing right wing identity politics, stating “we have known Ram all our lives and what he stands for, so what is this new education?” also attacking the cow vigilantes asking: “How can anyone be persecuted for what he eats?”

It is his left leaning politics that kept him close to common people, intellectually alive, approachable and well loved.

I have known him since my university days and he has always engaged so comfortably with younger people, his childish enthusiasm and wicked sense of humour livened up every adda session.

Soumitra was my first choice for my own feature film, the Lear adaptation in ‘Life Goes On’ (2010).

We had invigorating discussions on the script with his knowledge of Shakespeare and his phenomenal memory.

He hds to step out reluctantly after being diagnosed with cancer. He had promised we would work together again and when I made the docu-drama on Rituparno Ghosh, ‘Bird Of Dusk’ (2018) – he came to my home for a long interview despite being unwell.

He also went to the studios to read extracts from Ritu’s ‘First Person’, which form the spine of the film.

He was fastidious and a perfectionist, so even the slightest muffle would warrant a re-recording.

The evenings dissolved into adda sessions on Ray, on the industry, on politics and sports and of course readings from his own poetry.

Always the first person in and the last person out, lately his health did not permit him to work beyond four hours.

Even at 85, he was working regularly and in fact was taken to hospital straight from the studios.

He excelled as a spoken word artist, making readings a fine art, his enunciation reminding me of the beauty of the Bengali language.

His readings of Tagore were a treat to hear and people thronged to ticketed events to hear him.

Soumitra da has been part of concerts produced by my arts company Baithak and has read with us in Hampstead Town Hall in London and at Birmingham.

He also read for my music albums. When I wrote and directed the musical ‘Gitanjali 100’, Soumitra da joined us for the Calcutta edition.

The event at the Calcutta Club was electric, with Soumitra and Sharmila reading, and 4,000 people spilling from the lawns onto the tennis gardens.

His deep commitment to poetry and literature, his aesthetics, his positive approach to life, his incurable romanticism, are precious inspiration for younger filmmakers and cultural producers.

Following the screening of Catherine Berge’s documentary film, ‘Gaach’. Soumitra did an onstage interview at the British Film Institute (BFI).

I was privileged to do thrilling interviews with him at the Nehru Centre, London as well as at Sampad, MAC in Birmingham.

France bestowed the coveted Legion of Honour in 2017, and Shabana Azmi has remarked how nonchalant he was as he received the award in Paris.

This year I had planned to do a long interview with him on Ray (to mark the latter’s centenary year) in December. Covid and death changed all of that.

Actor, poet, painter, spoken word artist, Soumitra’s passing was not of an individual, it was saying farewell to an era, a way of life, a six decade cultural history.

This isn’t time to grieve but to support a full life, a consummate artist, a Renaissance man, representing the best of Bengali identity, a legacy that calls for celebration and projection into the future.

I would like to remember him with his strident walk, his hearty laughter, his childlike curiosity and his dignified fight with life. An epic Colossus who was also Everyman.

You can find Sangeeta Datta at Baithak UK