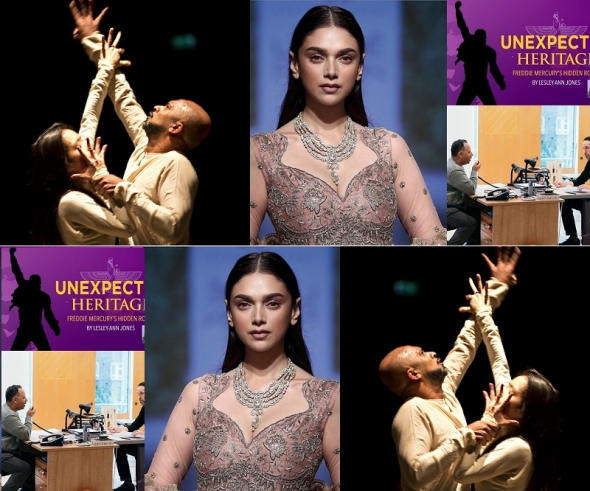 What’s coming up – tickets available to all…

THERE’S a rare chance to catch Kathak dance supremo Akram Khan on the stage, as he reprises his role in a new production of ‘Until the Lions’.
It first premiered at the Roundhouse in 2016 and returns there for a six-night run from Friday (January 11).
Adapted from a section of the award-winning poet and writer French-Indian writer Karthika Nair’s ‘Until the Lions: Echoes from the Mahabharata’, it makes full use of the 360° stage at the venue.
Khan has choreographed a tale which centres on one of the unsung heroes from the Hindu epic, ‘Mahabharata’ and one which fascinated Nair enough to devote one chapter of her book to ‘Amba’, the princess who is abandoned on her wedding day and seeks revenge from the gods.
Many of the original talents who helped to create ‘Until the Lions’ have returned for this production. Among them is Tim Yip, who is an art director and works in costume. He won an Oscar for ‘Crouching Tiger Hidden Dragon’.
Khan has been winding down his full-length work stage appearances after presenting ‘Xenos’ as a final piece to his solo career. He last spoke to us about this and his curation of the dance section of the Darbar Festival at Sadler’s Wells in November last year. Interview (January 10) with Karthika Nair here

FASHIONISTAS looking for a bit of Priyanka Chopra-Nick Jonas, Deepika Padukone-Ranveer Singh and Sonam Kapoor-Anand Ahuja magic, should head to the Dorchester on Sunday (January 13).
The hotel courtesy of UK- London HQ fashion house Aashni open the doors to the public for a South Asian fashion, bridal and beauty showcase.
Among the designers will be some of India’s best-known names including Manish Malhotra (who helped to design a December pre-wedding celebration outfit for the billionaire daughter of Mukesh Ambani – Isha – and Anita Dongre, who designed the dress Sophie Turner, Game of Thrones actor wore to Chopra-Jonas’ wedding in India in December.
There will also be a series of masterclasses with couturier Sabyasaachi, celebrity make-up artist Shaan Mu, influencer Diipa Khosla and The Wedding Design company’s Vandana Mohan. And there also are set to be discussions about wedding fashion too with Shraddha, FashionForRoyals and Kavita Cola. The other designers showcasing outfits will be Gaurav Gupta, Shyamal & Bhumika, Abhinav Mishra, Amit Aggarwal, Anjul Bhandari, Astha Narang, Gaurang, Jayanti Reddy and Mrunalini Rao.
Listing
Doors open at 11am-6pm. The Dorchester, 53 Park Lane, Mayfair, London W1K 1QA. Tickets/Info: http://www.wslondon.com/

FREDDIE Mercury is enjoying something of revival and there is renewed interest in his Parsi (Zoroastrian) background following the continued success of his biopic, ‘Bohemian Rhapsody’ and actor Rami Malek’s win at the Golden Globes and a Bafta nomination earlier this morning.
Homing in on the interest and looking more closely at his background is author Lesley-Ann Jones.
She presents ‘Unexpected Heritage: Freddie Mercury’s Hidden Roots’ at Asia House, the arts, learning and business institute that focuses on the continent.
A friend of Mercury’s, she will assert that the flamboyant star remained proud of his heritage and had a connection with the island of Zanzibar (now part of Tanzania), where he was born. His parents moved from India to Zanzibar and settled in west London with Mercury’s sister, Kashmira Cooke in West London in 1964.
Jones, the author of ‘Bohemian Rhapsody: The Definitive Biography of Freddie Mercury’, will share anecdotes and her own personal experiences of dealing with one of biggest stars the globe has ever seen.
Listing
‘Unexpected Heritage: Freddie Mercury’s ‘Hidden Roots’ 6.45pm-8.30pm Asia House, 63 New Cavendish Street, London W1G 7LP
Tickets/Info: https://www.eventbrite.co.uk/e/unexpected-heritage-freddie-mercurys-hidden-roots-tickets-52662725630

STARTING this evening (January 9) is Ishy Din’s play, ‘Approaching Empty’. The ex-cabbie has drawn on some of his own experience to produce a drama about two men who are both rivals and friends. Mansha is ready to take over Raf’s cab business but not is all it seems in the mid-1990s in the north of England. Set in the aftermath of former Prime Minister Margaret Thatcher’s, death it promises to be a great experience. Din is an award-winning playwright and his ‘Snookered’ delved deep and unflinchingly into minds of young Asian men who happened to be from Muslim backgrounds and provided real insight and humour. Din told us that he likes to create the familiar within the unfamiliar and that his work is relatable across the board.
Read our interview with him soon – follow on Twitter or Facebook and do not miss it.