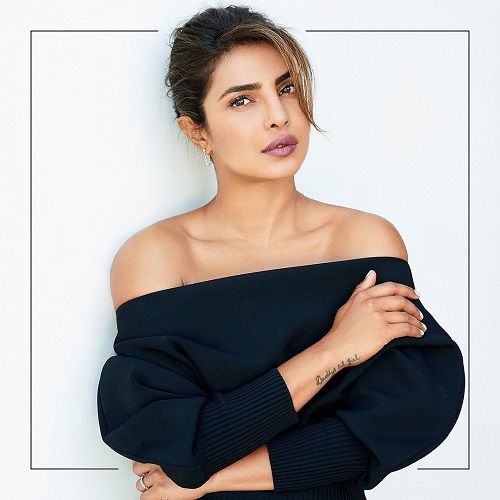 ICON Priyanka Chopra Jonas is the British Fashion Council’s new Ambassador for Positive Change and says she is going to be in London over the next year.

She posted a story with pictures from London yesterday and told her 58 million plus followers on Instagram: “I am honoured to be the British Fashion Council’s Ambassador for Positive Change while I am living and working in London over the next year. We’ll have some really exciting initiatives to share soon, and I look forward to bringing you on this journey with me”.

In a press release issued from the British Fashion Council, she added: “Fashion has always been the pulse of pop culture, and can be a powerful force with the ability to connect cultures and bring people together.

“Through my role, I look forward to celebrating the incredible diversity and creativity of the industry, while working to champion budding and iconic designers doing their part to make an indelible impact on people and our planet.”

The film star will
* have an active role in British Fashion Council (BFC) events, throughout the coming year including London Fashion Week and The Fashion Awards
* support the BFC in its efforts to raise awareness and promote best practice
* help to celebrate those that adhere to inclusive and ethical principles in the fashion industry and act as a spokesperson for the importance of creative education

The move is part of the BFC’s vision and strategy around its Institute of Positive Fashion (IPF), set up to promote concepts of creativity and responsibilty.

The idea is to make the British fashion industry a lead voice in what it describes as “a more resilient, circular, equal and fair” system through “global collaboration and local action”.

Caroline Rush CBE, chief executive of the BFC was delighted to be bringing Chopra Jonas on board as the BFC’s very first Ambassador for Positive Change.

She said: “Her work as a social activist, promoting causes such as the environment and women’s rights, and her commitment to using her reach for good are what have made her one of the industry’s most courageous voices and the perfect choice as the BFC Ambassador for Positive Change.

“We look forward to working with Priyanka over the next twelve months, for her to share her voice and knowledge on causes she cares about, helping us with the important goal towards creating an industry that is more diverse, equal and fair!”

The BFC confirmed that the Bollywood star, who has appeared in over 60 films, is the first such Ambassador.

At the cutting edge of the industry, the IPF aims to reset the fashion industry globally by identifying common challenges, encouraging collective action and investment.

“The IPF aims to bring the industry in tune with the needs of the planet by taking a holistic approach across people, community & craftsmanship,” stated the BFC in a press release.

Chopra Jonas has a number of commitments and projects on the go currently.

Two big films of hers are about to release on Netflix – ‘The White Tiger’ and the kids’ family film, ‘We Can Be Heroes’.

Her memoir, ‘Unfinished’ will be released on January 19.

She is also signed to do ‘Citadel’ a new Amazon Studios international spy series, in which the star will appear alongside Richard Madden (‘Bodyguard’) and Danish actor Roland Møller. There are also local versions of the TV series being made for India, Mexico and Italy.

It was recently announced that Chopra Jonas would star in the romance ‘Text for you’ pairing up with ‘Outlander’ star Sam Heughan, and Celine Dion. The film is about a bereaved widow/widower who connect through texts. The story is adapted from a novel by Sophie Cramer in German and was turned into a film, ‘SMS Fur Dich’.

In addition to these, Chopra Jonas also has a production deal with Amazon as a producer and will star in ‘Sheela’ about controversial godman Shree Rajneesh’s (Osho) right-hand woman, Sheela Anand. Rajneesh fled India and set up a community in the US in the 1980s, before returning to India and dying in 1990.

Chopra Jonas also posted pictures of her celebrating Diwali in London with her husband, US pop star and TV personality, Nick Jonas. The couple have been married two years.

Privacy & Cookies: This site uses cookies. By continuing to use this website, you agree to their use.
To find out more, including how to control cookies, see here: Cookie Policy
← Humble The Poet – from down and out to social media global spoken word star… (Bagri Foundation Asia House Festival of Literature closing event)
Sanya Malhotra (video) – on ‘Dangal’, ‘Photograph’ and breaking through into Bollywood (update) →