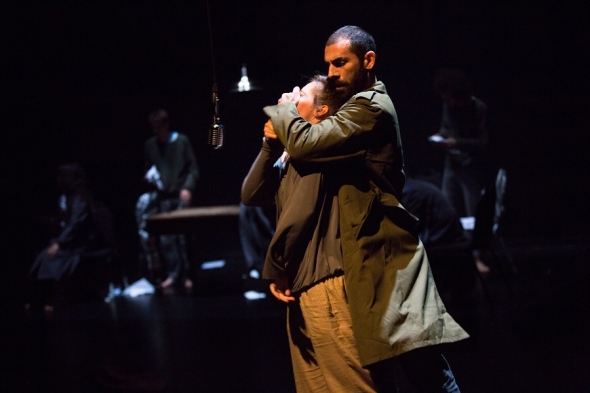 HE IS ONE OF THE LEADING dancers of our times and is about to premiere his first full-length choreographed piece in the UK.

There’s quite the story behind Aakash Odedra’s ‘#JeSuis’.

It was initially trailed in a shorter format at the Edinburgh Fringe last year and his dance company has just performed the world premiere of the full length ‘#JeSuis’ at the Arts Centre of New York University in Abu Dhabi.

Tomorrow (February 15) the 70-minute or so piece hits the Patrick Centre in Birmingham and while shorter and ‘work in progress’ performances have been held in a few places, it’s the first time a UK audience will see the final fully-formed production, which has already garnered wide acclaim – and an award.

In Edinburgh, it won the Amnesty International Freedom of Expression of Award.

Odedra took time out to talk to www.asianculturevulture.com about ‘#JeSuis’ – recounting its unlikely origins, the involvement of seven dancers all from Turkey and how he was met with scepticism and doubt but has triumphed to get ‘#JeSuis’ to the stage.

The work is both a meditation and a response to the increasingly fractured and hostile environment in which we all can find ourselves.

Born out of the refugee crisis in the Middle East, and Turkey, especially, the piece looks also at how the media interprets – and can distort – events and how human relations(hips) are adversely affected.

A soloist with a fine pedigree, and training in both Kathak and Bharatanatyam, Odedra is an accomplished performer and has a global following.

He had gone to Istanbul to conduct dance workshops as part of a performance of ‘Rising’ – a four-piece set choreographed by dance giants Akram Khan, Russell Maliphant and Sidi Larbi Cherkaoui and Aakash himself, respectively.

It was while conducting workshops as organised by the British Council (which supports British artists taking their work beyond these shores), he was struck by the enthusiasm and passion of the dancers.

“That’s when I started working with some of the dancers who are in the piece now,” Odedra revealed to www.asianculturevulture.com. “I was originally allocated two hours a day and the dancers gave me 15, of their own time, it was the passion and hunger they displayed. So, for me that was starting of the inquiry – who are these people and why are they so different?”

That was in 2012, and he went back to Istanbul of his own accord and was struck by the atmosphere.

“There’s this incredible mix of people and one time I was just walking around and saw this protest with drums, and an ocean of people coming forward, I couldn’t understand what it was about – I was quite taken aback,” he recounted.

Turkey itself was going through a period of profound strife and change – there were refugees from the Syrian crisis spilling over into its territory; extremist cells were recruiting and facilitating movement into Syria and Iraq supporting Daesh (so called ‘Islamic State’); the country was hit by several terror attacks; there was an aborted coup, and the state under President Recep Tayyip Erdoğan was increasingly clamping down on dissent and opposition, and was involved in major offensives against both Daesh and Kurdish rebels.

This uncertain environment had an impact on Odedra and clearly the dancers were living it daily.

“What I can say about all of them (the dancers) is that they have great souls – a massive amount – you just can’t buy that. That has to come from your life and your life experience,” explained Odedra.

He was determined to work with them, but the portents were not good – on a fundraising drive he was met with negativity and disapproval.

“I faced a lot of opposition when I made this piece. Many promoters turned around to me and said this sounds great but sorry we are not going to support you in this, because the dancers are from Turkey, you are going to have a lot of problems getting visas for all seven dancers. They said this to my face.

“They said it was too ambitious, but where there is a will there is a way,” Odedra declared.

He got the opportunity of visiting refugee camps in Greece and saw first hand the difficulties people were experiencing, and it left a profound shadow over him.

“We are all displaced,” he stated. “We are facing an internal displacement now.

“These are people (in Turkey) who are surrounded by people who have been displaced.

“Generations here are still crying – about feeling odd and wondering whether we belong or don’t (in Britain).

“You watch news bulletins and read reports in the media, but there is a lot of manipulation and the reality when you go there is completely different. We want to question that.”

It is a deeply personal piece but one also inspired by the experiences of his Turkish colleagues.

“It’s a magnification but it also becomes a reflection of what is happening in rest of the world.

“There is a risk in doing something like this – but if you don’t take risks and pursue (things you want to), you might as well go and live in Switzerland!”

No disrespect to Switzerland, but Odedra clearly wants a reaction to ‘#JeSuis’ – mind, body and soul.

https://www.birminghamhippodrome.com/calendar/jesuis/
Read our review of #JeSuis after its UK premiere here on http://www.asianculturevulture.com and know when it is out by following on FACEBOOK or TWITTER, if you are not already…

Privacy & Cookies: This site uses cookies. By continuing to use this website, you agree to their use.
To find out more, including how to control cookies, see here: Cookie Policy
← ‘Beyond Skin’ Nitin Sawhney’s 20th anniversary concert at the Royal Albert Hall (review) – A brilliant journey of nostalgia and hope…
Win tickets to see Baahubali at the Royal Albert Hall with Prabhas, Anushka Shetty and Rana Daggabuti and SS Rajamouli and MM Keeravaani! Baahubali competition (winners announced) →