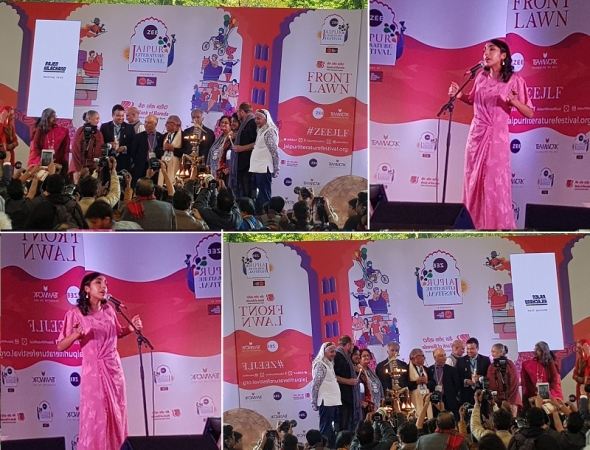 THREE years ago a young woman by the name of Rupi Kaur stood at the back of the front lawn of the Jaipur Literature Festival and marvelled at the wisdom and talent of the incomparable Magaret Atwood.

Now Kaur herself is commanding the main stage and in her first ever public performance in India, endeared herself to an audience of the devoted, the curious and even those who had no idea of her literary stardom – her first work ‘Milk and Honey’ was a New York times bestseller and has sold over a million copies.

There has been criticism recently of poets such as Kaur (and Hollie Nish) whom award-wining British poet Rebecca Watts, as reported in the Guardian, and first dismissed in PN Review, as “consumer-driven poets” whose rise through social media has led to a general dumbing down of the form and a lack of intellectual rigour.

But even if that is the case, poets such as Kaur are hugely popular and command attention and respect.

Many of the JLF audience were under 35, and probably around her own age of 25 with the female-male split about 80/20.

She delivered what was perhaps the defining performance of the day – she called it a ‘show’ and it was – she had the audience eating out her dainty and skilled hands with a poetry slam that surely is one of the biggest of its kind anywhere.

Well-established in North America, she has a following in Britain, but rather like her Youtube contemporary Lilly Singh (aka Superwoman on YT) – among a particular contingent and the wider UK mass media remain mostly oblivious to her considerable charm, gutsiness and talent.

How many other poets (and she is one, though not of a conventional mould for sure) could describe the act of migration as a work of art and carry it off with not just aplomb, but emotion and a power that reaches inside your heart and clings there.

In ‘Broken English’, she describes the embarrassment she used to endure in the supermarket in Canada when her mother scolded the young Rupi in a mixture of mainly Punjabi and you guessed it, a few lines of…

Later, the poet will understand that her parents left the most precious elements we all have (family and friends) to gift their children in a new country, a very different sort of life to theirs or their forefathers.

And how Kaur has devoured it – and the gratitude and affection she clearly feels for their act of sacrifice and belief is itself a work of art – and undoubtedly shows off her talent as a writer.

She has long been hailed as just a social media star for her pithy reflections on life – especially as a young woman of colour.

By the reaction and the huge crowds she drew, she clearly has another considerable constituency in India who connect more generally with her musings on life and love and affirming the feminine and opposing discrimination and a lack of diversity.

In some ways, she represents the future of writing and the opening day started with someone who has been at the top of the writing game (if it can be called that) for more than 25 years and represents a different world when aspiring writers needed publishers, editors and agents.

Pico Iyer is a novelist, essayist and travel writer, and much better known in America, where he lived and worked after a thoroughly British education that took in Eton and Oxford (and a double first in English). He made the inaugural keynote JLF speech, ‘Charting a World without borders’.

Wise, humane, and topical, he drew ripples of laughter when he said ‘weapons of mass distraction’ were both destroying us and helping us to connect.

Earlier too, the audience on the front lawn heard from one of Britain’s most iconic playwrights – and a man who spent some of his early life in colonial India.

Sir Tom Stoppard is 80 years old (and certainly doesn’t look it); he reminisced about his time in Darjeeling at school and the way the Second World War and his return to England had left him feeling superior and rather disposed to the world of the Raj – a view which changed later.

In a response to an audience question about silence in drama, he recounted how as a young journalist on the Western Daily Press in Bristol he had heard (Sir) Harold Pinter talk about two different forms of silences in drama.

It clearly left an impression on the young playwright whose ‘Rosencrantz and Guildenstern are dead’ broke new ground in British drama and gave it both a European and Absurdist edge.

Both Iyer and Stoppard represent an old guard of sorts, men of letters whose works were often pathbreaking for their time and who gave a new voice to old problems. Kaur’s is just as striking and forceful but reflects perhaps a new world which needs new tools to fight continuing injustices and imbalances.

As Iyer said you change the way the world thinks, and the world changes.

Earlier, festival directors William Dalrymple and Namita Gokhale welcomed booklovers to the 11th edition of the Jaipur Literature Festival. Dalrymple said JLF was the world’s biggest (it certainly feels it), and had become like a Woodstock or Glastonbury for those who loved the written word.

Sanjoy Roy, managing director of Teamwork Arts which produces the festival, said it remained free for a reason – to share and debate knowledge and ideas, as a democracy must.

Interested in books – live in London?
https://www.meetup.com/London-Books-Without-Borders
and check in with Globooks, providing the latest world fiction reviews and coverage of events associated with Books without Borders