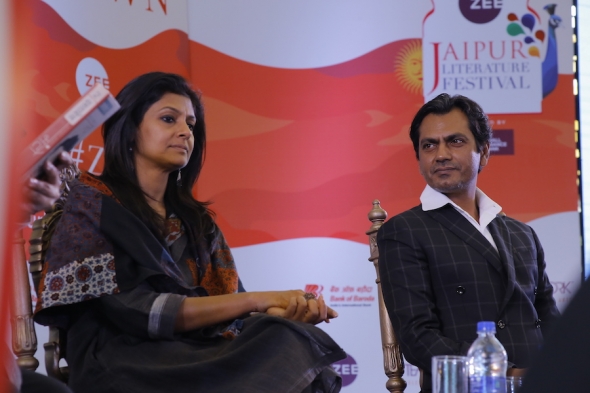 Directors Anurag Kashyap, Nandita Das, and Nawazuddin Siddiqui…are we in Cannes or at a book festival?

WHETHER it was Bollywood, or non-Bollywood stars, or India’s Republic Day (a national holiday) or the lure of political heavyweights from Afghanistan (Hamid Karzai) and India (Salman Khurshid), the crowds on the second day of the Jaipur Literature Festival were huge.

Let us say that again – at one point, the man in charge of running the festival, Sanjoy Roy, Teamwork managing director, had to order every person on the front lawn to take a step back.

They did – and the session with Nawaz Siddiqui and director and actor Nandita Das talking about their recently completed Saadat Hasan Manto biopic began with crowds still filling almost every inconceivable space.

www.asianculturevulture.com had already retreated to the relative sanity (almost scuppered by the impending appearance of star director Anurag Kashyap) – on the press terrace. It didn’t materialise.

By the last session, ‘Republic of Rhetoric, Free Speech in India’, a certain festival civility had returned – though the film theme continued to reverberate as the panel discussed ‘Padmaavat’ (‘Padmavati’in earlier incarnations). One part of the country can see it; others can’t (Jaipur being one of them) because it offends some communities’ sensibilities and could cause violence and the state governments are too nervous about theatres screening the film. London=based author Salil Tripathi moderated the lively discussion on free expression.

Perhaps, the topic was no surprise at the last session as panel member Vani Tripathi Tikoo spoke about her role on the Central Board of Film Certification. She did point out that it was not a ‘censor board’ as everyone seemed to believe. Yeah, Yeah. She’s a politician from the ruling BJP, but at least she is steeped in film, theatre and television – acting in more than 40 productions.

She was also the excellent moderator of the morning Kashyap talk, ‘The Hit Man’.

It was she who mentioned ‘Bandit Queen’(1994) in the last session, a film which also came up with Kashyap.

Director Shekhar Kapur was not yet famous for ‘Elizabeth’ (1998) but while his ‘Bandit Queen’ – the incredible tale of Phoolan Devi – sold into virtual slavery and raped more than once by higher caste men, she fought back, formed her own band of outlaws before being jailed, serving time and then becoming an MP, only to have her remarkable existence cut short by an assassins’ bullet. Many thought it was banned in India because of its violent depiction of caste antagonisms, but Tikoo said it was the nudity that tipped the balance and at that time.

The crowd on the front lawn

Caste antipathies is something that is covered rather brilliantly in Kashyap’s latest release, ‘Mukkabaaz’ (‘The Brawler’).

Oppressive and pervasive, it thwarts the ambitions of the lead character who aspires to become a champion boxer. The central character also rather undiplomatically falls in love with the niece of the high caste man who makes his life an utter misery after an one act of defiance.

Tikoo applauded the film in the session with Kashyap – saying it showed the reality of India.

Kashyap was brilliant value in this session – in conversation with Tikoo, a friend and old theatre buddy.

Parts of their chat were in Hindi but Kashyap covered a lot of ground from his early entry days into filmmaking through writing – rubbish films he didn’t believe in – but wrote to sustain himself, meeting and teaching Ram Gopal Verma (one of Bollywood’s undoubted auteurs) Hindi (perhaps not completely a joke!) to making it in Cannes with ‘Gangs of Wasseypur’.

One of the actors who joined him in Cannes that year (2012 and www.asianculturevulture.com was there) was Nawazuddin, who had the lead in part II of Gangs. He had been plucked from virtual obscurity to play his first starring role.

Nawazuddin has been a mainstay in Kashyap films for a while, but increasingly is in demand abroad and in Bollywood. He can currently be seen in the UK in the BBC’s global drama, ‘McMafia’ and last year he appeared alongside the Badshah of Bollywood himself, Shah Rukh Khan, in another gangster flick ‘Raees‘.

Last session of the day on free expression

Most of this session with Vinod Dua posing the questions was in Hindi.

It’s clear that Siddiqui has quite a following and the film they have been making on Manto will be eagerly received in some quarters.

Manto wrote in Urdu, and is also claimed by many in Pakistan – he moved there from Bombay (as it was back then in 1947) shortly after Partition. No Indian/Pakistani writer has probably written so much about the divide and the depredations it brought.

Importantly, Das said her film was very much her response to the now, to what was happening in the world around us.

Like Kashyap, she too is a regular in Cannes; she has served on the jury and actually spoke to us in 2015 about this very project and had begun raising funds for it.

She might not have quite said it, in this way, but it will no doubt show that what unites us is more than what separates us and that to engage in political discourse without hatred and the fear of violence is central to any democracy – and amply emphasised by the last session on free speech in India. Can we all continue to hope…?

Interested in books – live in London?
https://www.meetup.com/London-Books-Without-Borders
and check in with Globooks, providing the latest world fiction reviews and coverage of events associated with Books without Borders

Last night British dance company Akademi unveiled its new ‘The Troth‘ (see the preview story here) – it was quite magical in the stunning surroundings of Hawa Mahal (see Instagram in Jaipur. Very poignant and moving, it’s a fitting tribute to the 60,000 soldiers from these parts who perished in the horrors of the First World War in North Europe. The company take it on a short tour of India now and return to the UK with it in late February – see the story for UK tour details… (picture: Glyn Ley).