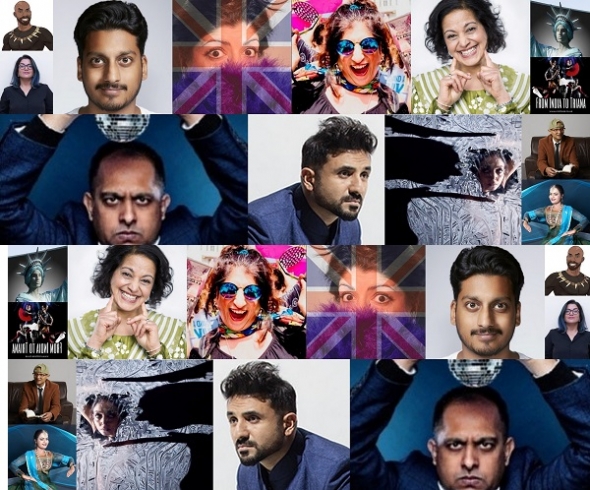 Stuff to chortle at, boogie and expand your mind…

AWAY from theatre (covered on another page here), there is still much to see and sample at the Edinburgh Fringe Festival which began on August 2, officially.
Our guide isn’t meant to be comprehensive or definitive, but it will give you some ideas…
In recent years, the number of South Asian comedians making a beeline for Edinburgh has increased – not only home-grown stand-ups, but many from abroad too, but with roots on the sub-continent and here’s what we found to tickle the funny bone of anyone who might want to share a laugh with someone of the brown persuasion on stage… (all shows are 60 minutes, unless where indicated).

‘Ahir Shah: Dots’ at Monkey Barrel. 9-12 Blair St, EH1 1QR Comedy August 8- 25 (1.45pm)
Well-established and polished, Ahir Shah returns to Edinburgh for a third year in a row. Appearances at the Apollo and on BBC’s ‘The Mash Report’ make him a hot ticket.
https://tickets.edfringe.com/whats-on/ahir-shah-dots

A wry look at Britain and British Asian life as seen through the eyes of someone born and raised in India. The New York Times no less gave him the accolade of being “India’s most intelligent comedian”. https://tickets.edfringe.com/whats-on/anuvab-pal-democracy-and-disco-dancing

Yorkshire-born and internationally raised lad makes his fringe debut. Touted as the next big thing by the Herald and well-known comedian, actor and writer Simon Amstell, Arnab Chanda is one to watch. “Arnab Chanda is the funniest person on earth” said Amstell, the London-living Chanda professes not to care, much, if at all.
https://tickets.edfringe.com/whats-on/arnab-chanda-boy-from-earth

‘Aditi Mittal: Mother of Invention’, Assembly George Square, EH8 9LH August 8-25 (5.30pm)
Already a Netflix star (through ‘Comedians of the world’ and an hour-long special), Aditi Mittal is a mother on a mission. Dives headlong into mummy issues and has an “absorbing storytelling style”, according to site, Chortle.co.uk.
https://tickets.edfringe.com/whats-on/aditi-mittal-mother-of-invention

‘Ehsaan Akbar: Infidel-ity’, Gilded Balloon Teviot, Teviot Row House, EH8 9AJ August 8-13 & 15-26 (3.45pm)
A rising star name with many TV credits to his name and previous at Edinburgh, Ehshaan Akbar tackles masculinity and his relationship with men, women and himself. Love and loss feature, as do ‘man buns’. Saucy.
https://tickets.edfringe.com/whats-on/eshaan-akbar-infidel-ity

‘Immigrant Diaries – Sajeela Kershi and guests‘, The Stand Comedy Club 3-4, 28 York Place EH1 3EP, until August 12 only (3pm)
Award-winning show is back, taking on immigration, migrants, the refugee crisis and Brexit, with charm, aplomb and humour – as is the way with Sajeela Kershi. Differing guest line-up: “Hollywood legends, comedians presenters, performers and even the odd politician”, says the blurb. We saw a while back, and gave it *****.
https://tickets.edfringe.com/whats-on/sajeela-kershi-fights-like-a-girl

‘Hardeep Singh Kohli: It’s Hard to be Deep’ Assembly George Square Studios, George Square, EH8 9LH August 7-22 (5.15pm)
Perennial favourite – and master of mixing the personal and the political, Hardip Singh Kohli covers huge ground, from high culture to low and everything in between. He’s good on Boyzone – that’s not a dubious video game, but a 1990s pop group. His show last year was a romp through his life, good and bad, poignant and funny. He talked about it in Edinburgh with us (https://youtu.be/WD-jrBOKLP0)
https://tickets.edfringe.com/whats-on/hardeep-singh-kohli-it-s-hard-to-be-deep

‘Ishi Khan: I’mMigrant!’ – Laughing Horse, The Cuckoo’s Nest, 69 Home Street EH3 9JP August 15-25 (50 mins)
British comedian born in Zambia with Indian ancestry ponders on her identity and her status as a Brizambdian – yes, not as serious as it sounds. Ishi Khan’s sense of fun and silliness is to be expected – some Bollywood dancing may be necessary. You have been warned. We know her. She is wonderful. She has form. https://tickets.edfringe.com/whats-on/ishi-khan-i-mmigrant

‘Lubna Kerr – Where are you really from?’ – PBH Bar Bados Complex, 65 Cowgate EH1 1JW August 8-18 and 20-25 7.10pm (45 mins) Sparky and warm, Lubna Kerr will make you laugh – of that we have no doubt. She will do so with skill and no little effort, honed over a lifetime of family, and being asked this one somewhat awkward question. What emerges from her Scottish, Muslim, and Welsh descendants is an ode to modern Britain. Love it and it will love you back. Trust us or the Asian Aunty within. A rising TV star too and part time pharmacist, she and her show are a joy to behold. Here’s why…

‘Mawaan Rizwan: Werk in Progress’ at Heroes, TheSpiegelYurt, Potterrow Underpass, EH8 9AA, until August 12 only
Some say he is still one to watch – where have you been? Talented performer mixes comedy and capers with deep insights into the human condition. Not a joke. Maybe. We’ve been watching. For a while. He’s totally ace.
https://tickets.edfringe.com/whats-on/mawaan-rizwan-werk-in-progress

‘Vir Das: Loved’ – Soho Theatre – Gilded Balloon at the Museum, Auditorium, Lothian Street EH1 1HB Until August 10 only. (7.30pm)
Indian and modern and stretching boundaries, Vir Das traverses the notions of love and what it means to love yourself first, before you can find ‘the one’. This is a comedy show “for those who are on the fence” (about self-love), says the blurb. Painful and funny, Das’s international offering will come and go…
https://tickets.edfringe.com/whats-on/vir-das-loved

‘Brown Panther – Ruven Govender’ – Laughing Horse, The Counting House, 38 West Nicolson Street, EH8 9DD August 7-12 & August 14-19 and 21-25 (7.45pm) 50mins.
His previous show last year, ‘Ethnic Cleansing’ was a sell-out and he returns now as a Brown Panther. Rave reviews from down under for Ruven Govender, but will Brits take to his politically incorrect (allegedly) banter?
https://tickets.edfringe.com/whats-on/brown-panther-ruven-govender

‘I’m here all weak – Suren Jayemanne’ – Laughing Horse, Bar 50, 50 Blackfriars Street EH1 1 NE August 8-25 (3pm, free) 55 mins
Another name and face from Down Under, where he conquered television and had sheep queuing to cheer (we imagine), Suren Jeyemanne is not one to stand still or miss a gag about race and multiculturalism, poking at the differences but embracing our common humanity. He thinks there is one. He could be right.
https://tickets.edfringe.com/whats-on/i-m-here-all-weak

Dance as you have never seen it before – from the origins of movement in India through to the energy and dynamism of flamenco. “A colourful map of expression and innovation of communities merging together in an incredible fusion of music and dance,” says the blurb.
https://tickets.edfringe.com/whats-on/from-india-to-triana

‘India Flamenco – A Gypsy Tale‘, Alba Flamenco Aug 2- 26 17:30 at Alba Flamenco, 74 East Crosscauseway, EH8 9HQ – August 8-12 & 15-20 and 22-25 (5.30pm) 60 mins.
Flamenco has its roots in India and travelled the continents before it settled in Spain and became what it is today. Expressive, passionate, deep and intense, and from the simplicity of early Kathak (a classical Indian dance style) through the Middle East and belly dancing, these dancers take you on an incredible journey…
https://tickets.edfringe.com/whats-on/india-flamenco-a-gypsy-tale

Seeta Patel is a tour de force and this show represents the very best of her work and ideas. Bharatanatyam is a traditional classical South Indian dance but in Patel’s expressions and movements, it is radical and challenging. Lina Limosani brings another type of invective and focus, making this a rich work full of meaning and reflection – on colonialism, identity, equality and servitude. Imaginative and mesmeric, it is a dark fairy tale, beautiful and unnerving at the same time. Miss this and repent at leisure. See it and read our interview with Patel. A British Council Showcase (after an intial visit a few years back) it deserves to be seen widely. https://edinburghshowcase.britishcouncil.org/directory/artist/seeta-patel-and-lina-limosani/2019

‘Inspirational India‘ – Galarie Mirages, 46a Raeburn Place EH4 August 8-September 1. (From 10am)
If you love textiles, this is a must-see exhibition, says the blurb. For over 2,000 years Indian textiles have set trends – from Paisley pattern to liberty print, more recently. Marking its 33rd festival, the gallery grew out of the connections between Indian textiles and Scottish fabric work. There are things to buy and much of the work is individual and iconic. A treasure.
https://tickets.edfringe.com/whats-on/inspirational-india