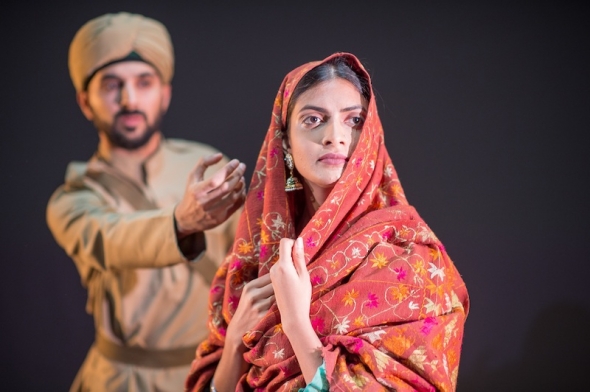 FOR THE FIRST time a British dance company has turned an Indian short story into a contemporary dance piece and is all set to premiere it in India at the Jaipur Literature Festival on Friday (January 26).

Akademi’s The Troth’is based on the classic short story by Chandradhar Sharma Guleri, published in 1915.

Without giving away the depth of this story, it tells the tale of a Punjabi soldier’s unrequited love, whilst caught in the horror and mayhem of the trenches.

Vidya Patel in The Troth

Guleri was born in Jaipur and taught at Mayo College in nearby Ajmer. His story, ‘Usne Kaha Tha’ is regarded as the first modern Hindi language short story of its kind and has been taught in Indian schools for almost as long as its creation.

Now North London Hampstead-based Akademi under director Mira Kaushik OBE has turned the story into a contemporary dance piece with the award-laden Gary Clarke (‘Coal’) helming as choreographer and director.

Akademi which has been in existence for some 40 years, does a range of work comprising classical, contemporary and private commissions, but ‘The Troth’ probably represents its most ambitious work to date.

After a short tour of India, ‘The Troth’ will first come to The Curve in Leicester on February 21 and will tour the UK until March.

The production has the backing of the British Army, and has received assistance from the War Museum and the Imperial War Museum. Kaushik has also enlisted expertise from the National School of Drama in Delhi.

More than a million men from the undivided subcontinent fought for the British Empire and some 60,000 are thought to have perished in the killing fields of Belgium and Northern France.

Kaushik told www.asianculturevulture.com that ‘The Troth’ was a unique and groundbreaking project in many ways.

“I don’t think a British dance company has ever premiered a new work in India and got the backing of India too (its government is supporting the work through several agencies, including the Indian Council for Cultural Relations and the whole production also comes under the banner of UK-India Year of Culture, which formally ended in 2017, marking 70 years of India’s independence from Britain)”.

Kaushik, who is not a dancer herself (a rare trait for the director of a professional dance company), speaking to www.asianculturevulture.com late last year, told us: “I am always dreaming and imagining new productions and originally I was thinking of doing something with 14-18 Now (a British charitable organisation, which is helping the country to remember its sacrifices during what was the first real World War), but it became much bigger.

“It was clear they could not help us take it to India. It is an Indian story and beloved by many – and not many Indians know about the contribution of the country to the First World War.”

Right from the outset, she knew this was going to be quite different in scale and scope to what we might expect from Indian dance – in many ways, it isn’t.

“This is a First World War story and I thought we cannot do this story as a bharatanatyam or kathak piece (the two best known Indian classical dance forms in Britain).

“I realised this work has to be based in western contemporary based movement, rather than any Indian classical idiom.

“Most contemporary dancers work in abstraction and I then I saw what Gary Clarke did in ‘Coal’.”

The context is all important and both UK and Indian audiences need to be taken on a journey both can understand and enjoy, Kaushik intimated.

“When I first thought about it, I thought this story was written just after the birth of Indian cinema (‘Raja Harishchandra’, 1913) and so I thought how would an Indian filmmaker set about making a silent film (of ‘Usne Haha Tha’).”

Kaushik told acv the production has no set as such but the backdrop will consist of a projector which will show actual footage from the First World War.

“Through colour and lighting it will be very stylised and more like watching a silent film.

“My brief to Gary Clarke was to create a living piece of silent film – a film which lives on stage.”

Kaushik had been hugely impressed by Clarke’s production ‘Coal’.

She wasn’t the only one – it won many awards and was regarded a pathbreaking piece of contemporary dance partially because it deals with an unlikely subject for a dance piece – the 1984 miners strike, which was among the country’s longest and most violent (with more than one bloody clash with police).

“After I saw ‘Coal’ I knew this is the choreographer I wanted to work with. Gary Clarke will make it happen.

“He has got the ability to translate a story board into movement.”

Clarke, who spoke to acv as he was taking the five dancers – including Vidya Patel – through their paces last year, revealed he was hugely excited about working on ‘The Troth’.

“As a choreographer, I am always excited about new challenges and this project has presented me with with many new avenues to explore and I have spoken to many people about it.”

He knew how precious and treasured the story was for many in India.

“I believe it is sacred to some and I really respect the story and want to do it justice.

“It is a universal story about love, loss and sacrifice and wherever you are in the world, we all understand those themes and I want to make sure the vocabulary is broad enough for all audiences.”

As Kaushik pointed out much modern dance is abstract and does not often have a clear narrative or one at all – something Clarke recognises.

“I think storytelling in contemporary dance is incredibly hard. People are always trying to find new ways forward. Not many people tell stories through dance but I think it is something I am good and skilled at.

“I want to tell things from the heart and stories with feelings and emotions and this story is emotionally fuelled. I think Mira saw that in ‘Coal’ and believed I could breathe life into ‘The Troth’.”

Clarke has never been to India before and has little experience of working with South Asian subject matter.

He knows that ‘The Troth’ could well set an important template – as an original dance work with a clear and substantial South Asian theme, but danced in a modern, contemporary style. Not many of those in India will be familiar with this.

“It is one of my jobs and is integral and important to look at the work through an audiences’ eyes. I must not get too carried away with the concept or the idea of this. We are very much making this work for an audience – it is at the forefront of my creative impetus and thinking.”

Listing
‘The Troth’ – Friday, January 26, Jaipur Literature Festival
Hawa Mahal – Jaipur, this is one of the iconic tourist sites in the city, 7.30pm