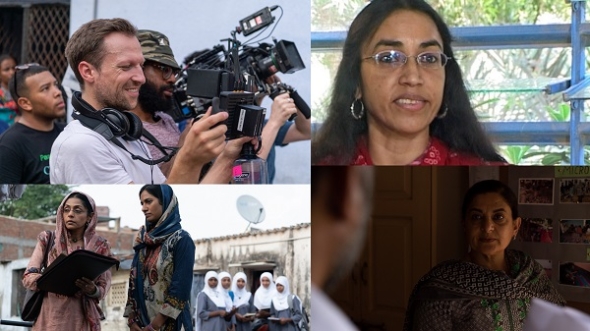 WELL-WORTH viewing and produced with a pedigree and panache that is hard to resist is ‘Into Dust’ which dropped onto Amazon Prime today (August 24).

Made by Academy Award winning documentary British filmmaker Orlando von Einsiedel, (‘The White Helmets’ 2016), ‘Into Dust’ is centred around the very remarkable and courageous Perween Rahman, who was murdered in Karachi, Pakistan in 2013.

A social activist and campaigner against poverty, Rahman was director of the Orangi Pilot Project Research and Training Institute, a development agency based in Karachi. Orangi itself is a low-income suburb of the sprawling mega-city and houses many whose basic living conditions are difficult. The area is regarded as a slum and was a part of the city that first ‘housed’ many who fled East Pakistan when it became Bangladesh in 1971.

Rahman and others were involved in making the lives of people living there just a little less difficult – helping impoverished residents with education, training, water supply and housing.

This film centres around the issue of water supply and it powerfully posits a world where water is a precious commodity like any other and certain people have a vested interest in hoarding and distributing it for financial gain.

Rahman (played by Indu Sharma in the drama) appeared to uncover a plot that essentially saw the city’s water supplies being diverted to wealthy residents by unscrupulous elements that gained financially and looked to have political backing at some level as well – though like much organised crime, joining the dots and making the connections is a fraught business in itself and the film faithfully depicts the danger Rahman was beginning to put herself in.

Sudha Bhuchar, who has appeared on the stage and in many TV productions and films, including ‘Coronation Street’ and ‘Mary Poppins Returns’, (2018) is full of admiration both for Perween and her sister Aquila Ismail whom she portrays in the drama.

‘Into Dust’ gathers pace inititally with the terrible and devastating news that her sister, Rahman has been shot dead by unknown assailants who ambushed her.

At the time, Ismail was living in Abu Dhabi with her husband and children and returned to Karachi not just to mourn her sister’s death but take up the fight her brave sister led.

She is now involved in the Orangi Project herself.

“They are both role models and Perween was a real spearhead and devoted her life to the Orangi Town Project. They both had extraordinary careers commercial careers – Perween trained as an architect and Aquila was an engineer, but gave that up to fight for others,” Bhuchar told www.asianculturevulture.com.

There is no question that both women are extraordinary and both are committed to social justice.

“Perween really chose to make a difference,” continued Bhuchar. “I got to meet Aquila in Karachi and was able to see the work that she was doing there. I got to read a lot about the sisters and about their early lives – being displaced from Dhaka, in Bangladesh, and re-locating to Pakistan. It helped me to portray a real person.”

Bhuchar was one of the few members of the cast able to travel to Karachi for filming – many of the Indian actors had to shoot their scenes on a set in India.

While the 40-minute film is a very traditional drama – there is a section that steps back into the reality of Ismail’s situation.

“She is still fighting for justice, no one has been convicted yet – the case has gone to the Supreme Court,” explained Bhuchar.

She is also full of admiration for Einsiedel and the production team that made the film.

“He is an extraordinary filmmaker and I feel very privileged to have worked with him.”

She felt Einsiedel brought the same level of passion and commitment to ‘Into Dust’ as he had done with his Oscar winning short, ‘The White Helmets’ and that level of personal conviction is also very much evident in his first documentary feature, ‘Evelyn’ (2018) which is about his brother’s tragic suicide 13 years earlier.

It features Einsiedel going on walks – that his brother liked when he was alive – with other members of his family and trying to make sense of why Evelyn took his own life. It premiered at London Film Festival, was broadcast on the BBC in 2019 and is available on Netflix now. It won best documentary at the British Independent Film Awards in 2018.

“It’s a deeply personal story that Orlando is highlighting and he wants to have this kind of urgent global conversation now about water, climate change and equality and equity.”

For Einsiedel, ‘Into Dust’ isn’t just a film – there is a campaign and a real push to throw a light on what is happening in some parts of the world and how some wealthy elites are already insulating themselves from scarcity and profound environmental degradation.

“London is another city where water is an issue. Orlando’s Grain Media (the production company) have taken a lot of time and care with this story. They are really looking to make an impact,” Bhuchar stated.

The actor, who is also well-known as the co-founder of Tamasha Theatre, and now manages her own new company, Bhuchar Boulevard, has been writing a lot more recently – two of her shows were recently produced this summer (see links below) and she is working on a children’s play, ‘Artichoke Hearts’, adapted from the novel by Sita Brahmachari.

Expect that to hit schools next year – but in the meantime don’t miss ‘Into Dust’, it’s powerful and Rahman’s and Ismail’s work remains important as the world continues to grapple with the climate crisis and increasing inequality.

‘Into Dust’ is available on Amazon Prime now…