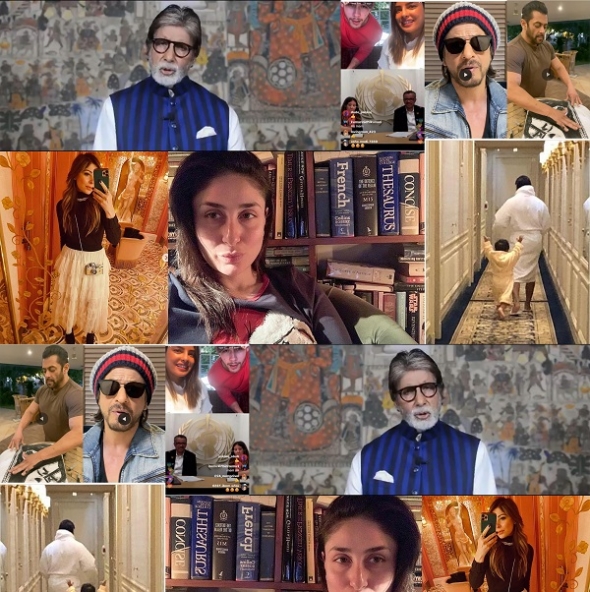 As India went into a 21-day national lockdown earlier this week, the actors and other personalities have been keeping spirits up and providing health information…

WITH many stars confined to their homes, they have mostly taken to the smallest screen (a phone) and social media to voice important public health messages – and some are just providing updates as to what they are doing with their time.

From Priyanka Chopra to Amitabh Bachchan and Deepika Padukone, Shah Rukh Khan and Salman Khan – they have all been doing it.

Just making the headlines now are the tributes being paid to Floyd Cardoz, a celebrity chef, who died of the virus in New York yesterday (March 26). The Mumbai-born, Goa-raised chef was well-known for his eateries, Poonwalla and Tabla in New York. He also had Bombay Canteen and O Pedro, popular restaurants in Mumbai.

There is also the ongoing debate about Kanika Kapoor and where she picked up the virus – the well-known singer, was in London and tested positive for the Coronavirus on her return to India in March. She had been doing meet and greets in London and actively socialising at events, parties and gatherings in Kanpur and Lucknow. She appears now to be in hospital (though in India positive cases are routinely admitted) and has deleted the related posts. She has come under heavy fire for not going into isolation, but she says she did once had symptoms and her case was confirmed as positive.

The Big B released a Twitter video yesterday afternoon (March 25) homing in on a Lancet study that indicated that the virus can be transmitted through a fly sitting on infected excreta and then can carry this with them. While the video is in Hindi, he tweeted, ‘Use your toilet’.

Perhaps the biggest media attention (certainly in India) was on Priyanka Chopra’s.

The 15-minute broadcast went out late on Monday evening (March 23) UK time and was picked up by all the Indian TV channels yesterday.

It begins with Pee Cee’s (PC) husband Nick Jonas asking about whether he (as Type 1 Diabetic) and Priyanka, as an asthmatic, were at extra risk. Dr Maria as PC calls her, says yes some groups of people are more susceptible to serious illness from Covid-19 and anyone can be hospitalised. Jonas then disappears and PC asks questions submitted by fans. She has more than 50 million followers on Instagram.

While the interaction got a lot of play on Indian mainstream media, many in India were still trying to get their head around the lockdown announced late on Sunday evening to worry about PC’s latest social media post.

Nevertheless the more stars that can encourage others to stay at home, the better it will be for all. India currently has more than 600 positive cases and several deaths and there are fears that the virus will spread without drastic action. Some states had already imposed a lockdown ahead of the national one.

Shah Rukh Khan also took to social media to post about his quarantine regime and posed with guitar and encouraged others to stay at home.

Many celebrities have also been posting about how their pass the time – Salman Khan is painting, and self-isolating in Bandra, Mumbai. He also shared a video of himself talking about the crisis and a media video about it just three days ago.

Kareena Kapoor Khan posted a picture of what appeared to be hubbie Saif Ali Khan and son, Taimur, in bath robes and telling people to “be responsible. Be Home. Be safe”, just a day ago.

Indeed, mind how you all go and stay safe! Stay home!

Privacy & Cookies: This site uses cookies. By continuing to use this website, you agree to their use.
To find out more, including how to control cookies, see here: Cookie Policy
← London Film Festival 2018 – end game, highlights and a wrap!
‘House of my fathers’ – mixing myth, fable and allegory to tell a unique story about the conflict in Sri Lanka (London Film Festival interview) →