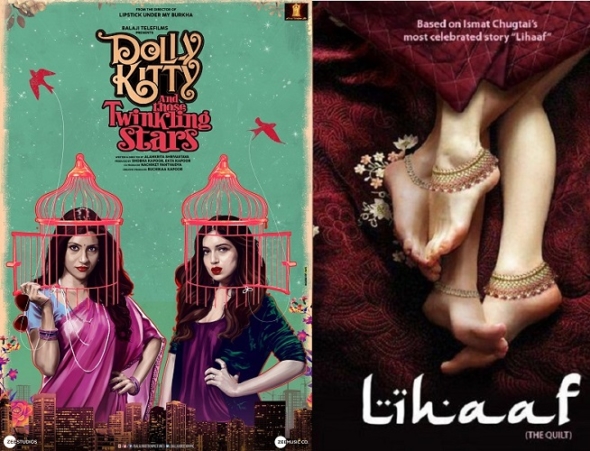 We would have been marking the first day of the UK Asian Film Festival, but for the Coronavirus crisis…still…we can look forward…

TODAY would have seen the opening of the UK Asian Film Festival with the film – ‘Dolly Kitty and those Twinkling Stars’ in London.

The festival was scheduled to run from March 25-April 5 in London, and also in Glasgow, Edinburgh, Leicester and Manchester, but sadly, and predictably, the Coronavirus Crisis has put paid to that.

‘Dolly Kitty and those Twinkling Stars’ was eagerly anticipated and is director Alankrita Shrivastava’s first feature film since the stupendous success of ‘Lipstick Under my Burkha’ which came to the festival in 2017 and caused such a huge stir globally and was initially banned in India.

Her new film stars two figures very familiar to www.asianculturevulture.com – Konkana Sen Sharma has been a feature of the festival (formerly Tongues on Fire) before and Bhumi Pednekar spoke to acv in December at the International Film Festival and Awards Macau (IFFAM)

The Dolly film centres around these two women and the choices they make and includes a giant sculpture of an intimate part of a woman’s anatomy which is attacked by men angry at the idea that this might be ‘art’ or an expression female sexuality and desire – a theme of the film.

It would have been great to catch up and Shrivastava was all set to come to London to unveil her film.

We were also gearing up to host our own pre-screening reception for the premiere of the film, ‘Lihaaf’ on Saturday, April 4 at the Regent Street cinema in London. Director Rahat Kazmi and a large number of the cast including possibly – Tannishtha Chatterjee – another previous festival favourite – were expected to support the film and participate in the post screening Q&A. The film is based on the famous short story by celebrated Urdu writer Ismat Chugtai, played by Chatterjee. Her story was hugely controversial for the time – as it was about falling in love with another woman in the 1940s in Pre-Partition India.

Nevertheless, as the festival’s digital media partners since 2018 – we’ll be looking back at some of our coverage and the high points over the next few days.

To get us started here’s Samir Bhamra, UK creative director of the UKAFF talking to us back in November at Film Bazaar – the market part of the International Film Festival of India (IFFI) – in Goa about how he chooses the films to screen. The full video on Youtube includes interviews with other British filmmakers and personalities at Film Bazaar.

The full video of British filmmakers and personalities at Film Bazaar in Goa in November 2019.