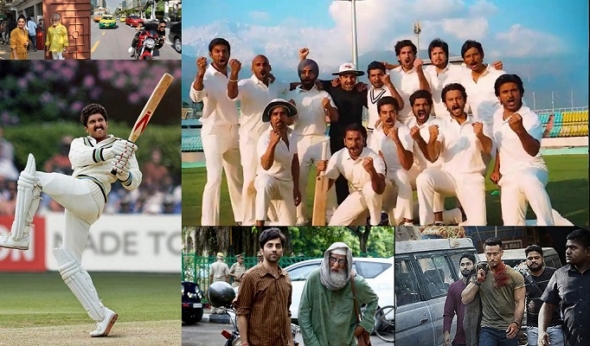 So, our Mumbai cineaste has much to exercise them, even if they are only four days into a national lockdown, which had already begun in B’town…

By Rodrigues C
HEY THERE dudes! What’s happening with you?

The last time we sat to write this column, China was (still) reeling under the spread of Coronavirus, as it was known back then.

There were thousands of cases of the virus within the country but the world beyond was all a rosy picture. Naah, we aren’t talking about the endless conflicts and trade wars… the entertainment industry was functioning normally here. .. both Hollywood and apunka (our) Bollywood. Some big Bambaiya philims such as ‘Sooryavanshi’ were lined up for releases in March. It was time for Akki’s fans to see their Thai-hardened fhiter flex his muscles on the bada parda (big screen). The janta (people) was eagerly waiting.

But Coronavirus, which became Covid-19 by then, started spreading its tentacles to Italy and Spain, and reached Indian shores. Malls and theatres were abruptly asked to down shutters. In Bambaiya parlance, ‘industry ki lag gayi’ (destroyed).

But let’s rewind a bit to the first week of March. ‘Baaghi 3’ was released on March 6 and got a jhakaas (very good) opening.

It collected ₹17Crore (Cr), over £1.9m on day one. By the end of the first week, it made a whopping ₹87Cr (over £9.7m). But then tragedy struck in the second week. Theatres and malls, along with gyms and swimming pools, were asked by the local government to shut down. and then allowed to re-open.

The second weekend, when some of the restrictions were already in place, saw the release of ‘Angrezi Medium’ (starring Irrfan Khan and Kareena Kapoor) .

By this time, Bambai and the rest of India was already in the grip of Coronavirus fear, which was compounded thanks to the thousands of Whatsapp groups that dish out fake information about everything on earth.

Next in line was supposed to be the release date of one of the biggest films of the year, the Akshay Kumar-Ranveer Singh-Ajay Devgn-Katrina Kaif starrer ‘Sooryavanshi’.

Rated by IMDB as one of the most anticipated films of the year, it failed even to take off due to the severe restrictions that were put on people’s movements all over India.

On March 12, before its original release date of March 24, the makers of ‘Sooryavanshi‘ announced that it wouldn’t be released as scheduled “keeping in mind the safety of the audience”. This was the second time the film’s release dates had been changed.

Earlier, it was slated for an Eid 2020 release (May 23), but was changed because the film’s makers didn’t want a clash with the Salman Khan-Disha Patani action diramaa ‘Radhe‘ (May 22).

Incidentally, on March 12, the Delhi Chief Minister Arvind Kejriwal announced that all cinema halls in the capital would be shut down.

So, where does this leave us now?

Currently, there is no certainty as to which movie will release when. Bole to? (What do you mean?).

States are constantly announcing new restrictions every few hours. In aamchi (our) Mumbai, an assembly of more than five people is banned by law. Though all the lcoal restrictions are in force till March 31, the national lockdown continues until April 14 and very are likely to get extended as Covid 19 cases show no real signs of abating. But if the lockdown helps in containing the virus, films may be back in business…

There is talk of ‘Baaghi 3’ getting re-released. Reportedly, director Ahmed Khan and producer Sajid Nadiadwala are in favour of it, as it’s a successful franchise which didn’t reach its full potential at the box office; it was expected to collect ₹150Cr (Over £16.5m) at the box office.

Yet it seems co-producer Fox-Star isn’t in agreement with the duo as this entails additional marketing and publicity costs.

Also, there is no guarantee moviegoers fill flock to the theatres any time so soon, even if restrictions are lifted next month.

On the other hand, ‘Angrezi Medium’ producer Dinesh Vijan has already expressed his desire to re-release the film “once normalcy is restored”.

As far as ‘Sooryavanshi’ is concerned there seems to be no decision yet on its new release date considering the film will have to employ a new marketing strategy; a film starts its promotions at least a month before its release and many of the activities are centred around ongoing event and festivals. If reports are to be believed, the movie may also release along with ‘Radhe’.

Moving ahead, April also has its share of releases, the biggest one being the Ranveer Singh cricket bonanza ‘83’.

Originally scheduled for April 10, the movie’s release has been postponed indefinitely.

There is no news on the other big releases of April such as the Amitabh Bachchan starrer ‘Gulabo Sitabo’ (April 17) and Janhvi Kapoor’s ‘Gunjan Saxena – The Kargil Girl’ (April 24).

The month’s other releases include smaller films such as ‘Babloo Bachelor’, ‘The Pickup Artist’, ‘Darbaan’, ‘Lootcase’, ‘Code Name Abdul’ and ‘Ludo’.

So, see you folks all next month, whatever happens – Stay Home and Stay Safe!