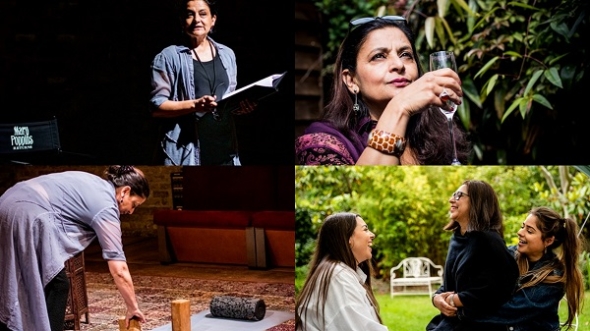 One-woman show is poignant, powerful and funny and makes for a wonderful evening…

SUDHA BHUCHAR has a great story to tell as one of the leading theatremakers of recent times – she is a co-founder of Tamasha which has staged many fine productions and nurtured much talent since its inception 1989.

The returning ‘East is East’ – which celebrates 25 years this Autumn is a Tamasha original. Bhuchar left Tamasha in 2015 to found Bhuchar Boulevard to develop her own projects and focus more on her own writing – ‘Evening Conversations’ is a wonderful window into her world as an actor, mother and wife.

What really makes ‘Evening Conversations’ a considerable cut above any similar type of free-flowing stage reminiscence and reflection on life (in the present) is the depth, range and sheer breadth of subjects covered.

It’s a rich, intimate and insightful piece of theatre that will both make you chuckle and move you – almost with the same sentence.

Her professional life isn’t covered as much as you might imagine – there is an almost passing reference to ‘Eastenders’ and the mind-blowing (to this very impressionable young man) love triangle that her, Shobhu Kapoor and Deepak Varma inhabited – (remember Sanjay, Gita and Meena!)

She humours her femme fatale persona in one of the biggest TV programmes of its time and co-opts that unmistakable tune to her last rites…her black humour works – even if it is on the nub, as some might say.

More of the chatty 60-minute show is inflected with a self-deprecating, dry wit and much of it revolves around the soft tensions between her and early adult sons – one in work, while the other is at university.

Their millennial outlook bumps up against their mother’s more lived-experience outlook and their rather more gilded journey from school to university to work.

She had criss-crossed three continents as a migrant long before she was even 16 – from the rough beauty of East Africa to her Punjabi and Hindi school years in Chandigarh, Punjab – before uprooting again to Norfolk and settling in Britain, with her mother, father and sister and two brothers in Tooting, South London.

And then there’s the mixed faith marriage to Asif, whose family are originally from Rawalpindi, and before that, the early death of her father who couldn’t get work as a teacher in London, despite being qualified and stimulating Oxbridge hopefuls back in East Africa.

Still bitterness and broken dreams is not what we trade in (or what White Entitlement will frame as that chip on the shoulder, blithely transferring blame on the innocents in this brutal equation of have and have-nothing).

And besides, Sudha and Asif, through talent and toil, have made it to leafy Wimbledon, where an upbeat and positive multi-culturalism is in full swing (why do we let politicians rubbish own experience?) and comes into its own during that first unforgettable lockdown.

And of more recent events, Bhuchar’s return to her homeland and Mumbai – it really should be Bombay – for there, there is a reverse movement which seeks to erase its syncretic, diverse, rich and glorious past.

There is so much here – it is just banter and delivered as such, but beneath the joshing and verbal moshing of mother and sons, these can be tricky, difficult, tough, taboo subjects – Bhuchar’s skill is to put them on a table and invite you to feel and weigh them up for yourself… with humour and heart.

Also on the same bill as ‘Evening Conversations’ and one of the final shows bringing the curtain down on The Footprint Festival (43 shows both in-person and digital, and comes to an end this weekend), on Wednesday (July 28), was ‘Life Laundry’.

This is also penned by Bhuchar but has a different family at the centre of the stage dialogue – her good friend and fellow actor, Shaheen Khan and two actor daughters, Sophie and Nyla take to the stage to do verbal combat…

This too has an intriguing, humorous deft touch that belies its complex subject matter.

Khan also married across a divide – her husband is white, Canadian; she survived cancer and remains partial to a tipple.

Both Sophie and Nyla are wonderful foils and this time we actually have the oppositional voices – the repartee is not always gentle – and again it digs deep and the women do battle over taboo subjects with frankness and insight.

In both pieces, both Bhuchar’s and Khan’s – their mothers are important figures – mostly in the background but it’s clear their strength and brilliance radiates gloriously in their talented offspring – how proud would they be…now. Your girls done good, Ma Bhuchar and Khan.

Bhuchar actually appears as Shaheen’s mother in one final section of ‘Life Laundry’ – the rhythm of sparring trio was broken and it took you to a different place.

Both pieces are marvellous for allowing you into the richness of both families and their multiple heritage influences – the tick box culture of industrial ‘Diversity’ seems almost facetious and offensive in contrast, and yet we know there are elements who could, and would, lift such a reflection out of context, twist it and say, all is fine, just stop complaining (back to the chip on the shoulder arguments).

Pointedly – we do need more of these conversations – to stop (often politically motivated) divisions derailing us all, whole and proper – and the only people laughing then will be those who never cared in the first place and for whom Diversity is a dirty word that make willing enemies of us all.