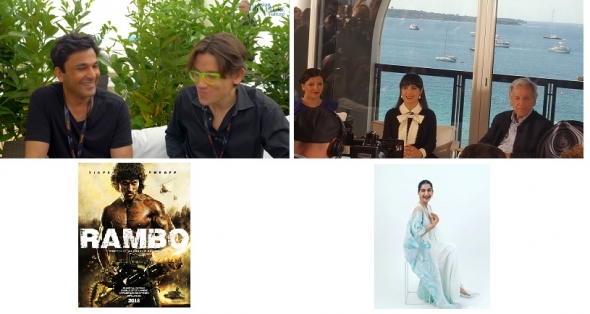 LET US ALL SAY WHAT a huge shock it was to hear about the terrible news from Manchester.
Such a terrible act and designed to murder and maim children and young people. It’s now been confirmed that a suicide bomber let off an improved explosive device, killing 22 and injuring 59 gathered together to hear the US pop star Ariana Grande at the Manchester Arena yesterday (May 22).
Our hearts go out to anyone caught up in this horrifying attack on the vulnerable and the innocent. We must #standunited and not let the haters divide us – from any side.
Art and artistic expression opens minds and hearts – and just as the authorities here in Cannes have condemned this atrocity, they have also articulated a deeply-held belief that by sharing art and entering to dialogue and discussion, we all have the opportunity for empathy and the desire to make our world a better place for all.
Cannes released an officials statement earlier: “The Festival de Cannes would like to express its horror, anger and immense sadness following the attack on the public and the city of Manchester last night.
“This is yet another attack on culture, youth and joyfulness, on our freedom, generosity and tolerance, all things that the Festival and those who make it possible – the artists, professionals and spectators – hold dear.
The Festival de Cannes invites all festivalgoers to show their solidarity with the victims, their families and the British people”.
Here in the press centre, there was clapping as the minute’s silence ended.

*With those thoughts very fresh in everyone’s minds, we were at the Salma Hayek talk earlier today. This is the Kering Women In Motion series of talks and was convened to discuss sexual violence against women.
Hayek actually said she was very effected by the news – her nine-year-old daughter is a fan of the actress-turned singer Ariana Grande. And she said that had she been performing in London, her daughter might have been there.
Hayek had lots to say on her career, Trump and standing up for women’s and minority rights. We have the full discussion on video and hope to put it out shortly. Subscribe to out Youtube Channel and you wil find it there.

*We are also just about to put out a video with well-known Indian and US chef Vikas Khanna talking about the drama-documentary, ‘Buried Seeds’ he has made with friend and fellow-US based filmmaker Russian award-winning director Andrei Severny. Khanna made the journey from Amritsar to New York as a migrant and collected a couple of Michelin stars along the way, befriended Gordon Ramsay – who stuck him on TV, and the rest as they say is history. He was later catapulted to fame in India when he appeared on that country’s version of ‘Masterchef’

*Also here is Bollywood star Tiger Shroff who has just signed for an Indian version of the classic, ‘Rambo’ and came to Cannes to announce it. He had a social media exchange with Sylvester Stallone, the original Rambo, who wished him well.
Shroff for his part was very pleased to have received such recognition and said the story will be adapted for an Indian context. It is expected to be released in 2018.

And rounding off our short news bites from here is the latest from Sonam Kapoor who is expected to walk the Red Carpet again this evening for the official premiere of ‘Happy End’ by one of Europe’s great directors Michael Haneke. Keep a look out for more from Cannes on on our Youtube Channel

We will have more on Aishwarya Rai & Sonam Kapoor soon… 😉 – make sure you’ve subscribed to Youtube (click above).

And that's all from Sonam's #LifeAtCannes tonight. Stay tuned for decodes, trends and more. Until next time! #SonamAtCannes pic.twitter.com/jPv8p4ZvOm

Not often we do this but she herself RT this…so…

And if you got this far – bravo! It’s actually our last day here and we will be working on editing several videos we have shot now and picking up other stories from London – goodbye #Cannes2017 Reviews and all to follow. Thanks, been great having your company…au revoir for now!