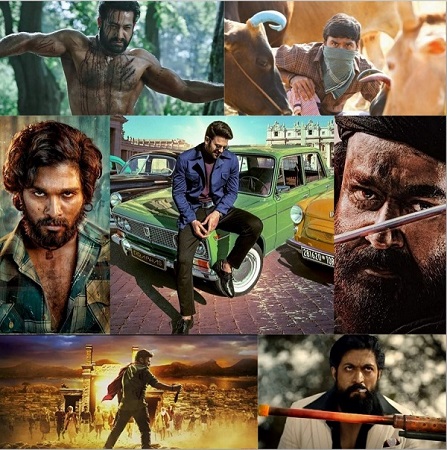 SOUTH Indian movie lovers have a lot to look forward to this year – earlier this month, Prakash Javedkar, Minister of Information and Broadcasting, lifted the country’s ban on cinemas opening and announced anti-Covid-19 protocols to keep audiences safe.

The South Indian language film industries of Tamil, Telugu, Malayalam, and Kannada (based in Chennai, Hyderabad, Kochi, and Bengaluru, respectively) are now readying to launch their regional language films in cinemas all around the South of India and beyond…

Indian movie superstar Prabhas is back on the big screen and fans are eagerly awaiting to pay homage to him in movie halls again.

This is a romantic film opposite Pooja Hegde and directed by Radha Krishna Kumar. The film started shooting in Georgia in March last year but then stopped abruptly with the onset of the global pandemic. The crew then went to Italy in October to resume filming and the final scenes were shot at the famous Falaknuma Palace in Hyderabad.

The story evolves in Europe in the 1970s with a palm reader played by Prabhas.

A teaser is expected to release online on Valentine’s day (Sunday), ahead of the release date, set for April 28th.

There is huge interest across the country and internationally too – in star Prabhas.

Two instalments played out to packed theatre halls both at home and abroad in 2015 ‘Baahubali: The Beginning’ and then again in in 2017 ‘Baahubali: The Conclusion’, breaking many box office records. The film is a mythological epic that follows the tale behind a revered Prince (Amerandra Baahubali/Mahendra Baahubali) and the young Shivudu, a shepherd – and recounts the story of how this child born to a modest family becomes king and is involved a deadly feud with a rival family and Prince Bhalladeva (Rana Daggubati).

Prabhas and co-stars Anuskha Shetty, Daggubati and Rajamouli himself and composer MM Keeravaani, all came to London for the live orchestra screening at the iconic Royal Albert Home in October 2019 and acv spoke to them ahead of the screening. (See link below)

Much is anticipated of this film – another historical action epic – directed by Koratala Siva, and starring Chiranjeevi and Kajal Aggarwal. Star Ram Charan will also play a role. Shot mostly in Ramoji Film City, in Hyderabad – this is the largest studio facility of its type anywhere in the world. ‘Acharya’ is among the big budget (£15 million) movies of 2020 but has been pushed back now to May 13.

Telugu star Allu Arjun stars in this eagerly anticipated film that was supposed to be released last year – ongoing changes to production schedules pushed the film further back as they had to respond to changes in regional regulations brought about the pandemic.

Directed by Sukumar, who enjoyed great success with ‘Rangasthalam’ (2018) – about a family who have an hearing impairment and decide to stand up to their tryannical village leader – this film pairs Arjun with Rashmika Mandanna – one of the biggest female stars of Telugu cinema.

This appears to be a crime story, involving the trade in red sandalwood and is set in forests in the region.

This is a big budget (£40m) new film directed by SS Rajamouli and features a star cast list of both Bollywood (Hindi) and South Indian stars – among the latter are Ram Charan, Samuthirakani, and Jr NTR (also referred to as NT Rama Rao Jr and grandson of the legendary NT Rama Rao who was both a prolific and successful actor and then later chief minister of the state of Andhra Pradesh), while Ajay Devgn and Alia Bhatt are from the form the Bollywood fraternity involved.

This is a fictional period drama set in the days of the British Raj and the Nizam of Hyderabad (the monarch of the region and widely regarded as among the very richest of India’s many princes) and is about a group of freedom fighters who clash with both.

Morris is reportedly cast opposite Jr NTR in the lead role. He tweeted birthday wishes to Morris recently.

It will be dubbed into many regional Indian languages. The film is scheduled to come out on October 13.

This stars Dhanush – one of the Tamil film industry’s biggest stars and one who made his international debut in ‘The Extraordinary Journey of the Fakir’, adapted from a successful French novel in 2018 (click on the link below for an interview with Dhanush about this film).

The film is directed by Mari Selvaraj and the one-minute teaser dropped at the end of last month (January 31) by the film’s producer, Kalaippuli S Thanu, created a lot interest, notching up millions of views – it depicts hundreds running up a hill and then Dhanush standing on a hilltop in a traditional lungi with a large sword in his hand and is shot in black and white with stirring music.
‘Karnan’ will be in theatres in April.

This is a historical film set in the 16th century, depicting the experiences of Kunjali Marrakar IV, the naval chieftain of the regional ruler, Zamorin of Kozhikode (Calicut) who has to contest with the Portuguese naval fleet and their designs on the coastal state.

It stars some of the biggest names in the South Indian film industry with Malayalam film legend Mohanlal in the title role – and the others are Arjun, Suneil Shetty, and Prabhu. It is directed by one of India’s best known directors, Priyadarshan – who has done Hindi films as well.

A sequel following up on the success of ‘KGF’ – which won many film awards and was a huge popular hit – this is directed by Prashanth Neel and is another mixed contemporary (2018) and period piece (1951). KGF stands for Kolar Gold Fields and yes, it’s a film about gold mining, crime, politics and power and centres around the character played by star Yash.

The trailer (in English) for this second chapter, released last month, has already notched up nearly 170 million views. There is a huge amount of interest in this sequel because it is regarded as putting Kannada cinema on another level.

In this second opus many stars join Yash, such as Bollywood’s Sanjay Dutt, Srinidhi Shetty, Raveena Tandon and Prakash Raj. Being the most expensive Kannada film ever made with a budget of ₹100 crore (£10m), it is now scheduled for a theatrical release on July 16.

Dhanush interview (Cannes 2018) ‘The Extraordinary Journey of the Fakir’ –