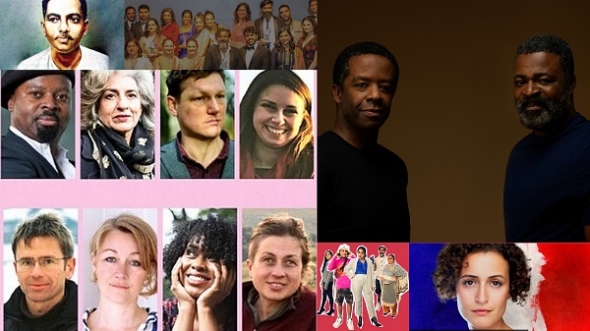 What you might want to catch this week – with three online events tomorrow!

THERE’S a chance to catch the world premiere of a play online tomorrow (February 17) – ‘Hymn’ by award-winning playwright, Lolita Chakrabarti.
The production, mounted by the Almeida Theatre, explores a complex friendship between two men who meet at a funeral.
“Benny (Danny Sapani) is a loner anchored by his wife and children. Gil (Adrian Lester) longs to fulfil his potential. They form a deep bond but as cracks appear in their fragile lives they start to realise that true courage comes in different forms,” states the publicity blurb. It features music as well and is described as “searching, soulful” and “asks what it takes to be a good father, brother or son”.
The play was supposed to have resumed the Islington theatre’s winter season last year following the end of the first lockdown and be produced under Covid regulations in front of an audience – but can now be enjoyed online.
Chakrabarti is best known for two-award winning plays – ‘Life of Pi’ (2019) is her adaptation of the Yann Martel Booker Prize winning novel of the same title and ‘Red Velvet’ (2012) is about the first African-American, Ira Aldridge, to play ‘Othello’ in Britain and to great acclaim in the 19th century. The New-York born Aldridge was married to an Englishwoman and relocated to fulfil his acting ambitions. Chakrabarti’s husband, Lester, played the lead role and the play has proved very popular in the US.
This production is directed by Blanche McIntrye and will run every evening from 8pm tomorrow to Saturday (February 20) with an extra matinee on that day at 3pm.
Tickets are £10
For tickets/info/link (you must book at least one hour before performances begin); https://almeida.co.uk/whats-on/hymn-live-stream/17-feb-2021-20-feb-2021

Writers and actors among those urging climate action

STARTING ON Thursday (February 18) and going live is ‘Letters to the Earth Live: Paperback Book Launch’ featuring award-winning poet and writer Ben Okri (pictured top far left) with other speakers.
Authors from across the world will address the climate emergency and express their hopes, despair, rage and vent questions – as the world has to grapple with the issue in the continuing face of pandemic pressures and COP 26, the United Nations Climate Change Conference, bringing the world together to discuss what action it can take and postponed from last year to November now.
Joining Okri will be Anna Hope, co-founder of the initiative and a novelist; Farhana Yasmin, environmental lawyer and policy advisor; Professor Stefan Rhamstorf, head of earth systems analysis at the Postdam Institute for Climate Impact Research and Mary Annaïse Heglar, co-host of Hot Take podcast and climate justice essayist.
The campaign began two years ago and led to the publication of a book, ‘Letters to the Earth’ which has an introduction by Emma Thompson and is illustrated by Kate Greenaway, a prominent and prize-winning illustrator.
Among those who contributed to the book are musican and campaigner Yoko Ono, actor Mark Rylance, and British Green Party MP Caroline Lucas.
The event is free, but you can register – to get a reminder.
Register/Link: ‘Letters to the Earth Live: Paperback Book Launch’ 6pm-7.30pm GMT, Thursday, February 18. https://www.eventbrite.com/e/letters-to-the-earth-live-paperback-book-launch-tickets-140273404529

Meeting of minds in London?

CULTURE clash and romance are two themes that run through a radio play which broadcasts on BBC Radio 3 this Sunday (February 21).
‘French like Faiza’ is written by Ilana Navaro, a Turkish filmmaker and Sudha Bhuchar, a British actor and writer and Nicolas Jackson.
Faiza travels to London trying to put the past behind her – she feels alienated from her native France as she hails from an Algerian family. In the capital she meets Medhi, a British Pakistani. Sparks fly.
Bhuchar also has plays part in the drama that also features Navin Chowdhry, Sophie Khan Levy, Hussina Raja, and Danny Ashok. The production is directed by produced by Jackson.
More information/link: https://www.bbc.co.uk/programmes/m000shtf

SAUDHA, the Society of Poetry and Indian music, along with other networks committed to poetry, are hosting a two-day Jibanananda Festival online from tomorrow (February 17).
The festival is essentially a celebration of the 20th century Bengali poet Jibanananda Das. There are many who believe he is the heir apparent to the Nobel Literature prize-winner and icon Rabindranath Tagore.
There will also be music and dance with works devoted to interpretations of Jibanananda’s sublime work.
Among the speakers are Jibanananda’s nephew, Jahar Sen Majumdar, and contemporary Bengali language poets and academics.
There are also contributions from non-Bengali speakers with several dotted around the globe, including a group from South America.
Well-known Tagore singer Sanjoy Dey is among those contributing to the musical fare, while Kathak exponents Sangita Chatterjee and Ammera Patankar will separately present dance compositions inspired by the poet.
“Saudha has introduced many revolutionary ideas and new perceptions of arts and music here in the West.
“The Jibanananda festival will not only mark the work of major poet of Bengal but also one of the leading poets of 20th century poetry for a global audience,” said Ahmed Kaysher, director and co-founder of Saudha.
The festival will build on last year’s offering.
You can watch the festival from 3pm-9pm GMT tomorrow (Wednesday, February 17) to 3pm-9pm Thursday, February 18. It will be available from Saudha on Facebook and Youtube.
https://www.facebook.com/events/850610272166047/

THERE’S a chance to see Eastern Eye’s Arts, Culture and Theatre Awards tomorrow (February 17).
It had to rescheduled from Friday (February 19) after a technical issue. Join host Nihal Arthanayake and a wealth of talent from the British arts scence.
You can tune into the awards show from 6pm – you need to register with the link https://actas.co.uk/live/en/page/registration

Comedy sketches to tickle you

RIFCO Theatre has just launched its digital comedy series on Instagram TV and Facebook.
Called ‘Leave the Plastic on’, it’s a series of sketches and centres around Mc Maacho and Prema Patel, pronounced by her as Petal.
“MC Maacho is desperate to represent his culture through music (and boost his Instagram followers) and Prema is in complete denial of her heritage on the cusp of her burgeoning political career,” chimes Rifco about the sketches that first dropped last month.
Written by Pravesh Kumar, artistic director of Watford-based Rifco, Yasmeen Khan (BBC’s ‘Eastenders’), it’s directed by Ameet Chana.
More here (including links to sketches): https://www.rifcotheatre.com/watch/leave-the-plastic-on

Privacy & Cookies: This site uses cookies. By continuing to use this website, you agree to their use.
To find out more, including how to control cookies, see here: Cookie Policy
← JLF London 2022: Anita Rani on being ‘The Right Sort of Girl’ and “brown in a white world and white in a brown world”…
‘The Ministry of Lesbian Affairs’ – a breath of fresh air in theatre exploring representation and visibility… (interview) →