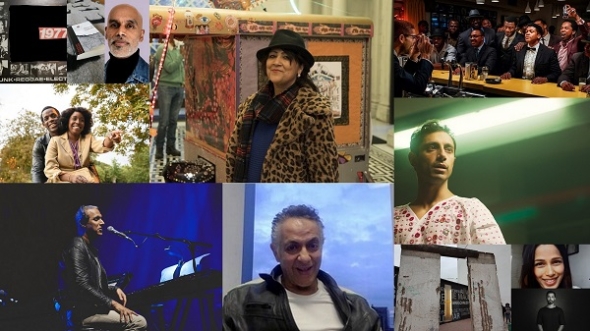 It’s been a strange and challenging year in many ways but many of us did find solace in arts and culture. Here are three writers’ picks of 2020…

ABSORBING and ambitious, it has a lot to say about culture, identity, family, friendship, work and love. Riz Ahmed – who co-wrote this film with friend and US -based debutant narrative feature director Bassam Tariq – has produced a film which will be with us for a long time and is the start of what I hope will be an exciting slate of features from this talented duo.
From us (Interviews & video interviews): http://asianculturevulture.com/?s=Mogul+Mowgli
Online: https://player.bfi.org.uk/rentals/film/watch-mogul-mowgli-2020-online

THIS whole series of five films conceived by Sir Steve McQueen and directed by him seemed like a rightful re-reading of Britain’s cultural history and identity. For too long, we have all been erased. Not any more. Each story was exceptional and ‘Lovers Rock’ and ‘Alex Wheatle’ were my picks – one joyous and romantic, the other inspirational and uplifting. Thank you, Small Axe team and the BBC for finally making it happen.
http://asianculturevulture.com/?s=Small+Axe
On BBC i-player (UK only)

A BRILLIANT ensemble piece, wonderfully arranged by Regina King, who makes the switch from actor to debutant director with skill, and aplomb. The story of one evening between Muhammad Ali, Sam Cooke, Malcolm X and American football player, Jim Brown is electrifying, entertaining, amusing and still hugely relevant for the themes it covers.
http://asianculturevulture.com/portfolios/tiff-2020-one-night-in-miami-inspirational-and-unforgettable-like-the-men-portrayed-in-this-brilliant-film-which-is-a-meditation-on-power-and-how-to-use-it-review
https://www.imdb.com/title/tt10612922

‘Another Kind of Concrete’

KOUSHIK BANERJEA’S debut novel is rich, moving and extremely poignant. Set in 1977 and about a period of social strife and racial tension in Britain, it depicts a Bengali origin family surviving in South London with understanding, intelligence and humour. A beautiful read.
https://asianculturevulture.com/portfolios/another-kind-of-concrete-by-koushik-banerjea-partition-polyester-punk-and-many-kicks-in-this-1970s-british-family-tale/
https://www.jacarandabooksartmusic.co.uk/products/another-kind-of-concrete

A SERIES of different events hosted by the above – all online and during the lockdown. What was impressive was the frequency and variety of these and many racked up thousands of views. A special word for Ahmed Kaysher who is involved in all three organisations – and an inspirational figure!
http://asianculturevulture.com/?s=Ahmed+Kaysher
https://www.facebook.com/groups/254990097923755/

RIZ AHMED’S ability to blend personal memory, colonial history and identity into digestible statements and combine all that with a facility to entertain is exceptional, I believe.
http://asianculturevulture.com/?s=The+Long+Goodbye
https://mif.co.uk/whats-on/the-long-goodbye-livestream-edition/
The Long Goodbye Youtube film https://youtu.be/Lzz50xENH4g

I REALLY enjoyed attending the Berlinale (Berlin Film Festival); Berlin is such an iconic city and I got to visit some famous sights such as The Wall and Checkpoint Charlie. It was fantastic to be there and cover ‘Mogul Mowgli’ and the Indian film, ‘Eeb Allay Ooo!’.
It was very enjoyable actually going to the BFI Southbank for LIFF’s physical edition in September and especially seeing the film, ‘Shut Up Sona’, about music star Sona Monapatra’s journey through MeToo and facing down right-wing keyboard warriors in India. Seeing the film, ‘The Disciple’ at London Film Festival was awesome – writer-director Chaitanye Tamhane perfectly blending the conversation of Guru Shishya (studying under a venerated figure) versus commercialism and the strictures of Indian classical music.
http://asianculturevulture.com/portfolios/london-film-festival-2020-mogul-mowgli-riz-ahmed-this-is-an-unapologetically-brown-film-unapologetically-bold-in-its-creative-vision/
Sona Mohapatra interview about the film https://youtu.be/X5CAThYhR9Y
The Bagri London Indian Film Festival: https://londonindianfilmfestival.co.uk/
Berlinale: https://www.berlinale.de/en/home.html

A STUNNING piece, beautifully rendered, about colonial migration and indentured labour, featuring a bharatanatyam dancer and Dutch Surinam hip hop star Shailesh Bahoran. Sooraj Subramaniam is the Indian classical dancer who is based in Belgium, but grew up in Malaysia and Australia. Both men had grandparents who left India as indentured labourers.
https://www.facebook.com/ShobanaJeyasinghDC/videos/
http://asianculturevulture.com/?s=Material+Men

‘I’VE MASHED UP THE TATE’ perfectly encapsulates what Dr Chila Kumari Singh Burman has done to the façade of one of the country’s most iconic buildings. It’s magical – go see it for yourself!
Interview with artist https://youtu.be/0-RdzfEkdis
http://www.chila-kumari-burman.co.uk/index2.htm

WHAT an achievement and how brilliant it was to talk to Jimmi Harkishin, who plays Dev Ahlahan, the longest serving Asian character in Weatherfield. We’ve seen Dev’s ups and downs now for 20 years and it was great to discuss this all with him.
Interview: https://youtu.be/sG11ku9syfI

THIS was escapist entertainment that helped me to get through the first lockdown. It’s the strongest contemporary representation of Indian women out there – and to my mind, the strongest there has ever been in an Indian drama series. Forget the tired comparisons with ‘Sex and the City’ and perhaps the very first episode – this series has it all!
https://www.amazon.co.uk/Four-More-Shots-Please-Season/dp/B07MVKWKZK

LIFF went digital for the first ever time in its 11-year history and laid down a template for other film festivals to follow. Especially powerful was four very brilliant women filmmakers – Shobana Azmi, Mira Nair, Deepa Mehta, and Freida Pinto, talking about their craft. (For the acv story on Pinto, please click on the picture below).
https://www.loveliffathome.com/

A FABULOUS concert and a real treat to hear Sawhney collaborate with his usual crew, except this time they were all in different locations but played together and it worked perfectly – a real feat!
Nitin Sawhney and friends: https://youtu.be/da9PIMGVw8E

‘I May Destroy You’ on BBC1 from June

SUCH original storytelling and clever writing and unlike anything I’ve ever seen anywhere, let alone on Auntie! Fantastic.
BBC-I player (UK only): https://www.bbc.co.uk/iplayer/episode/m000kyd6/i-may-destroy-you-series-1-11-would-you-like-to-know-the-sex

The Big Flower Fight – Netflix (May)

I LOVED this eight-episode show – it was hugely creative, as 10 teams vied to be the best flower arranging pair on the planet. It was a lot of fun and there was a riot of colour and as someone also interested in crafting, it was right up my street. The winner was quite a surprise too!
Netflix: https://www.netflix.com/gb/title/81046153

Main picture: Just some of the highlights from this year: Clockwise – ‘Another kind of Concrete’ by Kaushik Banerjea; Dr Chila Kumari Singh Burman by her Tuk-Tuk, part of the display at Tate Britain, ‘Remembering A Brave New World’; One Night in Miami; Riz Ahmed in ‘Mogul Mowgli’; Freida Pinto, LIFF Conversation; Berlin Wall; Jimmi Harkishin (‘Coronation Street); Nitin Sawhney at the Royal Albert at Home concert

Privacy & Cookies: This site uses cookies. By continuing to use this website, you agree to their use.
To find out more, including how to control cookies, see here: Cookie Policy
← ZEEJLF at British Library 2019 – Cricket, Queen Victoria, outsiders and Islamic modernism do battle for hearts and minds – who wins? (Day 2 round-up)
Empress India ‘more enduring and pervasive’ – Professor Miles Taylor asserts, as he discusses Queen Victoria role with Shrabani Basu, author of ‘Victoria and Abdul’ tomorrow at ZEE JLF at British Library →