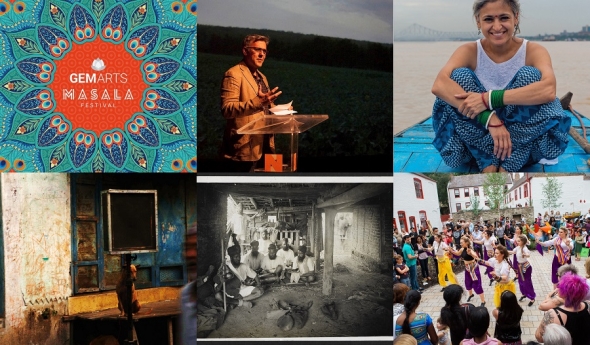 ONE OF THE LARGEST South Asian multi-arts festivals of its kind gets under way today.

Gem Arts’ near week-long Masala Festival was only created last year and won a major regional newspaper award (The Journal) for its category.

This year, it is bigger and has been able to attract an even wider array of artists both from around the surrounding region and much further afield – including artists from India.

There is poetry, theatre, dance and music performances, as well as workshops and activities to engage children and young families. It is a mixture of free and ticketed entry events and spread across a number of venues in the north east.

Vikas Kumar of Gem Arts, who has organised the July Masala Festival

Among the highlighted themes this year are the 70th birth anniversaries of both India and Pakistan, the centenary of the First World, which continued to rage in 1917 before ending the following year and wider (literary) reflections on globalisation, internationalism and migration.

Set around Gateshead and Newcastle, the festival is organised by Gem Arts, a multi-arts organisation set up 17 years ago.

Vikas Kumar, its director who was recently awarded an MBE in the most recent honours list, told www.asianculturevulture.com the latest festival would very much build on the success of the first.

“There’s something for everyone, it’s very much a collaborative programme with many of our partners and venues. It’s an ambitious programme but at the same time we are looking to engage different audiences.”

The festival formally started earlier this morning with introductions and welcomes and an interactive storytelling session for children, inspired by tales from the ‘Punjab and Beyond’ – and continued later with ‘Henna’ – storytelling for adults and teenagers by Peter and Gorg Chand. On hand were the henna artists from Gem Arts itself.

Related to the ‘Sacred Sounds’ concert tonight – Sikhs singing religious chants in a French barn [Le Sart]. A seated group of men of the 15th Sikhs, 24th July 1915; British Library, London, UK; (add.info.: Record of the Indian Army in Europe during the First World War.
Illustrator: Girdwood, H.D
20th century, 24th July 1915
Source/Shelfmark: Photo 24/(70)
Gelatin silver prints.); © British Library Board. All Rights Reserved; PERMISSION REQUIRED FOR NON EDITORIAL USAGE; it is possible that some works by this artist may be protected by third party rights in some territories

Later this evening, there is a concert titled – ‘Sacred Sounds’. It highlights the largely forgotten – until very recently – contributions of soldiers from the subcontinent in the First World War (see adjoining picture caption).

It is a mixture of readings, songs and music and the poetry and images are made by Imtiaz Dharker.

Among the highlights Kumar mentioned (when pushed – ‘it’s all great’) is tomorrow’s evening with celebrated British Asian poet Daljit Nagra.

He presents his third collection of poetry ‘British Museum’ and is in conversation later with Dr Neelam Srivastava, senior lecturer in post-colonial literature at Newcastle University.

Kumar said: “It’s about the quality of artists we bring and how we can develop long-term with a mixture of different collaborators. We are working with internationally recognised artists as well as emerging and upcoming and local artists.

Away from more traditional art forms, the Masala Festival will see former BBC ‘Great British Bake Off’ semi-finalist Chetna Makan talk about her new book, ‘Chai, Chaat & Chutney’ as well as present a cooking demonstration. It takes place at lunchtime tomorrow. There are also other food strands involving local restaurants.

The main concert tomorrow evening will be the Gandharva Choir – all the way from Delhi. The singers specialise in classical, devotional and folk styles. It is the first time they are playing the in the north east of England. (It is a free event – check listings below for further details).

There’s also an opportunity to see Siddharth Bose’s latest hard-hitting play, ‘No Dogs, No Indians’ on Wednesday and Thursday (July 21) with a post-show discussion after its first staging. It is a work part commissioned by Gem Arts.

“There is a whole British Asian cast in that,” pointed out Kumar.

There is also a film strand with rights activist and arts producer Bobby Tiwana curating ‘Changes: Stories on the Edge’ for Friday (July 21). These are short films focusing on personal and political conflicts and looking at themes from a South Asian perspective. The festival also screens the recent ‘Jungle Book’ and the rather older but iconic, ‘Gandhi’ – both on Saturday.

The festival closes with a grand finale at the Live Garden, Live Theatre, Broad Chare in Newcastle on Sunday (July 23) from 11am-3pm.

There will be dance performances, arts & crafts and children’s activities.

Kumar concluded: “We’re looking to build the festival and develop it further – by bringing more artists to it, spreading geographically, perhaps, and doing more work with outreach and bringing in more partners.”

For full listings and further details of all events, check the online brochure here: https://gemartsuk.files.wordpress.com/2017/06/gemarts-masala-festival-17-final.pdf

All images courtesy of Gem Arts