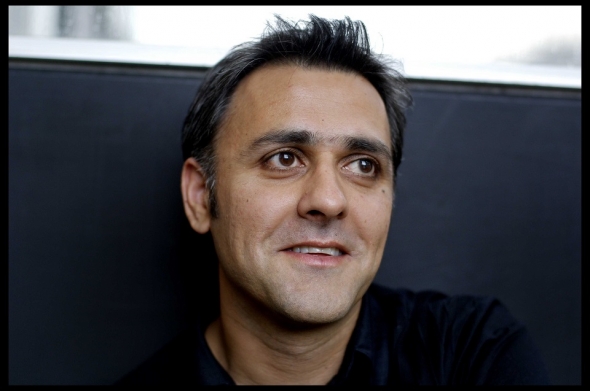 HAVING a patchy school record and coming from a virtually illiterate British Punjabi working-class background has been no impediment to poet Daljit Nagra scaling the very highest peaks of the country’s literary establishment.

On Thursday (October 24), his latest book, ‘Ramayana: A Retelling’, was named among the shortlist of 10 for one of the country’s most prestigious accolades, the TS Eliot prize. The winner will be announced in January.

During a series of public events, with one on Monday (October 28) at the British Library and part of the South Asian Literature Festival (#SALF2013) and another on Tuesday (October 29) to mark the 60th anniversary of the Poetry Library in the Royal Festival Hall, Nagra will talk about the ideas and motivations for writing his Ramayana: A Retelling.

“It took a couple of years – one year full-time,” he told www.asianculturevulture.com speaking to us in person from a Costa coffee shop near his Harrow, north London home. “It was a really big thing for me, I wanted to explore the language in a big way, use American English, Australian English, Hobson-Jobson (a 19th century dictionary  of English used in the Empire) words ; I wanted  a broader challenge.

“I want to be a global writer and have a sense of global English. Linguistically what interests me is the music of a poem, that is what stirs my imagination and trying to find a broad palate of language.”

It looks like the world of poetry has responded to his latest endeavour and the nomination for the 2013 TS Eliot Prize, which received more than 100 nominations from publishers, indicates the breath of his achievement.

The story of Lord Ram is deeply ingrained in Indian and Hindu culture, but the actual 3rd century BCE tale of Ram, Sita and Ravanna has travelled far and wide and there have been many, many different versions right across Asia and there are also Sikh, Buddhist and Jain interpretations.

“I thought The Ramayana would be a simple story like that – good and evil, but while I was researching it I discovered the South Indian version, which is very different – Ravana is a hero,” said Nagra.

Without delineating the differences, the classical and best known Ramayana is a play of good against evil and the battle between the good King Ram and the scheming treachery of the demon king, Ravana, who kidnaps the virtuous wife of Ram, Sita, and imprisons her.

There are many sub-plots, twists and turns, and Ram does eventually recapture his wife, but there are further complications and issues.

His return to his ancient kingdom with his wife and the slaying of Ravana is celebrated as Diwali (on November 3 this year), and Nagra’s version closes with the couple being reunited.

His earliest encounters with the story were as a young boy listening to his grandmother, parents and a neighbour in his West Drayton, west London home.

“It’s an oral story. There was a dad next door and he had a BA in English from India, and he spoke differently from my parents, he was just more fluent – being an educated man.

“My mother is illiterate but my Dad could read a bit and from my earliest memories I was aware of Ram and Sita, and the victory over a demon and the parables of being good, working hard, having morals and duties.”

From a Sikh background, Nagra was also inspired by the last of the ten gurus, Guru Gobind Singh, (1675-1708) who had penned a version of The Ramayana.

“In the Granth (the Sikh holy book), there is a version of it, which was very important to me because he wrote it as a clarion call, at a time when the Sikhs were being oppressed by the Mughals, and you get a sense of  an  oppressed underclass and there are many oppressed people in the world,” said the one-time English school teacher.

It’s clear that Nagra wants to convey ideas about truth and justice through his retelling, but it is also an important act of positioning.

He is in a sense bringing a story which has a deep resonance in much of Asia to a western audience, and making it relevant and engaging to us in another continent and culture, though he might see it a little  differently.

“There are lots of parallels with The Iliad and merchants (in Asia) have been exchanging these stories (about The Ramayana) for 2,000 years, so for me, I don’t feel they are eastern stories, they are common stories,” said the 46-year-old father of three.

While poetry and such tales are among the highest points of our intellectual, spiritual and literary quests, Nagra is very easy to talk to and wears both his deep reading and learning very lightly.

Perhaps that is not so surprising when his earliest cultural references are probably of a very different order to some of his fellow poets shortlisted for the TS Eliot prize and these provided some of the inspiration behind his own Ramayana.

“I wanted to claim something of value from my background: fireworks during Diwali, Saturday Bollywood matinees at the Dominion Theatre (in Southall), essentially Indian things.”

These sorts of reference points permeate much of his work from his first widely praised poetry collection, Look We Having Coming to Dover (2007) and published by Faber & Faber, through to his second, Tippoo Sultan’s Incredible White-Man-Eating Tiger Toy-Machine!!! (2011).

While the first dealt with the voice of Asian migration to Britain; the second is more about the negotiations, accommodations and legacy of Empire.

“Early on I was writing about Asians in the first person, rather than describing them in a tourist board way, which I felt Asian poets had done.

“I wanted to present them in all their glory and madness, which is true of all cultures and we are a mix, aren’t we?”

Nagra mentioned mortality when discussing his Ramayana, and wanting to pass something onto his mixed race children, who are just five and three.

He has dealt with big ideas in that book, as part of a larger quest for understanding and questioning.

“Part of (writing) it was to understand the way my ancestors were living and connect with that; and where do villages get their rules and ideas? The Ramayana offered lots of insights.”

A subject from The Ramayana that often exercises commentators is the rather uncomfortable idea that Sita has to prove her virtue to her husband when she is rescued.

Nagra said his parents would side with Ram the king, who is also under pressure from his subjects, to know about their queen’s propriety following her abduction, but he would have a different more ‘western’ stance.

“I am caught in between the two, if he doesn’t do what’s right by society, he will lose his power,” Nagra explained.

But it is these sort of issues that make the Ramayana and its many readings such a rich text.

Nagra only started writing in his late 20s; his school on a council estate, was not academic, and he only entered higher education following evening classes and A levels, going to university when he was 21, not 18, as is customary.

After completing a Masters, he became a school teacher and continues to mentor part-time in a local north London secondary modern school.

He started getting published in poetry magazines before his first book collection was accepted within a year and a half of submission.

Rather cheeringly, he does not have the swagger of celebrated a poet, who won the South Bank Decibel Prize in 2008 and the Forward Prize for Best First Collection in 2007.

“It all feels very surreal, I don’t really believe it still, I doubt everything I write, I am waiting for it to be rubbished, and rejected by Faber and brought back to my West Drayton roots.”

Not a chance of it – his next subject? The Mahabharata…