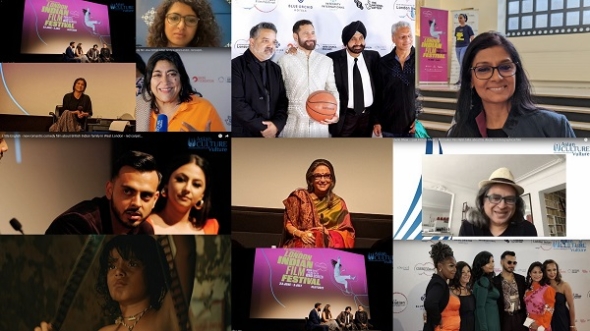 ONE MAN’S UNIQUE story of success and triumph was a fitting way to bring the 11-day London Indian Film Festival (Liff) to a close.

‘Superfan: The Nav Bhatia story’ both thrilled, delighted and moved many as it brought the curtain down on the festival which started last month.

Our video shows Bhatia talking about his journey from India to Canada and how he made a success of his life there – from penniless immigrant to becoming a millionaire car dealership owner.

His love affair with the game of basketball is rather more recent and only took off really when the Canadian city of Toronto created a new franchise team to participate in the NBA, the globe’s biggest and most prestigious basketball competition, covering North America in 1995.

As Bhatia says in our video (and at the BFI Southbank in the post screening Q&A) – he fell in love with the Toronto Raptors quicker than he fell in love with his wife! Awww. His daughter, Tia, is an influencer and has taken her father’s message of hope, optimism and dignity to yet greater heights.

Audiences in Birmingham and Manchester responded enthusiastically, and it will be interesting to see how his story resonates with others as it becomes better known.

The Nav Bhatia story is just beginning its journey in Europe and it is why we made two videos with him – the first was a pre-screening interview with Bhatia at home and our last and final video covers what was the London Indian Film Festival (liff) closing gala. He has important things to say about communities getting out of their comfort zones and integrating – and he too has faced discrimination and exclusion (see the Milwaukee Bucks fan incident which is covered in the documentary).

Elsewhere, there was much buzz near the end of the festival for veteran Indian director Aparna Sen, who came with her controversial film, ‘The Rapist’. It got a UK premiere and Sen talked about her long career in a Liff talk at the BFI.

Suman Bhuchar, associate acv editor, explores what the veteran director said about her craft and offers a very positive assessment of her courageous film, ‘The Rapist’. (This story is here)

Her daughter, Konkona Sen Sharma, a well-known actor mostly in the independent sector, also appeared at her own Liff talk in the second week of the fest. We covered it on Instagram – it is here.

Also given the acv Instagram report treatment was Taapsee Pannu (here), the Bollywood star, who was here for the world premiere of her film, ‘Dobaaraa’, along with director Anurag Kashyayp, at the BFI Southbank, and which opened the festival on June 23.

We reviewed the film – a sci-fi thriller that is entertaining and rather romantic. Kashyap’s enfant terrible reputation will need to be re-assessed…

More seriously, it was a good opening but the Pannu discussion on Day 3 was rather sparsely attended – she deserved a bigger audience and was worthy of it, talking about her work, lifestyle and moving into producing alongside acting. Her performance in ‘Dobaaraa‘ is great and she made yet more friends here and the talk showed that she is one of the most reflective and intelligent actors working in Bollywood today. She spoke to us on the red carpet at the opening – (see links below for other interviews that night).

Perhaps the scheduling – it started at 8.30pm at the Cine Lumiere (South Kensington) as a single offering on a Saturday night (June 25) didn’t really help.

Of our Youtube videos, we kicked off coverage with that rare thing – a new British Asian film, ‘Little English’.

There was huge energy and excitement around this – despite the micro-budget, the film proved a big hit with audiences in London, Birmingham and Manchester.

Much credit goes to writer-director Pravesh Kumar who talked to us about its making (here) .

It’s very much watch this space as the Liff screening was a world premiere and just beginning its film journey.

There were also interviews with filmmaker Pan Nalin, ahead of the Liff screening of his ‘Chhello Show’ or ‘Last Picture Show’.

It is set for a Navratri/Diwali release in India and being a Gujarati film it will do well in its homeland.

It was announced this week (July 12) that Nalin’s film had won the Audience Award at Liff this year. His film which is autobiographical and about his own falling in love with cinema as an eight year old boy is a worthy winner and he told Liff he found the award, “truly inspiring, uplifting and enlightening!”.

He spoke at a BFI talk after the film’s UK premiere and discussed its making and journey to date.

We had seen the film at its world premiere (remotely) at Tribeca last year and were hugely impressed and it is why we wanted to talk to him before its UK premiere.

Nalin has sold the film to several territories to be shown on the big screen ahead of any deal with streamers.

We also got a chance to talk personally to filmmaker and actor Nandita Das in a one-to-one. Recovered from covid earlier a couple of weeks earlier, she is looking forward to finishing off her latest film.

As yet, it is untitled but stars Kapil Sharma, a well-known chat show host and comedian in India and Shahana Goswami, whose last notable appearance in a UK context was in Mira Nair’s BBC TV drama, ‘A Suitable Boy’.

Sharma plays a food delivery driver in Bhubaneswar, Oriya State and is involved with Goswami romantically – but Das didn’t specify the precise relationship. She didn’t tell acv a lot about what happens – the film is currently in post-production and being readied for showing.

“I wanted to look at ordinary people, the gig economy, unemployment – and people who were so important to us during the lockdown, they’ve gone back to being anonymous,” she told us prior to her Liff talk at the Cine Lumiere.

Das told us she is likely to put it forward to an international film festival – depending also on what her producers want, but she didn’t specify which festival.

Considering her long association with Cannes (twice on juries) and the fact that ‘Manto’ had its world premiere there in 2018, don’t be surprised if it heads there in May 2023. As you may know we covered that particular ourney with ‘Manto’ in 2015 (See here).

There was a screening too for ‘Ladies Only’ which premiered earlier this year at the Berlinale.
A documentary which sees filmmaker Rebana Liz John go into Ladies Only compartments on suburban commuter trains in Mumbai and ask the women there what they are thinking about, yields particularly rich and powerful insights into the lives of women residing and commuting in the metropolis.

Comments about patriarchy, pleasure and power offer a different perspective from that sometimes represented in popular culture in India or through a western gaze.

Shot in black and white and part of John’s Cologne-based filmmaking Master’s course, the filmmaker told acv’s Tatiana Rosenstein: “They the women (speaking to the camera in the film) don’t see themselves as victims.

“One of them says you need to know what gives you pleasure to find your way in life.” Mmm, very wise.

We also have a page on four short films that featured in the festival, see here.

This year’s short film was won by filmmakers – Ritviq Joshi and Hardik Sadhwani for ‘Jagraan’. It got a big screen showing at the BFI and brought the curtain down on films at the festival on Sunday (July 3), screening after the closing gala film. The award-winning short is a quirky tale about a rickshaw drivers’ family who decide a life of crime is the only way to beat their blues.