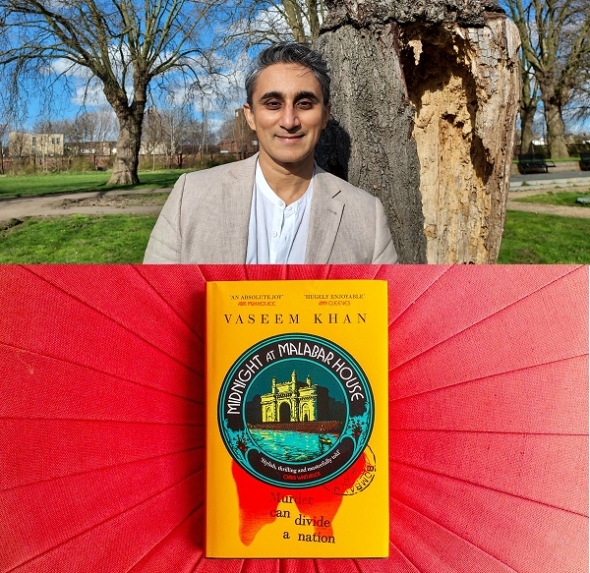 Up for one of the UK’s most prestigious crime novel prizes tomorrow, author Vaseem Khan takes us on a journey that saw him go from aspiring novelist to Mumbai and then onto becoming one of the country’s most successful crime writers with a debut series revolving around a detective and a baby elephant…

CRIME FICTION novelist Vaseem Khan has been shortlisted for the Theakston Old Peculiar Crime Novel of the Year for the first book in his new Malabar House series ‘Midnight at Malabar House‘, with the awards taking place on Thursday (July 21) at the Old Swan Hotel in Harrogate, Yorkshire.

www.asianculturevulture.com caught up with Khan about how he felt to be shortlisted for this top accolade alongside Elly Griffiths, ‘The Night Hawks‘; Joseph Knox for ‘True Crime Story‘; Laura Shepherd Robinson, ‘Daughters of Night‘; Mick Herron, ‘Slough House‘; and Will Dean, ‘The Last Thing to Burn‘.

“I spent 23 years trying to get published, and there were seven different novels that were rejected by agents so when I was finally published, that in itself was an enormous relief,” said Khan. “To now find myself eight years later being shortlisted for one of the world’s biggest awards for crime fiction, it’s not just a great honour and humbling, but just wonderful to be named alongside all these other famous writers who have won it or been shortlisted in the past.”

“It’s a vindication that the lifetime I spent trying to make myself a better writer hasn’t been wasted.”

London-born Khan studied Accounting and Finance at the London School of Economics (LSE) and Political Science, before moving to Bombay as a management consultant for building eco hotels, but moved back to England in 2006 when his mother became ill.

“I sent it to agents and of course told my parents I’m going to be a rich and famous writer and not go to university. You can imagine what Asian parents thought about that.

“There was a small problem with my cunning plan, which was that the book was rubbish,” he joked.

When he returned from India, he wrote the Baby Ganesh Detective Agency Series about the modern India he had experienced for the last ten years, including the stark contrast between rags and riches, the slums and mansions of the wealthy across the road from each other.

That first book – ‘The Unexpected Inheritance of Inspector Chopra’, which included that baby elephant – published in 2015, propelled him into the front ranks of successful crime writers. It has been translated into 15 languages. In 2018 Eastern Eye newpspaper presented him with an Arts, Culture and Theatre Award (Acta) for Literature.

“I wanted to write a book that showcases this incredible modern India, this changing environment. That became ‘The Unexpected Inheritance of Inspector Chopra‘”.

Khan explores many further complex issues in ‘Midnight at Malabar House‘, including misogyny within patriarchal institutions such as the police force and post colonialist India, both environments in which Wadia does not fit.

During Partition, “A million Indians died”, he explained. “Muslims and Hindus and Sikhs were at each others’ throats as they moved between these newly defined borders”.

He continued: “It’s a very turbulent environment, and one of the things I thought would be intriguing is to have a protagonist who doesn’t automatically slot into that environment. Because India at the time was very patriarchal and to be frank, in many institutions it was very misogynistic.”

Women in 1950s India were still very much stereotyped under the Mother India trope of being housewives, or “domestic goddesses” as Khan called them, and they did not have a place in male dominated organisations.

Khan told acv that his decision to place a female police officer in a male dominated police force was to present a character with far more difficulties than a man would have faced.

“As a writer, you want to create characters that are intriguing, but also characters who are faced with challenges and difficulties”, he explained.

“Reading about these Indian female pioneers gave me an idea of what kind of person and character I wanted to create with Persis. I also happen to have an Indian female police officer as a friend, but she’s from a modern era.”

Misogyny within patriarchal India in the 1950s is still with us today, and Khan expressed his views on this.

“I’m sad to say that some of the rather backwards thinking that constrains Persis in my novel back in 1950, unfortunately is still prevalent in the modern era in certain institutions in India, including the police service I’m afraid.”

He went on: “Great strides have been made but there’s still a long way to go”.

Archie Blackfinch is Persis’ English sidekick and serves as a representation of the English people Khan knows, and their views on India, as compared to Persis, an Indian who has lived and participated in the Independence movement.

“He’s a very deliberate creation. What I’m trying to do with these books is to give the perspective of someone like an Archie Blackfinch, who is to a great extent based on English people I know and what they think about India.”

Khan mentioned the difficulties Wadia faces when she has to work with Blackfinch because, as a white Englishman, he represents 300 years of colonialism in India, which is negatively viewed by Indians. “Now here she is, forced to work with an Englishman in a post-colonial environment.”

Writing crime, for Khan, is a way of focusing on aspects of society that one does not agree with, whilst also creating a mystery that challenges readers.

“Crime fiction is amazing, because it allows you to stick up a lens to any aspect of society that happens to be troubling you but that at the same time allows you to do so while creating an intriguing narrative, a mystery that challenges readers.”

He goes on to explain that he uses crime as a platform for expressing his views on wider issues.

“It allows me to frame that crime story within the context of an era which I’m really intrigued by and which I believe has not been explored very much in fiction.

“There’s no crime fiction set in 1950s India, so for me that was another reason to try and bring that era to life.”

The second book in the Malabar House series is ‘The Dying Day‘, which follows Wadia as she tries to uncover the thief of an ancient copy of Dante’s ‘The Divine Comedy‘ is out now.

Khan is working on the third book in the series called ‘The Lost Man in Bombay‘, which will be released this Autumn, and takes place in the Himalayas, where the body of a white man is found.

The winner of the Theakston Old Peculiar Crime Novel of the Year will be announced at the opening event of the the four-day Theakston Crime Writing Festival in Harrogate, starting tomorrow (July 21).

Privacy & Cookies: This site uses cookies. By continuing to use this website, you agree to their use.
To find out more, including how to control cookies, see here: Cookie Policy
← ‘The Funeral Director’ (review) – on the edge and the boundaries of faith, culture and sexuality
‘Layla and Majnun’ – Grand and iconic ‘dance opera’ production of Asia’s ‘Romeo and Juliet’ premieres in the UK… →