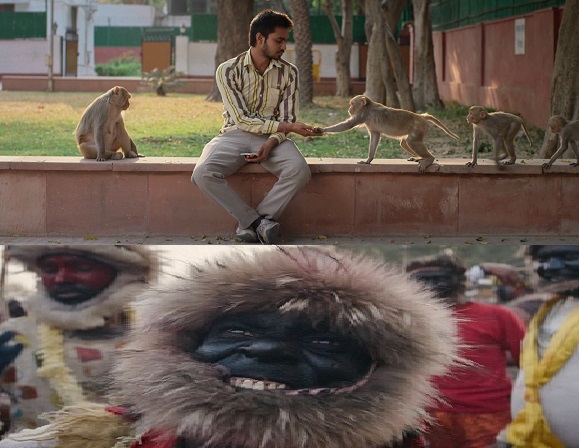 ONE OF INDIA’S sought after independent filmmakers, Prateek Vats, whose engaging satire, ‘Eeb Allay Ooo!’ is about to enjoy a premiere at the We Are One Global Film Festival (see here for our short preview) and audiences are in for a treat.

‘Eeb Allay Ooo!’ tells the story of a young migrant labourer, ‘Anjani’ (Shardul Bharadwaj), who is engaged to keep the monkeys away from the imposing Lutyen’s government buildings of the capital city, Delhi.

But, he cannot harm the animals because they are considered sacred according to religious beliefs, and as such are a protected species.

The tale centres around the premise that langur monkeys – the traditional enemies of the rhesus monkeys – were once used to scare the smaller monkeys from these buildings.

However, animal rights protests led to this practice being stopped and so humans now have to ape (excuse!) the langurs in order to keep the macaque monkeys away from the Parliament buildings.

The film received the prestigious Golden Gateway award, along with Young Critics Choice award and Best Actor Male for its lead performer at the 21st Jio Mumbai Film Festival in October 2019 and it is this festival team which has curated the selection at the We Are One – A Global Film Festival. The other films in the festival are Arun Karthick’s ‘Nasir’ (feature), Shaan Vyas’ ‘Natkhat’ (short) and Atul Mongia’s ‘Awake’ (short). (See links below).

Vats was at the Berlinale (the Berlin Film Festival) with his writer, Shubham (only known by one name), actor, Naina Sareen (pictured below with Vats and with Suman Bhuchar) , and producer (Shwetaabh Singh) at the Panorama screening at Zoo Palast in Berlin.

ACV was also at the Berlinale and we caught up with this soft-spoken director and asked what prompted him to pen this story.

The title is intriguing but is explained early on.

“The film was a response to the nonsensical political situation which is unfolding in our country,” explained Vats.

The film is brave in that it uses satire to criticise contemporary politics in India, but did he find it easy to use humour in this manner?

“It is this inherent absurdity of our Government,” he argued. “India is the largest democracy in the world wanting to employ contractual labour to scare away monkeys and that too by almost dehumanising the person involved. You have to imitate an aggressive ape to scare away other apes, so I kept thinking what kind of a conundrum is this? How does one succeed in a job like this?

“It’s a Sisyphean task you can’t really keep the monkeys away without taking hard decisions, and you can’t take those hard decisions because it’s a scared animal and that for me in a nutshell is what India is in right now – we do not know how to deal with our religiosity.

“It is coupled with militarisation, it is coupled with aggression, violence and all those things are serious. As an artist I would always want to confront these with humour and satire has been a perfect thing.”

Through the story of an ordinary individual, the story critiques the political system and the writer, Shubham uses irony to great effect.

Vats and Shubham came across the story of Mahinder Nath, a real-life monkey wrangler in a news article and wanted to put his story in the context of a new social reality that was unfolding in the country – nationalism versus religion.

“We are interested in the symbols of a nation, words like ‘anti-national’ are being heard every day in the country,” Vats told acv in Berlin.

As a group of artists and young Indians they wanted to explore how religion and nation can co-exist in a secular democracy, and the ensemble of creative talent amassed for this film from director, writer, cinematographer, sound designer, producer, lead cast are all alumni of the Film and Television Institute of India, Pune (FTII).

The film has been shot in a very naturalistic style by cinematographer, Saumyanda Sahi with sound design by Bigyna Bhushan Dahal and uses documentary style verité footage with crafted mises en scène to create the claustrophobic, noisy intensity of a busy metropolis.

The writer and director spend a lot of time with Nath – who plays a version of himself in the film (also called ‘Mahinder’) – to learn the monkey rules, time tables and how monkeys move from area to area, in order to give the film its nuance and authenticity.

The film deals also head on with the issue migration – of people moving in India from their rural, village locales to big cities such as Delhi, Mumbai, and Kolkata, to name just three. The current Covid-19 crisis has meant many migrant labourers being forced to return to ‘home’.

“Most of our group (of filmmakers) are second generation migrants to cities and that’s why these stories come very naturally because growing up as a teenager it’s a very violent thing.

“Violent, in the sense that it is not a physical violence – but you have a world inside the house and a completely different kind of environment outside it and you are always trying to fit in. You’re trying to move away from saying, ‘ok, I am from a smaller province. No, no I am as cool as people from Delhi or Mumbai’.”

Vats, whose family is from Bihar, was born and brought up in Delhi and studied at Delhi University before doing a Master’s in film direction at FTII, Pune.

He made a documentary, ‘A Very Old Man With Enormous Wings’, in 2017 – which is a portrait of former Mr Universe 1952, Manohar Aich, and filmed in 2015 when the bodybuilder was 104, at his home in Kolkata, (Aich passed away a year later); and the documentary also won a National Film Award.

In Berlin, it was clear that Vats is concerned about the direction India was heading – as riots and protests grew over controversial legislation regarding religion, identity, citizenship and heritage.

“Any kind of singular identity is really flawed, if anybody coming from India wants to say ‘this is India and this is not Indian’, I do not believe in that.

“The whole idea of a place like India is the diversity of it. We have thrived on it. I stand opposed to this idea of a singular Indian identity. This film is our response to the nonsensical world what is going on,” he explained.

Other Indian films screening at We are One global film festival

For full listings and futher details, please see We Are One (May 29-June 7) http://www.weareoneglobalfestival.com/

Look out tomorrow (May 30) for our latest Bollywood asianculturevulturevibes with our Mumbai correspondent!

Privacy & Cookies: This site uses cookies. By continuing to use this website, you agree to their use.
To find out more, including how to control cookies, see here: Cookie Policy
← A compelling voice – singer Sona Mohapatra on MeToo, the Indian music industry and calling people out – all in new documentary
Venice 2020: Director Ivan Ayr on ‘Meel Patthar’ (‘Milestone’) and the lonely road of Indian truck drivers through the eyes of poets ‘Ghalib’ and ‘Pash’ →