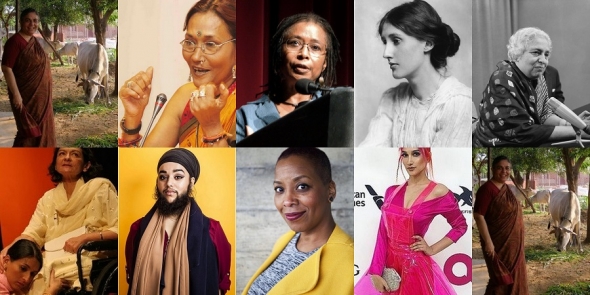 WITH today being UN International Women’s day, we thought we’d celebrate some special women – outside of dear family and friends.

So here are three women of note by acv’s Suman Bhuchar, Momtaz-Begum-Hossain and the token male, Sailesh Ram.

Gaylene Gould
Now head of cinema and events at the BFI Southbank, she’s an admirable and formidable woman who has written about arts, culture and diversity. She coined the phrase ‘cultural neglect’ which explains what artists of colour – who have been making work in Britain for years feel about being excluded from the mainstream conversation. She is able to put into words what artists of colour have to do to constantly justify their existence.
http://www.gaylenegould.com/

Shelley King
An actress and trailblazer who has been acting for over 40 years from her first appearance as nurse, ‘Jay Harper’ in the BBC soap, ‘Angels’ to currently playing ‘Yasmin Nazir’ in ‘Coronation Street’.
She has appeared in many of Tara Arts’ plays and she is an advocate for Kali theatre and is committed to bringing women’s voices to the mainstream.
http://www.shelleykingactress.com/biography/

Vandana Shiva
Writer, environmental activist and eco-feminist, she has worked in the field of challenging corporate agricultural policies. She has supported ordinary women and farmers helping to create sustainable agriculture and organic produce.
A tireless advocate, campaigning to protect the intellectual property rights in Indian rice, rejecting patenting on seeds, and arguing for bio-diversity and indigenous knowledge to be at the forefront of many farming initiatives, she is a woman of incredible energy and poise.
http://vandanashiva.com/

Harnaam Kaur
Known to many as ‘The Bearded Dame’ I heard Harnaam give a talk last year and it was the first time I heard about the Body Positivity movement that exists on social media. She gave one of the most polished and passionate speeches I’ve ever heard and I was touched by everything she said. She is a genuine role model for now and many years to come.

Haven’t seen myself in a while Sometimes it’s hard to wake up. I can feel my face fold when I smile Tired hands put on my make up. Just a method actress playing on my mattress, Remembering what I know. Just another day for me to try and practice, Being your freak show. I’m mad and I’m sad, Too quiet too loud. Scandalous and not scared, I’m bad and I’m proud. I’m mad and I’m sad, I said it aloud! Sacred and not afraid, I’m bad and I’m proud! White man’s lust never paid my rent, Another day, another dad. Now it’s time to repent, I’m the best you’ve ever had! This is my skin light-filled brown and I’m not sorry, Baby, all I did was sit. You don’t know if you want to fuck me or destroy me, I’ll be your freak show for a bit! @workinhardmummy

Sukki Singapora
Not a day goes by when I’m not in awe of what this mixed race international burlesque performer is getting up to. I admire her originality, style and flair, but I’m also inspired by the way she is constantly challenging and breaking stereotypes. She keeps focused on her vision in an industry that is incredibly challenging, I’d love a dose of her spirit to keep me on track with my own goals.
http://asianculturevulture.com/portfolios/sukki-singapora-art-burlesque/
http://www.sukkisingapora.com/

A trailblazing Bangladeshi creative, Bibi was the country’s first supermodel who worked with major brands in the 1970s. Then in 1994 she launched a fashion label which today employs 35,000 weavers in rural Bangladesh, giving them employment away from the garment industry. As an appreciator of handicrafts, it’s great to see true Bengali heritage crafts continue to be important thanks to her championing it.
https://www.facebook.com/bibirusselluk/

Alice Walker
Unquestionably one of the most brilliant women of our age, her life is unending quest for dignity, justice and freedom from oppression. She gave a voice to a people who had none and turned it into great art. She was the first black woman to win the Pulitzer Prize for Fiction in 1983 for ‘The Color Purple’ and it will continue to be a landmark work that asks questions of all us.
http://alicewalkersgarden.com/

Virginia Woolf
To me, she was the first modern feminist and a writer of distinction and immense talent. It is a shame that her life was blighted my mental illness – partly exacerbated no doubt by the narrow-mindedness and ignorance that surrounded her. She was a shimmering light at a time when the world was becoming increasingly dark and closing in on itself. She was a thinker and a philosopher and a woman who never stopped being curious about our world or the people around her.

Vijaya Lakshmi Pandit
A political colossus in her time, and India’s first ambassador to Russia, then the US, she also served as the first president of the United Nation’s General Assembly in 1953. She was also India’s high commissioner to Britain for a time. A woman who had a strong commitment to justice and fairness, she might have been Jawaharlal Nehru’s (India’s first ever post Independence PM) sister, but was widely recognised as her own woman. At the time, few Indian women went anywhere near politics, but fiercely intelligent and unperturbed by convention, she carved a quite brilliant path.