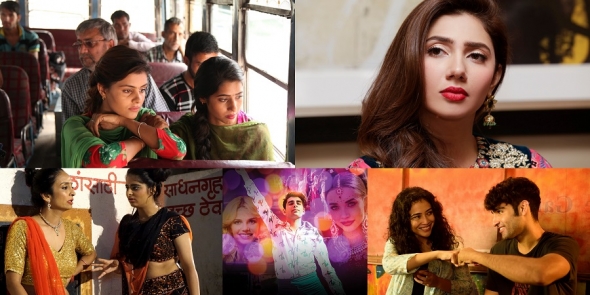 It’s the second consecutive year the festival has hit Leicester…

MANY of the stars attending the UK Asian Film Festival will be heading to Leicester too – as well as being in London.

Pakistani and Bollywood film star Mahira Khan will be walking the red carpet next week to inaugurate the festival in the town.

She will be in conversation with BBC Asian Network afternoon favourite Noreen Khan on Thursday, March 15. It’s only the second year (of 20 as Tongues on Fire) that the festival has a Leicester edition.

This year the whole festival turns the spotlight on the role of women throughout the film industry and seeks also to promote them and nurture new talent.

All the films in the festival are F-rated, meaning they have a significant number of women involved in the production – or the subject of the film promotes equality and good practice. An F-rated certificate is recognised by IMDB.com – the largest database of film information anywhere.

For the opening in Leicester, Mahira Khan will discuss her phenomenal career to date; she became Pakistan’s first L’Oreal Paris representative last year and her appearance as a rape victim fighting for justice in the Pakistani film ‘Verna’ caused some to pause in their assessment of this one-time glamour girl of Pakistani film and TV.

She wowed both the public and critics alike, and looked set to charm India, until the politics of India-Pakistan international relations intervened and put an abrupt stop to contributions from actors across each other’s frontiers.

The ‘In Conversation’ with Mahira Khan and Noreen Khan at the Phoenix Cinema promises to be one of the many highlights of the fest’s considerable and myriad offerings in Leicester.

A rare gem from Kashmir enjoys a festival opening gala premiere at Phoenix next Sunday (March 19).

Director Rahat Kazmi* has been gathering plaudits since his powerful and unflinching ‘Mantostaan’ screened at the festival last year; he now returns with a film about his troubled homeland – Kashmir.

But ‘Side A and Side B’ is a humorous and satirical take on the troubles and looks at 1993, when cinema and TV in the region was banned and created an unlikely underground movement united in its belief in the power of moving images. Kazmi and members of the cast will attend a post-screening Q&A.

Another shining light – Onir – makes his UK Asian Film Festival debut. Best known for his ‘My Brother…Nikhil’ (2005) which dealt with the sensitive subject of AIDS and the plight of those suffering in Goa, it established the director as a powerful and dissenting voice.

His latest film ‘Kuchh Bheee Alfaaz’ hits The Phoenix on Monday (March 19) and there will be a Q&A about this film, which examines modern relationships. His anthology work, ‘I am’ also screens at the festival on the Friday before (March 16) at Montfort University and will be followed by a Q&A with Dr Monia Acciari from the university.

Sanjay Suri, the acclaimed star of ‘My Brother…Nikhil’ presents his latest work, ‘My Birthday Song’ a psychological thriller, it explores the real and the imaginary and blurs the lines between past, present and future. Suri will attend a post-screening Q&A on Wednesday, March 21.

Also screening at the festival in Leicester is ‘Tikli and Laxmi Bomb’, set in a red-light district of Mumbai and featuring two women who set about a revolution and turn their whole world upside down. Made by a near 100 per cent female crew, the film is directed by a man – Aditya Kripalani – from whose best-selling novel the film is adapted. He wanted to make the film as women-orientated as possible and negate the ‘male gaze’.

Also in Leicester is ‘Ajji’ on March 23 and the closing gala premiere is ‘Boogie Man’ on Friday, March 30 at the Phoenix Cinema.

Featuring ‘Supergirl’, Bollywood and south Indian film star, Amy Jackson and JLS band frontman Aston Merrygold, many of the cast and director Andrew Morahan will be in attendance and there will be a special 1970s DJ set in the Phoenix, celebrating the film’s time period.

The festival in Leicester is being produced by Tongues on Fire in association with Phizzical, Phoenix Cinema and Art Centre and De Montfort University.

Samir Bhamra, artistic producer, said: “What excites me about curating and bringing these incredible films, directors and actors to Leicester is to show that there is a cinema loving audience outside of London who want to see, speak to, and learn more about cinema: the journeys of the talented filmmakers, how they find inspirational stories that stimulate and grow our understanding of people and the world, and nurture our own young talent.”

Dr Pushpinder Chowdhry MBE, festival founding director, commented: “This year, marking the 20th year of the UK Asian Film Festival in London and the second celebration in Leicester, we are returning to our roots with a focus on a female led programme with a F-Rated perspective to our films and events. Championing women in film, the F-rating is designed to support and promote women and redress the imbalance in the film industry.”

Dr Monia Acciari from De Montfort University, said: “By connecting with the tradition of the festival highlighting women-centric issues, the idea is to showcase renewed F-rated films and expose the position of invisible women in South Asia, who are often closeted due to social injustices.

“De Montfort University and the CATH Research Centre – international hub for cinema and television research – is proud to partner with Tongues on Fire, Phizzical and Phoenix Art Centre for the second year to celebrate the power of cinema in inspiring societal change.”