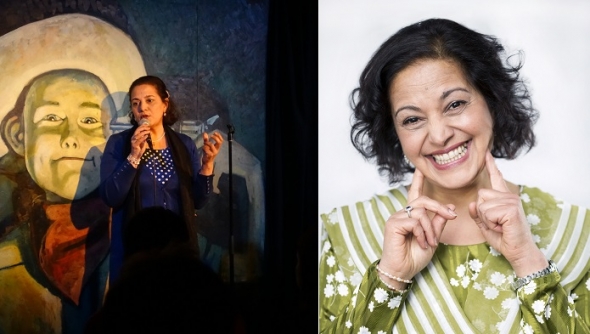 Identity, Ellen DeGeneres, Glasgow Vs Edinburgh, this comedian’s got it all going on…

LUBNA KERR is a funny woman.

No, that kind of slightly strange off the wall.

Oh, no. She’s perfectly coherent and reasonable when www.asianculturevulture.com spoke to her about her upcoming appearances at the Glasgow International Comedy Festival (March 14-March 31).

She has three appearances, all in different guises with the first couple of gigs coming up on Saturday (March 16) and perhaps the most high profile one on March 29.

A stand-up with a growing following, she’s sometimes still a pharmacist, but her comedy is beginning to take her places.

In her native Scotland she has just appeared on a list of ‘60 funny Scots’ (a list compiled by newspaper, The Herald) and is best known for her stand-up show, ‘Where are you really from?’ which she will be delivering at the fest on March 29.

Now, most of us brown folks in the UK, have had this question posed to us, at some time or another.

And many will retort, ‘London’ or another large city in which we grew up – or in a way that is a particular favourite, ‘England’.

Often that leads to the same question being repeated, ‘No, where you really from?’

“I get it all the time,” said Kerr in her broad Scottish brogue. “I was born in Pakistan, grew up in Glasgow and now live in Edinburgh. There’s a real divide.”

It isn’t what you’re thinking – probably because in Scotland, the question has a dimension we would miss down South, as it were.

“There is a real divide between Glasgow and Edinburgh – people want to make sure I am not from Glasgow, they don’t care that I am from Pakistan.”

“It’s all a bit complicated.”

It can of course make for rich comedy and it goes further.

“They also want to know if you are rich or poor, or whether you went to private school or not,” Kerr explained when people talk about Edinburgh.

The show actually originated from her very first moments of stand-up back in 2013.

Her mother had just died and learning about comedy was a way of diverting her grief and doing something she had wanted to for a while.

“I was doing a comedy course and I thought it was just writing comedy, I didn’t realise there was a stand-up part.

“I picked up the stand and the microphone broke, and people started laughing and then my mind went blank, and someone said: ‘Say the first thing that comes into your mind’. I said: ‘You know I am Pakistani’ and everybody started laughing. I thought what the hell is funny about that?”

She’s come a long way since then and also has a parallel acting career – appearing in the popular ‘Still Game’ stage show, a feature film called, ‘Moon Dogs’ and BBC1’s ‘Scots Squad’.

Her shows are quite varied – while ‘Where are you from?’ is personal and about her Asian identity and upbringing, she also does another show called ‘The Asian Ellen DeGeneres’.

This one-time stand-up is now one of the US’ most prominent talk show hosts and while Kerr takes personal inspiration from DeGeneres’ own professional journey, it allows Kerr to play a character and ask funny and impertinent questions, if she feels the inclination.

“I get to dress up and it’s not scripted,” tittered Kerr.

She has her two guests lined up and expects more of an Asian audience for that – the word ‘Asian’ in the title pulls them in.

It’s scheduled for March 22 but her very first appearance at the festival is in the afternoon of March 16 where she joins three other (ethnic) comics for ‘Women of Colour Comedy’ at Glasgow Women’s Library.

Later that evening, she is at ‘Funny Lassies’ in a line-up of you’ve guessed it, Scottish women comics.

“It’s a not a one-size fits all,” she explained. “You’ve got to be versatile and attract different audiences.

“With many Asian (older) women, it has to be clean and you do jokes that relate to them and that are culturally appropriate.”

Kerr is actually a bit older than she looks from her pictures – she has three grown-up adult children of which the youngest is 23.

“They’re very supportive and come to my shows sometimes,” she said.

She has broken through into the professional circuit by doing open mics as you have to in the beginning and making the most of the courses available to her. She credits Strathclyde University and its lifelong learning courses, both for stand-up and acting that have helped her progress.

“My profile is growing and I’ve got a lot of gigs this year,” she excitedly told acv. “People don’t think we (Asians) are funny but we are.

“I grew up watching a lot of comedy shows on TV and watching Pakistani and Indian films.

“I had a Punjabi father and an Urdu-speaking mother and we used to have to watch both Punjabi and Urdu films and there was so much humour.”

Where are you from?

Privacy & Cookies: This site uses cookies. By continuing to use this website, you agree to their use.
To find out more, including how to control cookies, see here: Cookie Policy
← Cannes Film Festival 2018: Deepika Padukone, Bollywood star talks about her return to the Riviera, global stardom and the troubled ‘Padmaavat’
Cannes Film Festival 2018 reviews: ‘BlacKkKlansman’, ‘Rafiki’, ‘The Image Book’, and ‘3 faces’ →