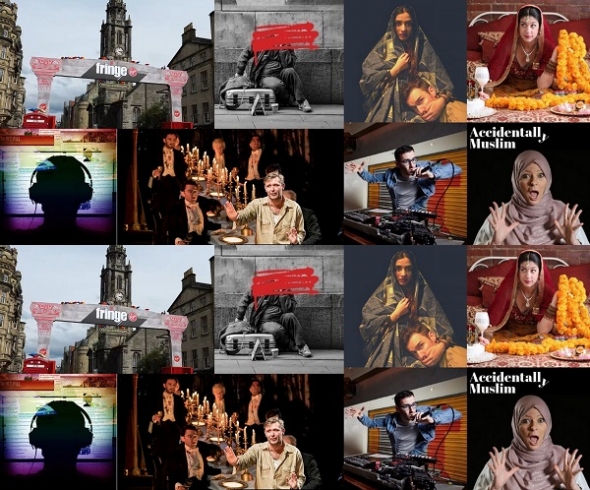 So many shows? So little time, we have some suggestions…

IT’S THAT time of year when many creatives in Britain (and some beyond) head towards Edinburgh to take a check on the creative pulse and see something that entertains, thrills, and stimulates.
Yes, the Edinburgh Fringe Festival got under way on Friday (August 2) officially and we’ve split our preview into three sections…
*First up is theatre and we’ve picked these shows (other choices are available of course)… They are not in any particular order but are those with a strong South Asian or alternative angle to them…(and the last is something that we recommend having seen the production in London).

First came to the Edinburgh Fringe in 2017 and scooped the prestigious Scotsman Fringe First Award – there was a BBC4 screening of this drama earlier this year and this is another opportunity to see an immersive show, which is part of the British Council Edinburgh showcase. This will undoubtedly be one of the hot tickets in town. Alipoor says he “makes theatre with and for communities that don’t usually engage in the arts”.
This particular play is about how extremists of all shades exploit the vulnerable, trade in fantasises and pump fake news to lull people into their ways of thinking. Riveting.
‘Rich Kids: A History of Shopping Malls in Tehran’ – Javaad Alipoor and Home in association with Traverse Theatre Company, Assembly George Square Studios, George Square EH8 9LH August 7-24 (selected days and times) 70 mins
Inequality, technology, the politics of consumption, young people, mobile phones – it’s a heady mixture even without Alipoor’s discerning eye.
https://tickets.edfringe.com/whats-on/believers-are-but-brothers
https://tickets.edfringe.com/whats-on/rich-kids-a-history-of-shopping-malls-in-tehran

‘Shlomo’s Beatbox Adventure for kids’ by Nebula Productions, Underbelly, Bristo Square, Teviot Place EH8 9AG August 7-18 (check listings for days and times) 45mins.
‘SK Shlomo: Surrender’ by Nebula Productions, Underbelly, 66 Cowgate EH1 1JX (August 7-11 & 13-23) 10.10pm (60 mins)
Shlomo is a powerhouse on the beatbox scene and charmed listeners to the Radio 4 ‘Loose Ends’ programme when he appeared on it May this year. He talked about his grandma and the Iraqi scene where she entertained in London. One track is about belly-dancing.
He has two shows – one for kids in the daytime and in the night, he premieres his new one-man theatre show, ‘Surrender’; the Ed Sheeran pop star collaborator talks depression, looping and beatboxing like only he can in a candid tête-à-tête, but made to be shared. Powerful https://tickets.edfringe.com/whats-on/shlomo-s-beatbox-adventure-for-kids
https://tickets.edfringe.com/whats-on/sk-shlomo-surrender

‘Bismallah – an Isis tragicomedy’ by Wound Up Theatre August 6-25, Underbelly, 66 Cowgate, EH1 1JX 6.40pm August 7-11 & 13-25 6.40pm (60mins).
Two men, Dean and Danny. Both choose a life as soldiers and end up in an Iraqi basement. A successful nationwide tour, a run at the Pleasance Theatre and sell out Vault Festival 2018 outing make this another very popular show. It is also the recipient of the Amnesty International Freedom of Expression Award. Lively.
http://www.underbellyedinburgh.co.uk/whats-on/bismillah-an-isis-tragicomedy

‘The Djinns of Eidgah’ by Bread Theatre and Film Company, University of Cambridge,, Sweet Grassmarket, Apex Grassmarket Hotel, EH1 2HS August 7-10 & August 12-18; 4.15pm (90 mins) This newly formed company put on one of the most prescient pieces of theatre you could find. Kashmir is back in the headlines as India tries to quell the troubles with a change in the region’s status. Written by Abhishek Majumdar who spoke earlier this year to acv about his most recent, ‘Pah-La’ about Tibet, this is a play about the tragedy of war and conflict and how scarring it is on the human soul and it doesn’t duck the politics. Unwavering.
https://tickets.edfringe.com/whats-on/djinns-of-eidgah

‘The Happiness Project’, by Creative Electric, Army at the Fringe in association with Summerhall, 89 East Claremont Street EH7 4HU August 9-11, & August 16-18 and August 23-25 (2.20pm) 50 mins
In our digital age, how important is contact of the non-physical and intimate variety…? “Performed by a diverse, inclusive cast and places queer, working-class and disabled people’s stories’ centre stage”. Inspirational.
https://tickets.edfringe.com/whats-on/happiness-project

‘Om Shaadhi Om’, by Nina Chhibber Williams, at Greenside, 6 Infirmary Street, EH1 1LT August 7-10 (12.40pm) 50 mins.
The perennial question for many Asian singles. Nina has it sussed or does she? “A multi-cultural, mixed up and unfinished journey to matrimony” – is life that straightforward?
https://tickets.edfringe.com/whats-on/om-shaadi-om

‘BBC High Tide Radio Plays’, Assembly Roxy, 2 Roxborough Place EH8 9SU August 13 Only. 11.30am (90 mins)
Among the writers whose work you can hear is Vinay Patel and Tallulah Brown. Patel’s ‘The Shores’ tells human history as it is and complements Brown’s ‘Silver Darlings’. Edgy.
https://tickets.edfringe.com/whats-on/bbc-and-hightide-radio-plays

And finally not something that is the fringe, but the actual Edinburgh International Festival and from the National Theatre in London…

Pictures: Courtesy of artists and https://tickets.edfringe.com/