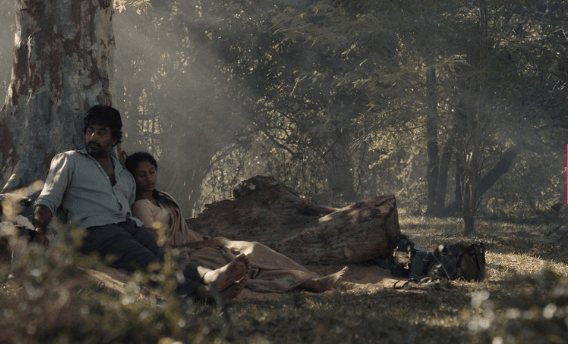 IMPRESSIVE first-feature filmmaker Suba Sivakumaran told www.asianculturevulture.com she wants people to watch her film, ‘House of My Fathers’, about the Sri Lankan civil war “without thinking about which side they belong to”.

The film screens for the last time at the BFI London Film Festival (LFF) later this afternoon (see listing below).

Constructed as a ‘fairy tale’ and about two neighbouring villages – one Sinhala, one Tamil, and where woman are unable to conceive on both sides – it sees a Tamil woman and Sinhala man brought together specially in a forest for this purpose.

A mysterious doctor figure helps them and is critical to overcoming suspicions and disbelief, and the film chronicles the plight of the trio. It is set in contemporary times but has a beautiful, other worldly atmosphere about it.

What happens forms the core of the film, and told as allegory about the conflict, it explores deep emotions and violence – much of it internal.

Sivarkumaran, who is of Tamil origin, and now lives in London, after growing up mostly in Australia, told acv: “I haven’t shown anything in the film where someone does something to someone else. I am not interested in who did what.”

Her film works on a far more ephemeral and deeper level – and asks essential questions about the nature of identity and humanity.

At the first LFF screening Q&A, she expanded on the idea of myth and fable and said it plays a significant part in how you should view ‘House of My Fathers’.

She paid credit to her team – editor Nse Asuquo and sound designer Phil Lee were at the BFI along with her and the soundscape adds another layer to the film’s eeriness and sense of foreboding.

“It’s like a fairy tale and I want people to watch the film without thinking which side they belong to,” she explained to acv at a BFI LFF director’s tea earlier this week. “All those identifying details are removed.”

What you are left with is just a Sinhala man and Tamil woman and a doctor there to make sure the ‘plan’ works.

It is set in a Sri Lanka forest among actual war ruins and there is both a beauty and terror about the environment.

Sivarkumaran’s father is Hindu, while her mother in Christian and she was inspired by religious stories – though the film is quite spare in dialogue and the character’s beliefs are not vastly exposed.

“I grew up with the Ramayana myth. I love the idea of being sent to the forest where many thinks happen. In Christianity, Jesus lives in the wilderness for 40 days.”

What is indicated is subtle and sophisticated and that is what makes ‘House of My Fathers’ an original and intelligent commentary on conflict and violence in Sri Lanka.

Her lead actress – Pradeepa is a non-professional and took a bit of persuading, she revealed.

“She is a producer in Hollywood and originally she wanted to produce the movie. I’d been casting for a long time and I didn’t find the right actress – she had the right face for the role.”

There was a lot of training and workshopping and Sivakumaran had two veterans in the male leads – Bimal Jayakodi (Sinhala man) and Steve De La Zilwa (doctor) are both well-known and well-established actors in Sri Lanka.

She raised the money to make the film, ploughing her own savings and calling on friends and family.

The film has been acquired by Asian Shadows, a Chinese company and ‘House of My Fathers’ enjoyed its world premiere at the Busan International Film Festival in South Korea a few days before hitting LFF.

Sivarkumaran came to London to study and is an aid worker and has been in the capital for nine years now.

“This feels like a home-town screening and I’ve been an aid worker in Sri Lanka itself, so I have both the insider and outsider perspective.

She continues to work in the aid sector.

“I’ve worked with Tamil refugees and asylum seekers, so this story feels close to home.”

She is hoping to make her next film in London and about three generations of refugees living in the capital.

House of My FathersSuba Sivakumaran