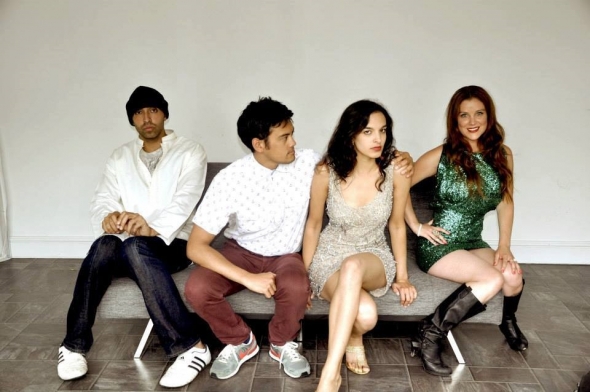 THREE women each expressing their own creativity and keen to impress in their own way are in the same town and at the same event and the world is about to judge them.

Yes, that event is the Edinburgh Fringe Festival, and a dance director, a comedian and a playwright are all staging new work that begins there this week (from August 12).

Perhaps of the three who talked to www.asianculturevulture.com, Priya Shrikumar, the artistic director of Dance Ihaymi (I am here), is the most established. Her Scottish-based company celebrates its 10th anniversary at the festival with an outdoor performance of ‘Blue Lotus: Summer’.

Ishi-Khan Jackson is a funny woman. Possibly, yes, quite literally and rightly so. She makes her Edinburgh debut with what she describes as, a ‘one woman comedy cabaret’, titled ‘I am Happy’.

Playwright Nazish Khan makes her professional debut in Edinburgh with the staging of ‘Pole Factor’, a play about celebrity, the role of the media and personal obsession, with a mixed race cast and a Muslim woman character called Coco at the centre of it all.

While Shrikumar whose company has been at fringe over the years, Khan-Jackson and Nazish, hope that their Edinburgh debuts will lead them to the next level. ‘Pole Factor’ opens on August 12, Khan-Jackson plays two dates from August 16 and Blue Lotus plays three days until August 18.

“We thought if we could do Edinburgh we could do it anywhere,” said Nazish Khan. “We will cut our teeth here and take the knocks and the bruises as we go along.”

There’s a buzz in the town about the play and it’s not difficult to see why – Nazish has assembled some great themes and knitted them together with deep, powerful personal currents running through her four character’s lives.

At the centre of it is Coco, beautiful, sexy, hungry for fame and the darling of the media, even more so when she takes an anti-mosque position and distances herself from her Muslim background.

She’s a contestant in ‘Pole Factor’, and yes, there’s real pole dancing in the play.

Nazish is smart and courageous in that respect.

This play, from Nazish’s description of it, makes a point of subverting stereotypes and challenging assumptions and is more nuanced than on first appearances.

“We’ve got a very mixed cast and we plan to bring it to London. I wanted an Asian girl to play Coco,” said Nazish, explaining how Coco was cast.

Coco is played by Nastasha Atherton, whose actual surname is Shah, and she is from an Indian background and when the topic comes up, Nazish mentions the word, ‘backlash’.

“She (Natasha) can always say I am just doing as I am told.”

Nazish, who graduated from a City University stage writing course as a mature student, has set up a theatre company with fellow scribe and director Sophie Foster called Angry Bairds, which aims to do challenging work. Foster also has a production at Edinburgh, titled, ‘Project Lolita’.

Former law student and lawyer Nazish has created believable characters all fighting their own demons  under the added pressure of the media spotlight.

“It tied together my interests and it was sparked by the experience of Jade Goody in Big Brother and how the media demonised her over the racism towards Shilpa Shetty and then almost canonised her after she got diagnosed with cancer – it fascinated me how the media changed.

“Pole Factor’s got comedic moments and has a political undertone, but at the same time it is a story and I do like the idea of mixing up stories with some political thread running through them.”

Alongside Coco, are her boyfriend, Max, his old college friend, Hanif, who has served time and has just come out of prison and Sam, another thrusting wannabe (pictured above).

Watch Nazish Khan, she could well be a name to look out for if her plays live up to themes she has in them.

Ishi-Khan Jackson is possibly the only Asian woman comedian in Edinburgh this year and this is despite at least half a dozen men trying their luck there (see ‘Asian invasion – don’t worry, it’s only Edinburgh’ www.asianculturevulture.com/portfolios/asian-invasion-dont-worry-its-only-edinburgh/ )

The enigmatically titled show, ‘I am Happy’, fits Ishi’s character perfectly. When we first talk over the phone, she is startled by a ‘bumblebee doing a poo’ in front of her. We hope this wasn’t what the bee made of our conversation.

Leicestershire based and armed with an engineering degree, it’s hard to be straight and serious with Ishi, especially when she says she attended the ‘university of happiness’ and has a degree in loveology’ (whatever that is!??!).

Above the chuckles, she’s very warm and sweet, and you can’t help feeling she puts people at ease when she’s on the stage.

“The aim of the show is for people to come out feeling happier than when they first came in. There’s a lot of fun and silliness, I use props, do some gags, there’s a narrative and story telling and some slapstick. It starts with a Bollywood dance, I love Bollywood.”

She stumbled into comedy after attending a course for comedians, not really conscious it was for aspiring professional stand-ups (or she says), got the bug and discovered she wanted to do more than just hang out with funny people.

Setting up comedy nights locally to nurture and support professionals like herself, she developed, ‘I am Happy’ and has taken it on the road with some success.

Underneath it all is her experience of growing up in Zambia, where there were as many as 70 children in a class.

“It’s about my personal journey from Zambia to the UK. I think happiness is a choice – there’s a lot that can get you down. My aim is to spread happiness.”

How did she get from being an engineer to a one-woman entertainment centre?

“Everyone has a confidence in themselves and it is just about bringing it out and it comes out when you find the thing that comes from your heart and your passion and your calling.”

You heard it here first.

Priya Shrikumar is the artistic director of Dance Ihayami, a dance company well known for its Indian productions, north of the border.

‘Blue Lotus’ is a new performance piece that mixes Indian classical dance with something that is more contemporary and creative. It even contains movements from Kalaripayattu  – a martial art first developed in Kerala, India, many centuries ago.

“It’s quite different,” Priya explains to us. “the music is different, it’s more accessible and the movements are very strong, and rhythmic. Usually the structure of basic Indian classical dance is very strict – here, we are exploring a variation to that.”

Eight dancers, made up of a different collection of nationalities, and including the troupe’s only male performer, will present the hour long piece at the city’s Botanic Gardens (weather permitting of course).

The music specially composed by classical fusion specialist Ash Madni draws a lot from his own experience growing up in India and is also inspired by the sense of summer as a season.

It’s been a long journey for Priya, who arrived in Edinburgh as a landscape architecture student more than 20 years ago.

“It was difficult setting up the company. When I first came here I thought I should do dance like I did in India, that is every day and all day. When the college asked me what time I wanted to book a class to teach, I said: ‘All day’. They said ‘what are you talking about?’

“There was no knowledge of Indian dance then, it was an education for me too, I had to make people unlearn the things that knew and learn something about India other than about curry and colours.”