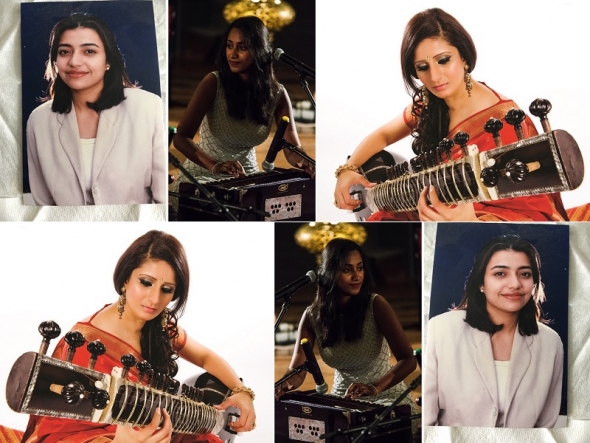 IN WHAT could well be a first – nearly 50 British-born artists will perform Indian classical music at a new three-day festival in London, starting tomorrow (Friday, April 6).

‘Easter Ragas’ is the brainchild of music promoter Jay Visvadeva and the long-established UK organisation he founded to promote Indian classical music, Sama Arts Network.
Inspired by the 50th anniversary of the Beatles’ trip to India, he has brought together musicians from different traditions and repertoires – and a few headline acts from India – to perform with a view to introducing people to these musical forms for the first time.
The performances will all take place at Tara Arts theatre in Earlsfield, South London.

In a special Q&A with www.asianculturevulture.com Visvadeva outlined his vision for ‘Eastern Ragas’ and talked about its inspirations and some of the performers.

www.asianculturevulture.com (Acv): Why is the Beatles’ trip to India 50 years ago so pivotal to your conception of this festival?

Jay Visvadeva (JV): The Beatles’ trip to India transformed the perception of Indian music in the West. Their historic meeting with Pandit Ravi Shankar was a watershed moment, as was the time they spent in Rishikesh with Maharishi Mahesh Yogi. They went to study transcendental meditation in a remote ashram by the sacred River Ganges. It was a very creative period many of the Beatles’ iconic anthems and songs emerged from that time – ‘Dear Prudence’, ‘Revolution’, ‘Blackbird’, ‘Back in the USSR’, ‘Across the Universe’, ‘Mother Nature’s Son’ and ‘Child of Nature’ (reworked as ‘Jealous Guy’) and ‘Imagine’. Many of these went onto feature in ‘The White Album’ (November 1968).
Between 1968-70, more sitars were sold in the West than India itself.

ACV: Three days is quite ambitious, why did you want to do this?

JV: The three-day spread was to achieve an artistic balance of different genres. We have 50 artists divided into 12 sessions, including five double bill concerts.
There is a really exciting mix of British and Indian musicians. It starts with Roopa Panesar and is followed by Sufi Qawwali performer Abi Sampa, best known for her appearance on BBC’s ‘The Voice’. Picking out just a few highlights, there’s also khyal vocalist Deepa Karnad, incredible vocal percussion by Konnakol and Carnatic singer Vamshikrishna Vishnudas, and the Punjabi sounds of Amrit Kaur Lohia and ghazal poetry singer Mehtab Malhotra.
We have a percussion ensemble led by Shahbaz Hussain on the tabla, featuring several drums from across the subcontinent and a rare bowed instrument, the tar-shehnai, played by Kirpal Singh Panesar. We also have Khyal maestro Vijay Rajput in a solo performance. The festival closes with sarod maestro Arnab Chakrabarty with renowned tabla master Pandit Yogesh Samsi followed by the two world renowned dhrupad singers from India, the Gundecha Brothers.

ACV: Is there a particular musical theme or tradition?

JV: There is no single theme as such for the festival, it is a celebration of cross cultural exchanges in all its splendour.
All the vocal genres are represented, including Dhrupad, which is one of the most ancient. Khyal is the name of a vocal genre from India, it literally means ‘imagination’ and when it is sung, what you hear is the intricate beauty of the musical patterns the singers create. There is the mystic tradition of Qawwali, and Ghazals, an art form which combines words, music and poetry. The Tanjore Quartet are among the leading exponents of the vocal Carnatic (South Indian) tradition and we have an equally rare percussion ensemble, known as Taal Vadya Kacheri which is an amalgamation of both North and South Indian drums. There are a full range of instruments too to hear – sitar, sarod, sarangi, dilruba, and tar shennai – all can be heard.

ACV: How would you describe the music to someone who has no sense of Indian classical music but is intrigued or curious?

JV: They have to come with an open mind. There is a way of listening to Indian classical music – just close your eyes and switch off.

ACV: It is quite rare to have so many British or British based classical artists in a festival, was that a very conscious decision?

JV: Yes, apart from Pandit Yogesh Samsi and the three Gundecha Brothers, the rest of the 47 artists were either born in the UK or are based here and have a family heritage from the sub-continent. I have been watching the performers over many years and have seen them grow in stature.
Many have adapted their styles according to their age group, combining a strong understanding of the tradition but expressing their art with a sense of modernity and innovation – it is what makes the UK Indian classical music scene very exciting and the festival is really looking to showcase that.
Roopa Panesar, Abi Sampa, Amrit Loha, Mehtab Malhotra and Deepa Hattangady Karnad are all British artists who are young and making a real name for themselves.

ACV: Any particular reason for Tara Arts as the venue?

JV: It is an award-winning and intimate space. Indian music has always been performed in soirees (in sort of saloon type gathering), and this is chamber music so to speak. The closeness of the audience to the performers make it special and almost unique in that sense – it has to be experienced to be understood, I feel! There will also be food included in the price – it so will have a warm, homely atmosphere, everyone is very welcome!

The festival is supported by the Cockayne Foundation.

Refreshments will be served and are included in the ticket price
For full bookings and listings, please see ‘Easter Ragas’
https://www.tara-arts.com/whats-on/ancestral-voices