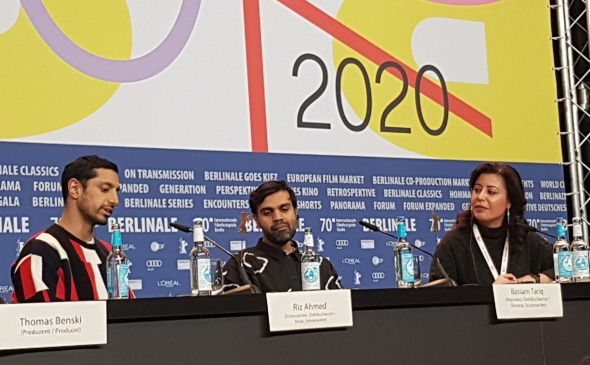 AHEAD of tonight’s world premiere of the film, ‘Mogul Mowgli’, star Riz Ahmed proclaimed it was an “unapologetic brown film” that showcased new and established talent to the world.

He also talked about it re-shaping the narrative in the west around Islam, saying the film was colourful and musical and expressed the spiritual and deep family bonds rarely portrayed – or positively portrayed – on film in the West.

He touched on his developing idea of being ‘dumped by Britain’ and paid tribute to debutant narrative feature director and co-writer Bassam Tariq.

Ahmed and Tariq wrote the film script together and it charts the story of ‘Zed’ (played by Ahmed) a British-born rapper who is about to enjoy international success when he is struck down by an auto-immune disease and forced to return to the family home. Here, his past comes to haunt him.

Ahmed explained that the story came about “organically” and the pair had bonded over mutual interests and perspectives and spent time with each other’s family.

Tariq said that he had been hugely impressed by Ahmed’s music – especially in the wake of 9/11 and Ahmed’s track at the time and they had connected over work also as filmmakers.

They went to Pakistan together and began talking about the things that seemed urgent in their lives, such as work and family.

The story, Ahmed said, was both of theirs, but declared that he was “wearing his heart on his sleeve, putting his personal concerns and DNA (out there).

“The story wouldn’t be so bold if we had written this alone, we were both pushing each other,” he told members of the press gathered in Berlin.

They called producer Thomas Benski on Christmas Day and told him they wanted to visit Pakistan to film an idea they had – and he agreed, giving them the space to make what they wanted.

During press questions, Ahmed said there is a selfishness about Zed.

“He defines his self-worth through his ambition. The question always is, am I enough without the possibility of a legacy?”

Ahmed was asked if he found it easier to play musicians – in his last film, ‘The Sound of Metal’, he plays a heavy metal drummer who loses his hearing.

He responded: “In ‘The Sound of Metal’ I didn’t know how to play the drums but for this film, I sing the raps I have written myself – they are my own songs and some of them will be out later.

“On a fundamental level they are songs about self-worth, about family, romance, who were are.

“The use of music is a cinematic language in this film that is ground in reality.”

He later said that some of the songs in ‘Mogul Mowgli’ will form part of ‘The Long Goodbye’ – a break up album about being ‘dumped’ by Britain and which will also form part of a live musical stage show to be premiered in Manchester (and New York) next month and part of Manchester International Festival’s pre-event programme (ahead of a new venue opening next year for MIF).

Ahmed felt this film was personal and by extension, ‘political’.

He said citing the feminist slogan, “The personal is the political”, and that artists of colour like himself were always asked questions about news events and so forth, but not much about the artistic process or how they came to construct their own stories as artists.

“We don’t get asked about prose style,” he lamented.

Saying the film was unapologetically brown, Ahmed added: “We are presenting a cast of actors who will be in your faces” and name checked the talent, saying “Nabhaan Rizwan, a rapper and actor, Anjana Vasan, a stage actor, Hussain Manawar, spoken word artist, Sudha Bhuchar, founder of Tamasha, a cornerstone of British Asian art and we are presenting that talent to the world! ” Absolutely.