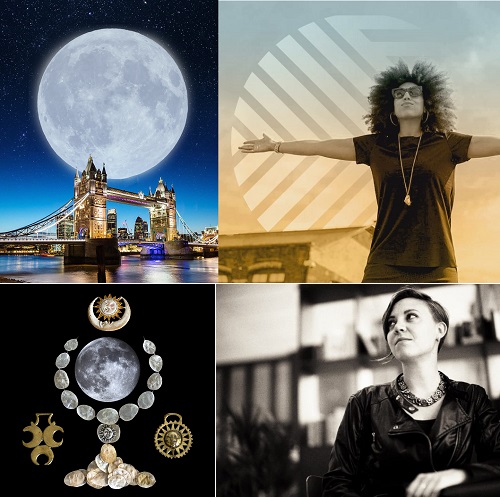 SUMMER festival season is in full swing with the current warm spell enticing us to go outside to enjoy the fun and frolics, but there’s one festival that doesn’t get doing until sundown – the inaugural Moon Festival.

This week marks the 50th anniversary of the Apollo 11 mission that saw Neil Armstrong and Buzz Aldrin become the first humans to land on the moon, and to mark it the nation’s very first Moon Festival is taking place in the Royal London Borough of Greenwich.

The idea comes from festival director Livia Filotico who has a long-standing fascination with the moon. She’s used the lunar satellite as the inspiration to create an arts, culture and well-being event, which mostly occurs during moonlight hours.

www.asianculturevulture.com caught up with Filotico to find out more about this intriguing astronomical themed event.

She began by telling us why she believes the moon is so significant in all of our lives: “Throughout history nothing has brought people together, irrespective of their religion, culture and background like the moon has.

“It’s part of the history of people around the world and everyone has a connection to it. So I knew I wanted to create an event that focussed on the moon, but I didn’t have a clue how to do it.’

Her naivety didn’t stop Filotico from pursuing her plans and she got to work finding partners, starting with writing a letter to Greenwich Council.

She told us: “It wasn’t even addressed to anyone, just an ‘info’ email address, but I emailed and explained my ideas and someone actually replied. I then met with the events team and they loved the idea.

“With their backing I was able to get further assistance and support from partners like The Arts Council and National Lottery funding. I chose Greenwich because it’s an area that has such a history with the moon including the moon being responsible for tides, and of course the River Thames is all around.

“Then there’s The Royal Observatory and National Maritime Museum, making Greenwich the perfect setting. But what I hadn’t realised was just how diverse the borough is. I knew I wanted the festival to appeal to everyone, so my next step was getting the community involved in the decision making and that’s how the programme was developed.”

The celestial celebrations get underway on Friday, July 19, a day before the 50th anniversary (of the actual Apollo 11 landing) with a Moon Street Party from 6pm-10.30pm, but is doesn’t stop there: after all, the moon would only have risen.

Night time activities form a major part of the festival and after the street party you can try out Lunar Yogahood, a hip hop yoga and meditation event that takes place from 11pm-2am; Eye of the Night, is a live performance and art session that runs until 12.30am and Vibe Under the Moon, is a club night that runs until 3am, headed up by local Nepalese DJs.

‘Reclaiming the night’ is an integral part of the festival as Filotico explained: “In Italy where I’m from, we spend a lot of time in public spaces, we treat them like home and you’ll always find people enjoying parks and squares, even at night.

“But here in the UK, although it’s changing, public spaces at night are associated with people drinking and people not feeling safe. I wanted to create a version of night where everyone can feel comfortable, where my mum could come over and feel happy being on her own.

“I want people who normally use these spaces to come to the event to carry on and do what they do normally, but to notice the art taking place around them and for other people to go to places they wouldn’t normally, at times they wouldn’t go out.”

If the idea of enjoying London under moonlight appeals to you, then other ‘late night’ activities include The Moon Festival Midnight Run on Saturday, July 20 – which kicks off at midnight, goes through to 6am and is facilitated by Poet Inua Ellams, while the closing night offers the chance to spend a night at a museum – as the National Maritime Museum hosts an evening of live performances and activities that celebrate the cultural history of the moon on Friday, July 26 from 7pm to midnight.

Don’t fret if you’re not a night owl, there’s still plenty of events to enjoy such as talks at the University of Greenwich and an art exhibition inside Charlton House.

On Saturday July 20, author Margaret Atwood is headlining, Maverick Women and the Moon, an evening exploring and celebrating the relationship between women and the moon.

While for older folk, the over 60s to be precise, there’s a special edition of the Posh Club Late, a tea dance style event that normally takes place in the afternoon but for the festival is having an evening edition, hosted by Mayor of London’s Night Czar, Amy Lamé.

Wellness is also a key aspect of the festival, so don’t be surprised if the celestial energies being generated by the event, give you a sense of renewal, simply by being there.

Filotico explained: “The 50th anniversary of human landing on the moon will no doubt spark people’s imagination and interest in what is possible. It’s a great time to look at your life, try something new, do something different or even embark on a new beginning, just like the festival is bringing something new to London and it’s just the start…I’m already making plans for next year!”

The Moon Festival runs July 19-26 2019 with events throughout the London Borough of Greenwich, free and ticketed. For more details visit: www.moonfestival.co.uk.

Privacy & Cookies: This site uses cookies. By continuing to use this website, you agree to their use.
To find out more, including how to control cookies, see here: Cookie Policy
← ACV Quiz 2019 – What kind of asian culture vulture are you? Test yourself…Now for the answers!
Year in Review: Our highlights of 2019 by Momtaz Begum-Hossain, Suman Bhuchar and Sailesh Ram →