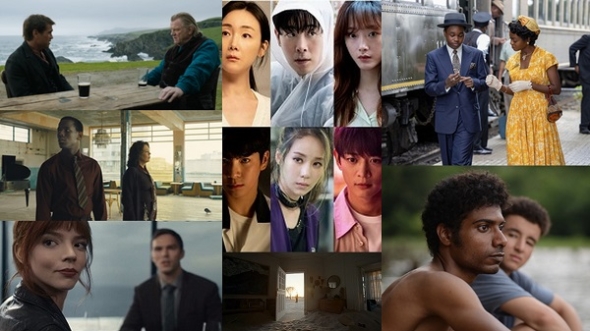 What we saw outside South Asian content, roughly in the order of viewing with the most recent at the top here…

Till – Quietly brilliant biopic of Mamie Till (Danielle Deadwyler) who awakens a nation to the cruelties and violence of racism in the South of the US, after her 14-year-old son Emmett (Jayln Hall) is brutally murdered there in 1955. Has much power and resonance in the age of George Floyd and Black Lives Matter. The battle must continue. It was the Mayor of London Sadiq Khan’s gala film. Director: Chinonye Chukwu 2 hours and 10 minutes Acv rating: ***** (five out of five) Releases this Friday (October 28)

The Menu – Engaging, humorous, piercing satire of the fine dining ‘experience’ type of restaurant. It was this year’s LFF Surprise film – ie people turn up and don’t know what film they will be watching. I was a shade underwhelmed – that was disappointment, perhaps, that it was not more of a ‘festival’ film. Ah. It was hugely popular and is likely to be a hit because it does have memorable and funny scenes. An easy target, methinks. Just saying. Director: Mark Mylod 1hr 45mins. *** Releases November 18

Summer with Hope – Very topical when you know this film is set in Iran and is centred around an elite swimmer, Omid (Madhi Gorbani). Off he goes with his single Mum from Tehran to the Caspian Sea to compete in a regional competition. But not all is as it seems, his coach, and his Dad are looming presences. It’s an intricate and well-woven story by Sadaf Foroughi, subtle and layered and beautifully shot and acted. ****

Empire of Light – A British film which is about the racism of the 1980s and centred around the troubled Hilary, played by a luminous Olivia Colman. Super support not least from Micheal Ward as Stephen. Colman, older, bored and drifting, finds excitement and romance when Stephen gets a job at the grand old seaside town cinema where she works. But this cross-cultural romance is upset by racism, strife and unspoken personal challenges – classy, broody, poignant. Director: Sam Mendes. **** Releases January 13 2023

The Banshees of Inisherin – Set on a remote island off the coast of Ireland in the early 20th century, Colin Farrell and Brendan Gleeson duel as Padraic and Colm, respectively. With shades of Martin McDonagh’s previous pairing in ‘In Bruges’ (2008), the two are splendid, Farrell sensationally so. But. Sorry, this isn’t worth a film but an episode of Larry David’s masterful, ‘Curb Your Enthusiasm’. Kerry Condon is interesting. The rest you might not remember, except for the absurd fingers-chopping ** In cinemas now (from October 21)

Bardo, False Chronicles of a Handful of Truths – Alejandro G. Iñárritu is one of the world’s great contemporary directors and therefore unavoidable – in some respects. Yes, this is long at nearly three hours, but it’s breath-taking in parts and marvellous. About an award-winning middle-aged, married Mexican filmmaker, settled in America, it’s a cinematic (auto?)-biographical dramatisation with much beauty, sophistication and poise. Anyone tuned to the post-colonial mindset will relate – the airport scene alone is priceless. **** Drops Netflix, November 18 (UK).

New Normal – This, while not being for everyone perhaps, has energy, talent and humour. Divided into chapters, it’s a satire on modern South Korean society and starts in an apartment with a smoke alarm engineer doing the rounds and visiting an attractive, single, middle-aged woman, against the backdrop of violence against such. Each chapter is a like a short film, but the themes overlap, as do the characters by the end. Inherently likeable? Director: Jung Bum-shik ***

No Bears – Jafar Panahi’s latest movie is close to being a masterpiece and is only qualified by the fact that the auteur is restricted from making the films he probably wants to – by the Iranian authorities. As is usual now, Panahi appears in this and it’s about village life and an engagement that pits a community against each other, with Panahi caught in the middle as he tries to make a film in neighbouring Turkey on a Zoom type application and innoncently requests his landlord and friend to film the engagement. Calamity both major and minor follows. Utterly superb and the title is very revealing and means a lot in an allegorical way, as does the film really. Was a late addition to LFF and premiered in Venice in September and releases in the UK on November 11. Just see it! *****