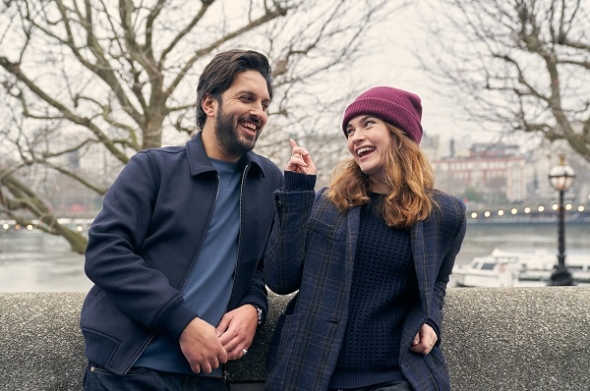 THIS is a lot of fun – there are lots of good moments but what really raises this film above the usual romcom is its cultural awareness.

And it does so very amiably and quietly and stylishly, may we say.

Formerly married to cricketer-turned politician, Imran Khan – Jemima Khan’s (nee Goldsmith) first debut fiction script is a triumph and is aided by an ensemble cast that is in the finest of fettles.

First up, Lily James, as Zoe, and Kaz (Shazad Latif), as the central couple, are excellent and then you have Shabana Azmi, an Indian icon, almost stealing the limelight of our confused ‘couple’ as the mother of Kaz – and if that wasn’t enough, her opposite number is none other than British icon, Emma Thompson, who is Zoe’s mum.

With direction from ‘Elizabeth’ hand, Shekhar Kapur, and an incredible and stunning score (album please!) by composer & musician Nitin Sawhney and helped along the way by the likes of uber-contemporary composer Naughty Boy, Qawwali king Rahat Fateh Ali Khan, (who has a cameo in the film), pop sensation Joy Crookes and Bollywood singer Kanika Kapoor, this as sure footed a film of this genre, as you will find this side of Lahore, baby.

It’s a tad predictable – actually you will know pretty much what will happen from the very beginning. But it’s twisty and funny enough to hold your attention.

But how do our star-crossed misty-eyed lovers get it so wrong in the first place?

Kaz is a doctor and thinks it’s time to settle down – Zoe next door might be pretty, and a childhood friend, as well as the girl literally next door – but she isn’t Asian, isn’t Muslim, is a bit dotty and all the rest of that, and well, you know what that means.

His parents (Azmi and Jeff Mirza as his Dad) are relaxed about their son’s friendship with Zoe. They don’t make anything (much) of it, perhaps in the full knowledge, that their son will only marry a Muslim woman – as Kaz is the dutiful son. He is, after all, (capital) D-Doctor – doesn’t drink, doesn’t smoke, doesn’t play the field…

Indeed, he is a good boy and so they enlist the help of a professional matchmaker played by the irrepressible Asim Chaudhry (of Chabuddy G fame). In a hilarious turn, he sets about finding Kaz a suitable match.

Oh, what a catch – Kaz is a doctor and at “the very top of the food chain”, so says our matchmaker. There’s a lovely joke about dogs – wink, wink, it’s in the trailer.

There are meetings with potentials here in London but eventually Kaz settles on a woman in Lahore – Maymouna (Sajal Aly), easy on the eye, (uber)-liberal (haha, wink, wink) and not averse to settling down in London.

On the other side, our amiable heroine, as you might expect, is very focused on her career as a filmmaker and is trying to pitch her next fly-on-the-wall documentary, when in a moment of some desperation, she tells some money men, she could follow her childhood friend’s journey into marrying a stranger. The hipster producers love it.

It’s a clever device allowing Zoe access to Kaz – who isn’t enraptured by the idea, but acquiesces to it, knowing that it’s important to Zoe.

Again, perhaps rather predictably, Zoe’s love life is a bit of wreck, she falls in lust with a guy or two, has a good friendship with her mother’s handsome vet but she feels something is missing.

Whatever it is, she knows it’s love and the heed over heels, lose your head variety and she wants it like any (in)sane person.

You can kind of see where this is all going – and in perhaps more of a Bollywood nod – there is also the estranged sister of Kaz. It comes a bit later into the movie – she married outside the community and has thereby been shunned and is persona non-grata.

Despite her giving birth, Kaz’s Urdu-speaking grandmother has never seen her great grandchild and curses her granddaughter and what she’s done. This is a little stretched for a family that seems very reasonable, understanding and modern – though of course it is quite plain – they prefer Kaz, as the male heir, to marry firmly within the faith.

We won’t spoil it for you – this film, which is just a little under two hours, is entertaining, insightful and deserves to be seen widely.

There will be some negative politics around this film – remember ‘The Big Sick?’ Yes, very much along those lines.

We hope Jemima’s ready for that – and if she’s half the writer here, she is – and really, it begs the question – what next, Jemima?

The film is being distributed by Studio Canal and is co-produced by Working Title, which made its early name off the back of writer, now writer-director, Richard Curtis, and films such as ‘Four Weddings and a Funeral‘ and ‘Love Actually‘.

‘What’s love got to do it’ enjoyed its world premiere this morning at the Toronto International Film Festival (September 10/11). It will go on general release in the UK on February 24 2023.