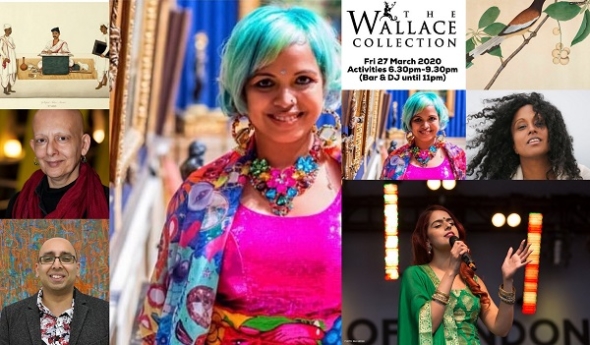 ROUNDABOUT this time (in London) we should have all been assembling to enjoying Wallace Late.

It was on this day (March 27) that the famous museum and gallery was to open its doors in the evening for a cultural extravaganza curated by Momtaz Begum-Hossain, a regular contributor to the pages of www.asianculturevulture.com, and a woman of many talents. Utilising her knowledge of arts, crafts, design and colour, and contemporary music, it promised to be a spectacular evening.

Centred around the ongoing ‘Forgotten Masters: Indian Painting for the East India Company’, exhibition there, as curated by historian and author William Dalrymple, the museum was opening itself up to music, chat, and multiple activities. It was some six months in the planning and world music star Susheela Rahman was to headline a mini-concert in the museum’s hallowed space.

Of course, the Coronavirus Crisis has scuppered all that, but as a recognition of a wonderful evening that should have been, we look at the exhibition itself and some of the themes that would have arisen in a casual panel discussion moderated by Sailesh Ram, editor and founder of www.asianculturevulture.com, Tabish Khan, art critic of the Londonist, Jaspreet Kaur, historian and poet and Suman Bhuchar, cultural producer and journalist.

The exhibition was the first of its kind – at least in Britain – and probably anywhere.

The exhibition allowed a unique and unrivalled glimpse into life at the time in India.

It is a forgotten part of Indian art history – almost all the painters whose works were on display were Indian. These locals were commissioned by officers of the East India Company to make these paintings and portraits.

In many ways these painters were the photographers of the day – recording and chronicling people, creatures, fauna and buildings of the time when the East India Company was slowly extending its reach on the sub-continent in the 18th and 19th centuries.

The company itself was wholly independent of the British Government of the time and was a major trading body – a powerful private enterprise.

From its very inception, it was created to accrue wealth and then, power as it was necessary to enforce its terms on Indians.

It both battled and negotiated its way into Indian princely states.

Some of these paintings chart these encounters – some have only Indians in them; while some painted the flora and fauna and served the growing disciplines of botany and natural sciences.

There was a tremendous range of paintings – from bats to Pujaris (priests) from flowers and fruits to grand monuments and buildings the Moghuls built a century or more earlier.

It was a fascinating collection and finally given the prominence and respect it so richly deserved.

While these painters were Indians, India itself has seen them as tarnished by their association with what became (over time) an occupying power and the East India Company itself was ruthless and cruel in its ambitions – as Dalrymple’s latest book, ‘The Anarchy – The Relentless Rise of the East India Company’ itself testifies.

However, it is clear from many of these paintings that relationships were more benign, and that Indians had a degree of freedom that was later denied to them.

ACV was particularly struck by the work of Vellapah of Vellore – his portraits of fellow Indians and one of himself even give an incredible insight into life at the time. Interestingly, he almost exclusively painted only Indians for his British masters.

In the end, there is much beauty, refinement and poise, and these masters surely shouldn’t be dismissed as colonial lackeys – they were important chroniclers of the time and had a lot to say about the society and the times they lived in – and we should respect and celebrate that…

If you’re interested in the background to the exhibition, Dalrymple presented a session at Jaipur Literature Festival at the British Library last summer and introduced the exhibition and discussed the works with academics. He is the one of co-founders of the literature festival, often dubbed the greatest literary show on earth and which routinely draws more than 250,000 book lovers to Jaipur every year. The British Library edition is London’s version of JLF.

Privacy & Cookies: This site uses cookies. By continuing to use this website, you agree to their use.
To find out more, including how to control cookies, see here: Cookie Policy
← Oscars 2020 preview – Londoner Cynthia Erivo who talked to us about her film ‘Harriet’ and British documentary ‘For Sama’ up for Oscars; Mindy Kaling among award presenters; Parasite, The Farewell, and Adam Sandler triumph at Indie Spirit Awards
‘Mushy – Lyrically speaking’ Chance to see much praised musical about stammer star Musharaf (‘Mushy’) Asghar online…as Ameet Chana talks about story behind story… →