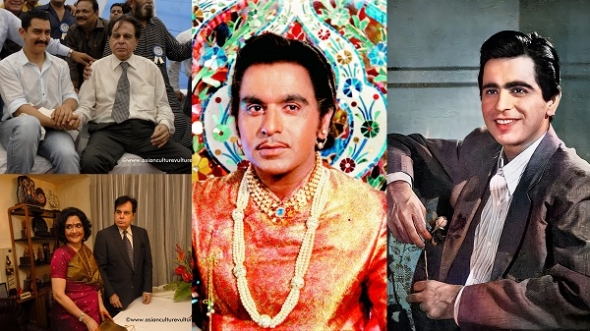 He was described as the ‘King of Tragedy’, but Dilip Kumar was among Bollywood’s first and most enduring stars and will long be remembered…

“WITH a heavy heart and profound grief, I announce the passing away of our beloved Dilip Saab, few minutes ago,” tweeted close friend, Fasial Farooqui yesterday (July 7). “We are from God and to Him we return.”

To the outside world and those who cherished and respected Dilip Kumar’s contribution to Indian cinema, he was simply, Dilip Saab/Sahib.

On the morning of July 7 (yesterday), India woke up to this tweet, which announced the demise of one of the greatest stars of Bollywood, Dilip Kumar, at the age of 98 in Mumbai. He died at 7.30am IST (Indian Standard Time).

The thespian had been admitted to the city’s Hinduja hospital on June 30 as he had trouble breathing. Fluids had accumulated in his lungs. But his condition was reported to be stable.

In early June, he had been admitted to the same hospital and discharged after a pleural aspiration procedure.

The news of the actor’s death came as a huge shock to people in India, who were used to seeing the veteran get in and out of city hospitals with his doting wife and fellow thespian Saira Banu in tow. In fact, on Monday (July 5), Banu had tweeted that his health was improving.

As television channels started beaming the news later yesterday, the Mumbai government announced that the actor would be buried with full state honours.

And, since covid protocols restricted the entry of people at funerals, many visited the icon’s Bandra home to pay their last respects.

On Twitter, condolences and tributes poured in from every direction.

The President of India Ram Nath Kovind wrote: “Dilip Saab summarised in himself a history of emerging India. He will live forever in the heart of India.”

Prime Minister Narendra Modi was moved to comment: “Dilip Kumar… will be remembered as a cinematic legend.”

Aamir Khan through his Aamir Khan Productions account on Instagram posted: “Thank you, Yusuf sahab, for the invaluable, priceless and unique gift you have given all of us through your work. For me, you have always been and always will be the greatest ever. Salaam.”

Akshay Kumar wrote: “To the world many others may be heroes. To us actors, he was The Hero. #DilipKumar Sir has taken an entire era of Indian cinema away with him.”

Bollywood Ajay Devgn’s remembered in a Tweet: “Shared many moments with the legend. Yet, nothing really prepared me for his passing away.”

Another of Bollywood’s biggest stars also added: “Best actor Indian cinema has ever seen and will ever see,” said Salman Khan. The tweet was accompanied by a throwback picture with Kumar.

Bachchan Senior, the Big B reflected: “An institution has gone… whenever the history of Indian Cinema will be written, it shall always be ‘before Dilip Kumar, and after Dilip Kumar.”

Even Pakistan Prime Minister Imran Khan tweeted about Kumar’s “generosity” in helping raise funds for a cancer hospital in his mother’s name.

Born Mohammed Yusuf Khan, in Peshawar, in 1922, the young man grew up in the city but the family relocated to Bombay (Mumbai) later, and acting was not on the young Dilip’s mind initially. He actually wanted to be a professional footballer and could sing.

At one point, he even sold sandwiches in Pune and was from a humble background. It was Raj Kapoor, who told him that he could be a star. The two lived close to each other and even went to the same college.

Later, on the advice of actress Devika Rani, Khan changed his name to Dilip Kumar.
His first movie ‘Jwar Bhata’ (1944), was produced by the production house Bombay Talkies, a venture of Rani and Ashok Kumar.

Then came director K Asif’s megahit ‘Mughal-e-Azam’ (1960), which also made news because of Kumar’s romance with his co-star Madhubala.

It was believed he also married another woman named Asma Rehman but the union ended in 1983. He had no children.

His movie roles earned him the titles, ‘Tragedy King’ and ‘King of Romance’.

He leaves wife Banu and a nation in deep mourning for one of its immortal screen heroes.

The actor may have passed away, but his legacy is bound to live on forever. Rest in peace Dilip Saab.