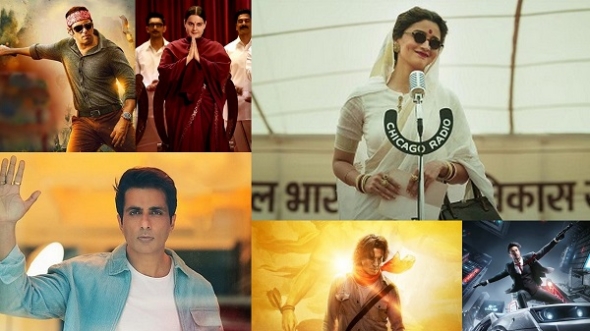 It’s hardly business as usual as the country reels under the weight of covid and there are hopes that the disruption won’t last long, that films will be back on the big screens and actors will return to sets, while some are exercising their humanity…

How are you all doing out there?

The whole world is watching us…yes, the same pictures fill our TV screens too, the country is in a bad way. Today, India reported more than 350,000 cases and more than 3,000 deaths.

Mumbai is slightly better off comparatively – the second wave started here on February 11 and we are now clocking only half of what we did initially – there is some slight improvement.

However, the spirit of Mumbai lives on. Many Bollywood actors have been using their time generously giving to charitable causes during the current crisis.

Megastar Salman Khan has been distributing food to the needy through his Being Human Foundation.

Ajay Devgn has donated ₹10 million (about £100,000) to the Mumbai municipality to set up a covid facility. Suniel Shetty has been helping with oxygen cylinders.

But perhaps one Bollywood name really stands out when it comes to helping those in dire need – Sonu Sood. He started work last year through his Sood Foundation and during this crisis – he has ramped it up to meet the challenges and requests of help. With just over nine million followers on Instagram and more than six million on Twitter, he has responded to individual requests for assistance for those whose family members are in distress with covid.

His most recent and substantial deed was airlifting a covid patient from Nagpur in central India to Hyderabad in South India for treatment.

The family responded with gratitude and considerable emotion leading Sood to conclude that such help was more satisfying than delivering a ₹100 million (£10m) film.

While the Indian Premier League Cricket (IPL) continues and provides entertainment and diversion to those stuck at home and not consumed personally by the crisis, the film industry on the other hand has been hit hard again – as many cinemas have been forced to shut down.

Out went those films earmarked for cinema releases – Kangana Ranaut’s portrayal of six-time Tamil Nadu chief minister and former cinema icon the late Jayalalithaa in ‘Thalaivi‘ – which had been scheduled to be in cinemas last Friday (April 23) got dropped; also falling by the wayside was ‘Satyameva Jayate 2’ with Bollywood hunk John Abraham reprising the vigilante role despite being earmarked for a May 13 release; other films fell too – ‘Haathi Mere Saathi’ with ‘Baahubali‘ star Rana Daggubati in a battle between nature and one man’s greed; ‘Bunty Aur Babli 2’ Rani Mukerji, Saif Ali Khan are two small-time scamsters trying to find their feet after being busted; and ‘Chehre’ pairing Amitabh Bachchan and Emran Hashmi in a lavish mystery murder caper, have all been pulled for the time being.

Perhaps the most spectacular sign of the times was the eagerly anticipated Salman Khan blockbuster Eid-scheduled release, ‘Radhe: Your Most Wanted Bhai’. The film is a remake of the 2017 Korean film, ‘The Outlaws’ – where police have to keep apart warring gangs, fighting a vicious turf war.

This Khan almost unwaveringly has provided movie masala magic every Eid – with fans and festive cinemagoers flocking to theatres. With the onset of covid and returning uncertainty at best and restrictions on numbers in theatres, Khan signed an online deal but distributors met Khan and requested him to change the decision. The superstar, who is known to be a large-hearted person, obliged and it was announced that the film would release on Eid 2021 on Zee’s pay-per-view service Zeeplex, leading direct to home services, as well as in theatres in India and overseas. With an expected May 13 release in India, it does raise the possibility that it could screen in UK cinemas from May 17, when they are expected to be able to open up again.

The Maharashtra state government put a stop to all filming earlier this month but had indicated that filming might be able to resume from May 1. This seems highly unlikely now, and even in Film City in Hyderabad where many of the most lavish and extensive sets have been created in the absence of foreign location shooting – such as for Salman Khan’s ‘Tiger 3’ which had been scheduled to shoot in Turkey but can’t now – there isn’t much activity either and the local government has imposed a local curfew to curb any further spread of the virus. This espionage drama pits two special agents, Tiger (S.Khan) and Zoya (Katrina Kaif) together in the continuing blockbuster franchise.

Adipurush
Ancient epic based on Hindu ‘Ramayana’ story
Stars: Prabhas, Deepika Padukone and Saif Ali Khan
Started filming in February but no word on when it will resume.

Gangubai Kathiyawadi
Based loosely on the real-life story of a woman who rises high in the crime world
Stars: Alia Bhatt, Vijay Raaz, Indira Tiwari
Set to release on July 30, filming has ceased with 70 per cent of the film reportedly complete