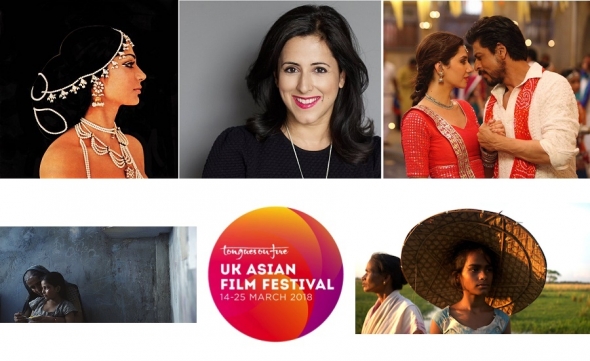 TWO STARS of the silver screen – one present and one past – will grace the 20th edition of a film festival that started out as Tongues on Fire.

Just this year it’s extended its reach across the country – and is now known as the UK Asian Film Festival.

The fest will again highlight the contribution and achievements of women throughout the South Asian film industry, both at home in the UK and further afield.

The festival, spread across Edinburgh, London, Manchester, and Leicester, will run from March 14-25, and screen only F-rated films – these are productions where women are either involved significantly behind the camera or in front of it, with the content driven and informed by progressive ideas and gender equality.

A special awards ceremony and opening gala dinner at the May Fair Hotel in London on March 14 will inaugurate the festival with a very special line-up of star guests and personalities from the world of film, and the wider arts.

Among the screen icons to grace the gala opening dinner will be Mahira Khan, who is from Pakistan but is increasingly an international figure.

Her last film which dealt with the subject of rape, ‘Verna’, will screen at the UK Asian Film Festival.

She made her Bollywood debut alongside the Badshah himself, Shah Rukh Khan, last year in the blockbuster, ’Raaes’.

The star was named a L’Oreal ambassador last year too – the first ever from her country and will feature in Q&As post the screening of ‘Verna’ in Leicester on March 15, and the following day in London at Regent Street Cinema in London.

Fiercely independent, not just as a divorced single mother, she told acv in an interview before the release of ‘Verna’ last year that she was committed to making films that could make a difference and change mindsets.

Joining Khan, for the opening, will be one of Bollywood’s top names of the 1970s – Simi Garewal.

One of a new breed of actresses who emerged in that period, Garewal appeared in the English language ‘Siddhartha’ (1972) – originally adapted from the global best-selling novel by Herman Hesse – alongside screen legend, Shashi Kapoor. The film contained a nude scene that outraged India’s censors.

She later went onto carve out a career as a talk show host in Bollywood. Garewal will lead a special tribute to Kapoor who died last year.

Also in attendance will be broadcaster Anita Anand, who wrote the pathbreaking book, ‘Sophia: Princess, Suffragette, Revolutionary’ about Princess Sophia Duleep Singh, who was a prominent suffragette in her day, and later an early advocate of Indian Independence. Her contribution was obscured but Anand’s book has reawakened interest in a powerful feminist figure.

Though born into a world of luxury and privilege as one of Queen Victoria’s charges, she found her voice through her father who was the last Sikh King, Prince Duleep Singh. His family once ruled a vast empire that stretched from Delhi to Kabul before the British set about taking over.

Pushpinder Chowdhry, founder and director of UK Asian Film Festival, said: “We are delighted to be celebrating the festival’s 20th anniversary by expanding nationally and giving audiences across the UK the opportunity of engaging with our programme of screenings, guest talks and events with a strong, feminist theme.

“From its inception, the festival has always championed gender equality in cinema, launching 20 years back at a time when there was but a handful of Asian women filmmakers and the scope of female roles was restricted to women of a certain age, confined to certain archetypal parameters.

“We are finally seeing a shift in this, as women continue to create a space for themselves in South Asian cinema, redefining and expanding their roles both in front of and behind the camera and on their own terms.

“We continue to celebrate those achievements with a rich showcase that represents the ever-evolving contributions and representations of women to cinema.”

The opening film of the UK Asian Film Festival will be ‘Ajji’ (‘Granny’, 2017). This grandmother figure proves an unlikely character of reckoning following the assault of her nine year old granddaughter. Director Devashish Makhija will join the audience for a Q&A following the screening at Regent’s Street cinema, London on March 15.

For more details of tickets and screenings, see www.ukasianfilmfestival.com