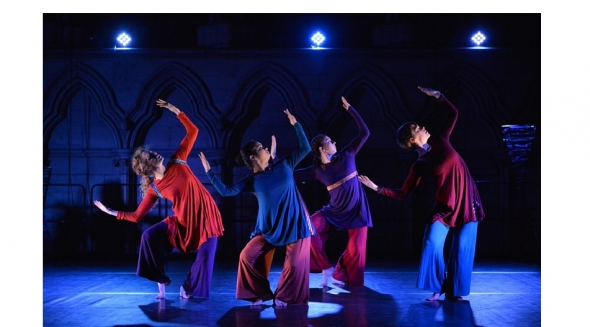 From the sounds of Asian underground to a new work inspired by ancient tales, one musician is caught in the swirling winds…

HE WAS ONE HALF of a global superstar pairing.

Their music rocked the world for a time, ushering in a new and arresting sound – a heady mix of drum and base, electronica, hip hop and Indian classical rhythms and notes.

Now Shri – one half of Badmarsh and Shri – is responsible for a different type of beat altogether – or at least that is what it looks like on paper.

“It’s a mixture of electronica and Indian classical and everything in between,” he told www.asianculturevulture.com. “It’s a good description of where I am musically.”

On Thursday (April 10) and Sunday (April), audiences will be treated to a performance of “Rudra”, which Shri, Shri Sriram, has composed.

It is a stirring mythological/spiritual tale, centred around the character of Rudra (also known as Shiva in some contexts) – and it’s a story of slights and reconciliation, involving a god who is both tormented and can torment like no other.

“I just thought I will put the feeling of Shiva in my head and what came out was an extremely electronic base for the music,” explained Shri. “But it was a bit like a foundation for a house, it was just a concrete square and cold and not beautiful and then there’s other music and the dancers and the power of Rudra/Shiva and it becomes a home and there are beautiful curtains, sofas and paintings.”

Four dancers take on the challenge of expressing Rudra’s innermost thoughts and feelings and tackle his subsequent negotiations with the world around him (see below).

Choreographed by Sonia Sabri and conceived and staged by Surpriya Nagarajan’s Manasamitra dance company (based in Dewsbury, Yorkshire), the two latest shows represent the end of a four-date spring tour in the North of England.

There’s a great variety of emotion in the piece which has also been performed to live music.

Shri said: “I went through the basic headlines of each chapter, keeping in mind the love, and flirting and meditation (in it). And then Shiva being disturbed from it and then the fury that came from the disturbance of things both not going his way or getting his own way – and then the regret and lament of his actions.”

Originally conceived as more of a collaborative piece, Shri’s music has provided the structure while Sabri and the musicians have added and improvised more.

“It was supposed to collaborative but various timings didn’t work out,” explained Shri. “It has a very contemporary sound, typically my sound, which is always coming from a tradition and rooted in tradition – it’s not a fusion.”

He said that the ‘transition’ from hip dance track musician to classically inspired composer is not so in reality – that is just a view from the surface.

“Badmarsh and Shri was a very fierce part of my llife, and I am working with another musician Bugge Wesseltoft and all this music becomes part of life’s processes and it’ not that I don’t follow the music of my past. I used to do hard rock and that energy is still with me.”

Over the years, Shri has been composing more and more whether it’s the promotional track for the film “Life of Pi” in India or a critically acclaimed score for a Google TV advert in India, illustrating how tradition can blend with the contemporary world of the internet or for theatre, it shows a musician still very much at the cutting edge and on the crest of a continuing firmament.

“I wear a different number of hats, I produce, I love composition, I still play live; I am working on a new album, and working with other people and doing a collaboration with producer and mix engineer Jagz Kooner. I need different hats, I can’t work with just one, if it was just one thing I would get bored.”

His next big project is a possible collaboration with a Yorkshire Brass Band.

Badmarsh and Shri created a movement of sorts – “the Asian Underground” and along with Nitin Sawhney and Apache announced a distinctly Indian note to many modern forms of music breaking through in the early part of this century.

“It’s not like I switch off one thing and it’s a complete revolution,” he argued. “I always wanted to be a composer through Badmarsh and Shri.”

Now the environment may be different but there’s still something stirring and exciting going on and his work with Manasamitra continues to evolve too.

Related stories
Shri and Shiva mixing it up in Shivoham