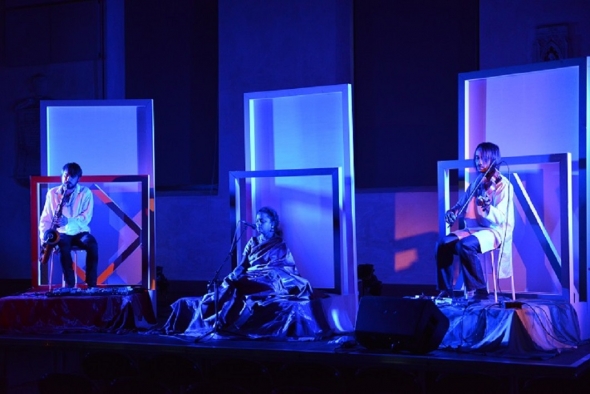 Music aims to be a total sensory experience…

INDIAN classical vocals will blend with a more contemporary sound to produce something quite different and innovative, believe the musicians behind “Shivoham”.

One of those is Shri, one half of the famous 1990s Asian underground pairing of Badmarsh and Shri.

Just recently he composed the promotional music in India to the 2013 Oscar-nominated film, “Life of Pi”.

Two other musicians led by Carnatic vocal specialist Supriya Nagarajan will join Shri to perform the hour-long “Shivoham” at the Otley Court House on Saturday (March 1).

Shri and Nagarajan know each other from Mumbai and the music community there.

Nagarajan told www.asianculturevulture.com : “I have known him for a long time, he is from Bombay (Mumbai) and I am a Bombay girl and his music has always been powerful and I’ve always wanted to work with him.”

Produced by Nagarajan’s Manasamitra, “Shivoham” will also get an airing at Grimsby Minister next Saturday (March 8) and the fusion piece aims to broaden people’s perceptions and deliver them on a journey.

“We want to capture the emotions behind a journey. There are moments when the music is quiet and peaceful and other times when it is more disturbing,” Nagarajan explained.

Inspired by Shiva and his position within Hindu culture as the God of gods, the piece looks to capture the full range of emotions you might expect from just such a figure.

For Nagarajan, it is also about absorbing and inculcating the many influences she feels around her in Dewsbury, where Manasmitra, the company she heads as artistic director, is based.

“A lot of the community are familiar with Indian classical music – but there is also a lot of different music in the area and there are musicians from different backgrounds too and while “Shivoham” has spiritual influences, it also has a very contemporary sound,” she pointed out.

A former banker, who has been a full-time musician since 2006, she wanted her music not just to represent the past but also be shaped too by her cultural and musical experiences in Britain.

“Living in this country there’s a lot of music from other cultures too – Chinese and African (to name just two) and it’s about taking something such as classical music and bringing it to a more diverse audience by having a fusion and being open.”

It’s not just about the music as “Shivoham” also incorporates lights, scented aromas and has a special set design.

On violin for “Shivoham” is Kartik Ragunathan, a London-based violinist whose musical influence is both contemporary and Indian classical – having learnt Hindustani vocals from the age of five.

First performed in November at the National Centre for Early Music in York, Nagarajan hopes “Shivoham” can be taken to other parts of the country and wider.

“We do a range of work at Manasamitra – working on site specific pieces with the organisations like the National Trust and sometimes work alongside dancers and we have performed internationally.”