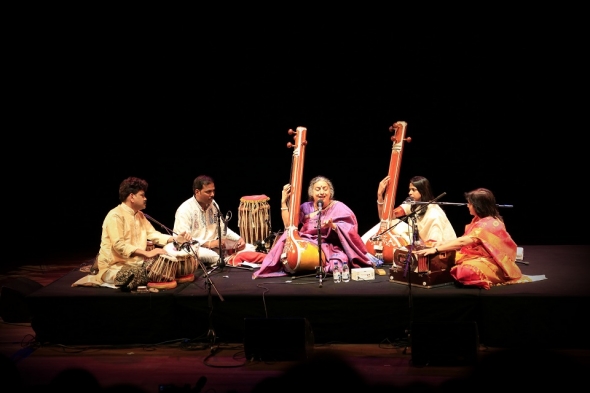 INDIAN classical music sometimes gets a bad rap or should that be rep?

The Sama Arts Network concert on Saturday (December 14) at the Queen Elizabeth Hall on the South Bank in London, featured two very different and distinctive set of artistes, both under the banner of “Mystic Voices: The Bhakti tradition” – spirituality in music, words and poetry.

Bhakti is a form of traditional Hindu worship, similar in the way hymns are to the Christian tradition. They denote faith, belief and a yearning to celebrate the divine in verse and music.

Saturday’s concert showed how differently these can be served by different traditions within the Indian classical music repertoire.

The first was led by Ashwini Bhide Deshpande (pictured centre above), who sings in ‘Jaipur-Atrauli’ Khyal vocal tradition. Much of Deshpande’s near two-hour set was delivering songs that celebrated the life and persona of Lord Krishna.

This most playful and romantic of gods is given his rightful due. Deshpande’s music is full of sweetness, light and melody. It is richly compelling and a treat for the soul that imagines in the world of music, there can only be beauty and tranquillity.

It is almost like one of the birds watching and recounting Lord Krishna’s exploits as he teases and charms the Gopis, the cow heard girls who delight in his vim and loving entreaties. It is important to remember that these are innocent overtures, abundant in generosity and spirit – reflective of the kind of yearning inspired by two young souls infatuated with each other but not yet ready to commit in adult ways.

Deshpande is regarded as one of the finest exponents of her art, and it is not difficult to understand that. Her voice is evocative of a world quite different to ours: filled with beauty, poise and soft hopes.

She was resolutely supported by Vishwanath Shirodkar on tabla and Seema Shirodkar on harmonium and Hanumant Rawade on percussion and majira.

The second half was performed by the Gundecha Brothers, who delivered another near two-hour set on Dhrupad (a form of sung poetry in Hindustani, popular in North India).

First developed in the royal courts of ancient north India, Dhrupad comes from a very different style and ethos.

It is perhaps less overtly religious (or Hindu) but still encompasses many of deepest questions and dilemmas – and the Gundecha Brothers have been innovative in the way they have adapted Dhrupad to incorporate the popular poetry of figures such as Kabir, Tulsidas, and Padmakar, Nirala, as well as others. Many of these were the foremost poets of their day and their work continues to inform and inspire both popular and high art (which has less of a clear demarcation in Indian tradition as it does in the West).

Perhaps, however, it should be said that Dhrupad is not for everyone and that unlike Deshpande’s set, to the untrained or uninitiated, it can seem quite removed and distant. It might be the difference between popular jazz (which is easy listening essentially), and free jazz (which needs some appreciation of the technical and nuanced modulations at play).

It is rather more austere and formal and has less of the obvious qualities of bhakti or devotional music. But what it may lack in direct appeal, it makes up for in technical virtuosity and sheer concentration.  As such it is absorbing to observe: Umakant and Ramakant Gundecha, accompany their vocals with expressive hand gestures and sometimes telling facial displays.

A long vocal set without pakhawaj (barrel-shaped two sided hand drum) lead to a low-key, stiff, rather testing opening heightened by the tonal background music offered by the tanpura (played by the daughter of one of the Gundecha’s, Dhani, and Hungarian student Vass Mariann Linda). It did seem a bit funeral like, punctuated by moments of tremendous technical vocal virtuosity.

The second half of the Gundecha’s brothers set was more upbeat as it went into ‘battle’ with the pakhawaj and delivered a rousing finale.

Indeed both sets of performers left thoroughly satisfied audiences who offered their love and appreciation with standing ovations.  While the hall was not totally full, there was a sizeable crowd that stayed almost to midnight for the end of the concert.

It only goes to show there is a healthy and committed following for Indian classical music in Britain, whatever the particular tradition.

Jay Visvadeva, the man behind the concert, thanked his sponsors, Air India and said that after something of a hiatus, there will be more in the coming summer.

Privacy & Cookies: This site uses cookies. By continuing to use this website, you agree to their use.
To find out more, including how to control cookies, see here: Cookie Policy
← ‘How To Be Human – Life Lessons by Buddy Hirani’ – book is hit among film glitterati and comes to the UK now…
Nicholas Prasad on his role in contemporary ‘Mafia’ setting for Shakespeare’s ‘Much Ado About Nothing’ →