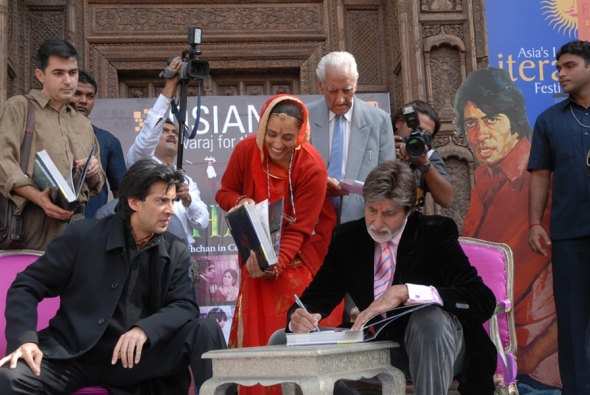 IN THEIR countdown to the five-day Jaipur Literature Festival which starts on January 17, organisers have confirmed the attendance of more than 130 authors.

Among the stars will be global feminist icon Gloria Steinem and world literary sensation Jhumpa Lahiri, shortlisted this year for the Booker prize for her novel, “The Lowland”.

In 2012, the festival was hit by controversy when Salman Rushdie was scheduled to speak, but was prevented from doing so following threats to his safety.

Set to make an appearance at the 2014 festival is international actor Irrfan Khan who hails from the regal city in the state of Rajasthan in north-east India. He will join “Monsoon Wedding” writer Sabrina Dhawan on a discussion about screen writing.

Among those names familiar to British audiences, will be Rupert Everett, actor and writer, Geoff Dyer, novelist and critic, Mary Beard, historian and TV presenter, and Samantha Shannon, author of the best-seller, “The Bone Season”.

Indian politicians Murli Manohar Joshi and Shashi Tharoor are also set to speak at the beginning of what will be a general election year in India and the literature of Rajasthan will accorded a special place in some sessions for 2014.

Non-fiction is well-represented as British authors Adrian Levy and Cathy Scott-Clark talk about their book on the Mumbai terror attack on 26/11/08, with “The Siege” (interviewed here on http://asianculturevulture.com/portfolios/inside-taj-attack-mumbai-terror-261/)

Entering its 7th edition and stung by criticism in the past of only showcasing foreign writers, the 2014 fest has a strong list of Indian writers in English and some in native tongues, with a special section on the diversity of writing in Indian languages.

Among those Indians writing in English to appear at the festival, and known abroad, are Amish Tripathi, author of the hugely successful and fictional Shiva triology, and playwright Mahesh Dattani (“Dance Like a Man”). Tripathi spoke to us on his first visit to London in October for the South Asian Literature Festival in London (http://asianculturevulture.com/portfolios/wisdom-wit-books-amish/ )

Authors such as Geetanjali Shree and Narendra Kohli are well known in India for writing fiction in Hindi.

Indian sport fans will be treated to an appearance by Mary Kom, the country’s Olympic bronze medallist, who will discuss her biography.

The festival will also see the announcement of the winner of $50,000 DSC South Asian Literature Prize. Six authors whose work is about the region have been shortlisted for the prestigious award.

They are Anand for the “Book of Destruction“, (translated from Malayalam by Chetana Sachidanandan); Benyamin for “Goat Days”, translated from Malayalam by Joseph Koyippalli); Cyrus Mistry for “Chronicle of a Corpse Bearer”; Mohsin Hamid for “How to Get Filthy Rich in Rising Asia”; Nadeem Aslam for “The Blind Man’s Garden” and debutant Nayoomi Munaweera, for “Island of a Thousand Mirrors”.

The winner will be announced on January 18 at the festival.

Namita Gokhale, festival co-director, said: “The Jaipur yatra will continue to celebrate books and ideas, readers and writers in an open, joyous and spontaneous space and to uphold the spirit of democratic dialogue and exchange.”

William Dalrymple, festival co-director, added: “In less than a decade Jaipur has become the largest free literature festival in the world, and the largest litfest in the Asia-Pacific region.

“It has done this by consistently bringing together at Jaipur the greatest literary minds on earth and presenting them to the public, rich and poor, young and old, desi and firangi, completely free of charge.”

The festival takes place in one location, at the Diggi Palace and is open to anyone but registration is necessary, either before through the website or at the entrance.