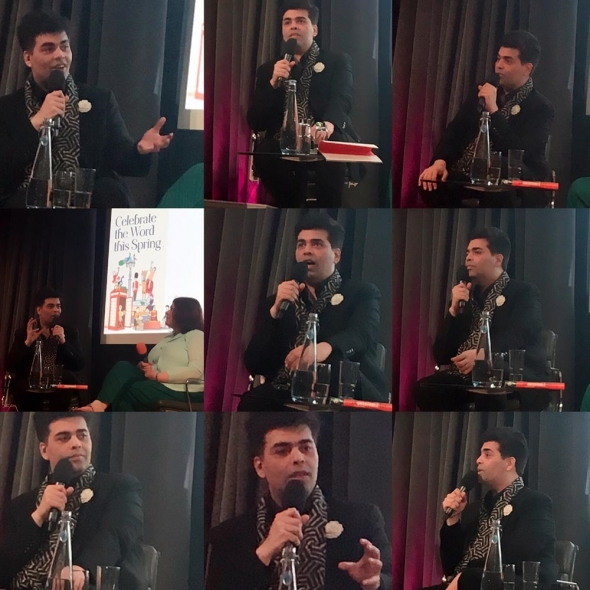 Modern day Bollywood without Karan Johar? It’s unthinkable. The last 15 years of Hindi cinema can be charted by the legacy of K-Jo’s love stories. From the 1990s nostalgia of his debut ‘Kuch Kuch Hota Hai’ (‘KKHH’) through to timeless classics like ‘Kabhi Khushi Kabhi Gham’(‘K3G’) and ‘Kal Ho Naa Ho’, Karan’s films take you to extreme worlds of glamour and style while pulling at your heart strings with their focus on family and relationships.

Away from the moviemaking world Karan is also a fixture on Indian television thanks to his show ‘Koffee with Karan’ where he chats to Bollywood’s great and the good, but he himself has remained quite elusive until now.

In ‘An Unsuitable Boy’, Karan’s biography, co-written with Poonam Saxena, he dispels the myths that surround him, while opening up with honesty about his life, family and friendships and how each of his films have shaped him. Revealing a taste of what’s inside the book, Karan was interviewed live on stage at the Zee Jaipur Literature Festival in London by Bollywood and London University professor of Indian cultures and cinemas, Rachel Dwyer. It was enlightening…about the man and his methods…

Karan Johar: ‘The year 2001 was possibly the biggest that Indian cinema had ever seen. As well as ‘K3G’ you had the release of ‘Lagaan’ and ‘Dil Chahta Hai’. But it was my unfounded arrogance and delusion that I thought why are the other films even releasing that year?

Who’s going to watch a film about playing cricket? I knew Farhan Akhtar as a kid and he was pretty much like the main character of the film, ‘Wake Up Sid’, someone who had no direction and I said “what is he going to make?”, he’s making this indie art-house new age thing – I thought that I was going to sweep the awards and people would just bow down in respect to my cinema: the exact opposite happened.

When I watched ‘Lagaan’ I realised that’s what you call proud cinema and I when I saw ‘Dil Chahta Hai’ I thought that redefined cool, so by the time it was my turn in December at the end of the year I was old wine in a new bottle.

I wept at least five times in that week reading the reviews. Everyone would say the most nasty things about my film “Oh, we’ve seen this, it’s just a family film,” but I felt I had invested all my emotions into that product and it was just amounting to nothing – of course the film went on to do well but I was scarred. That’s when I learnt you should not be delusional as delusion is a disease with no cure.

After I heard people saying that Farhan Akhtar was the new age cool of film, I had the feeling I could do something younger, which is when I wrote Kal Ho Naa Ho though initially I was wary of directing it I didn’t think I was ‘cool’ enough. I remember watching Amelie in London and I loved the narrative: in some ways Kal Ho Naa Ho was born as a result of that film as it inspired me to tell a story in a different way. Though I originally wrote a very different ending. In my initial version Shah Rukh’s character disappears just like how he appeared one day but when my father saw the narrative he was like, ‘he’s a superstar, you’ve got to show him die, and you must make the ladies in the audience cry.’ So we made him die and it took 20 minutes but if you ask me, those are the worst 20 minutes of the film.

A lot of people said to me “how can you endorse infidelity?” But I can’t endorse something that’s already sold.

Adultery exists, it’s in everyone’s lives we just brush it under the carpet. I learnt that is was difficult for couples to watch this film because they couldn’t admit to liking it because then they’d have to explain why they liked it. And you couldn’t watch it with your family as then elders would feel uncomfortable. It did well in the west because people watched it in solitude.

I remember watching a preview the day before it released and there was a traditional married couple in front of me. They got up and left after the scene where Shah Rukh and Rani are in a hotel room when they realised it wasn’t a dream sequence. Maybe another Director like Mani Ratnam could have done a better job but I wanted a challenge and I wanted to tell that story.

‘Ae Dil Hai Mushkil’ – His most honest piece of filmmaking

Unrequited love is not sad it’s empowering: love is empowering. I’ve been through these feelings and I felt an entire narrative had never been made taking those emotions right though and not succumbing to a happy ending. There was a negative response about why did I kill her at the end but when love is not reciprocated, you’ve got to kill the character. That’s what I’ve felt many times in my headspace, when I didn’t get the love I felt they must die.

It’s the only honest piece of work I’ve made and it’s the film I’m least embarrassed about. I feel that it was created within me and I executed it exactly the way I imagined it, I wouldn’t change a beat of the film for anything.

Life outside film – becoming a father to surrogate twins

My decision to bring those children into my world was not just a self less decision it wasn’t just because there was an empty space that needed to be filled. It was because I felt I have the ability to love and I felt that the reserve of love was lying there, not being leveraged and not being nurtured. I knew that I could nurture that love and give that love, and that’s why I wanted to have children.

I knew it was decision that may not be conventional and I knew it would go against the grain and I was worried what my mother would feel. But these are all thoughts that you should never have. Do not conform to convention. All you will do is end up regretting it. As for being a father I can’t explain it, it’s beyond overwhelming. Being a parent is knowing you have a life that you’re responsible too and accountable to and for me knowing that the reserve of love I have finally has a channel, is the most beautiful feeling in the world.